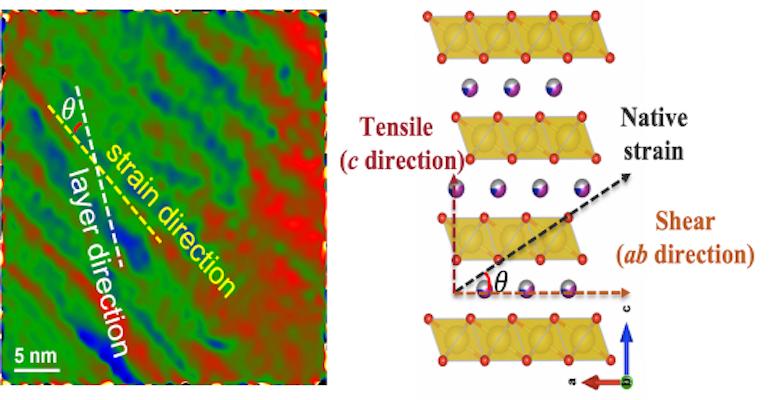 Transition electron microscopic image of newly synthesized cathode material for sodium-ion batteries (left). A schematic shows strain and stress-induced into the layered cathode structure when cycling (right)
Researchers at the Department of Energy have made headway in creating better and less expensive energy-storage devices for commercial use.

U.S. Department of Energy (DoE) researchers have made an important discovery that they said can improve the performance of a battery chemistry eyed to replace lithium-ion batteries for electric vehicles (EVs).

A team at the DoE Argonne National Laboratory has found a key reason why the performance of sodium-ion batteries is limited after numerous charge-discharge cycles. The finding paves the way for new designs of these types of batteries that can be used to power EVs as well as for other commercial uses, researchers said.

Related: Could a Novel Graphene Anode be the Key to Future Sodium-Ion Batteries?

Sodium-ion batteries are desirable options to replace lithium-ion batteries in the future for several reasons. Sodium is a naturally abundant material and thus has far less impact on the environment as well as is less expensive to source than lithium. Moreover, when cycled at high voltage (4.5 volts), a sodium-ion battery has a high capacity of energy storage at any given weight or volume, researchers said.

What the team specifically found is that there are defects in the atomic structure that form during the steps involved in preparing the cathode material in a sodium-ion battery, researchers said. These defects eventually lead to the equivalent of a structural earthquake in the cathode, which in turn results in catastrophic performance decline during battery cycling, they said.

This knowledge can now help battery developers adjust synthesis conditions of the material to fabricate superior sodium-ion cathodes for devices that will result in higher performance, researchers said.

“Our insights are extremely important for the large-scale manufacturing of improved sodium-ion cathodes,” said Khalil Amine, an Argonne distinguished fellow, in a press statement. ​“Because of the large amount of material involved, say, 1000 kilograms, there will be a large temperature variation, which will lead to many defects forming unless appropriate steps are taken.”

Researchers engaged in their research at Argonne’s Center for Nanoscale Materials (CNM) and Advanced Photon Source (APS), where they synthesized the cathode material in real-time, allowing them to track changes in its atomic structure.

During this process, material fabricators slowly heat the cathode mixture to a very high temperature in air, hold it there for a set amount of time, then rapidly drop the temperature to room temperature.

What researchers found in their analysis was that during the rapid temperature drop, the cathode particle surface became less smooth and exhibited large areas indicating strain. The data also showed that a tug-of-war effect in these areas happens during cathode cycling, which causes cracking of the cathode particles and performance decline, they said.

More study led to the discovery that this degradation intensifies when cathodes were cycled at high temperature, or 130 degrees Fahrenheit, or when the device was charged quickly, i.e., one hour versus taking 10 hours to charge, researchers said.

The team published a paper on its work in the journal Nature Communications.

Researchers plan to pair this work with earlier research—which resulted in an improved anode for sodium-ion batteries--to achieve a 20 percent to 40 percent increase in performance in future devices, said Guiliang Xu, an assistant chemist in Argonne’s Chemical Sciences and Engineering division who worked on the research.

“Also important, such batteries will maintain that performance with long-term cycling at high voltage,” he said. This can potentially allow for a longer driving range in more affordable electric vehicles and lower costs for energy storage on the electric grid.

Replacing the Graphite Anode Improves Cost, Performance of This Sodium Battery
May 16, 2021