Solving One of the Barriers to Commercializing Solid-State Batteries 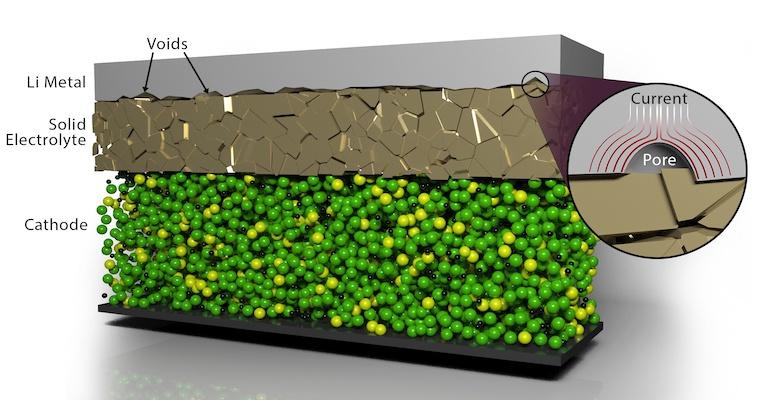 Researchers at the Department of Energy Oak Ridge National Laboratory (ORNL) have developed a low-cost electrical pulse method to improve the contact between materials in layers of a solid-state lithium battery. The research solves a key problem in the quest to develop more energy-dense batteries.
Research by the DoE for a stable manufacturing process providing at least twice the energy density of lithium-ion batteries in a smaller footprint.

Researchers at the Department of Energy (DoE) have made a significant step to removing a barrier to the successful commercialization of solid-state batteries for energy-dense applications like EVs as well as for other electronic devices, they said.

Scientists at the DoE’s Oak Ridge National Laboratory (ORNL) have developed a scalable, low-cost method to improve the joining of materials in these storage systems, which are known to have safety, efficiency, and longevity benefits over current lithium-ion designs.

Related: Because Battery Manufacturing Went to China, US Firms Have an Opportunity to Innovate

Getting materials to properly join and remain stable during repeated charging and discharging cycles—a phenomenon called contact impedance--has been a challenge to broad-scale manufacturing of solid-state batteries, according to researchers. These batteries use a solid electrolyte material as opposed to a liquid electrolyte, which is what most lithium-ion commercial batteries use today.

Solid-state batteries can provide at least two times the energy density of lithium-ion batteries in a much smaller footprint, a key reason scientists are keen to create a stable and reliable manufacturing process for them as energy-storage needs for more sophisticated applications grow.

Pulse Instead of Pressure

Until now scientists have mainly focused on applying high pressures among other methods to join the materials in solid-state devices, they said. However, this pressure can damage battery components and also requires the use of an expensive aftermarket application that needs to be re-applied periodically to extend the battery’s life, researchers said.

The new method they developed is both non-destructive and low-cost, using a heat-generating current rather than force, providing a safer alternative, explained Ilias Belharouak, co-lead on the project and head of the Electrification Section at ORNL.

“This method will enable an all-solid-state architecture without applying an extrinsic force that can damage the cell and is not practical to deploy during the battery’s usage,” he said in a press statement.

They found that applying short, high-voltage pulses led to increased contact at the interface of the materials while resulting in no detrimental effects, with the current surrounding the lithium metal-encased voids, causing them to dissipate, Belharouak said.

“In the process we’ve developed, the battery can be manufactured as normal and then a pulse can be applied to rejuvenate and refresh the interface if the battery becomes fatigued,” he explained in a press statement.

Researchers published a paper on their research in the journal ACS Letters.

Even after the successful application of the pulse, the team repeated experiments and advanced characterization of the materials to verify its viability. These revealed that the method does not degrade battery components, which means it can be scaled so the solid-state devices can be removed and refreshed back to almost the original capacity.

The team plans to continue the work to include experiments with more advanced electrolyte materials, researchers said.

ORNL researchers also are working to scale up the method to a working-scale solid-state battery system to prove the technology can transition from the lab to the real world, Belharouak added.

“Sometimes the things you see developed at the laboratory scale don’t end up working well together when you put them into cell architecture,” he said, and the team wants to avoid this scenario.