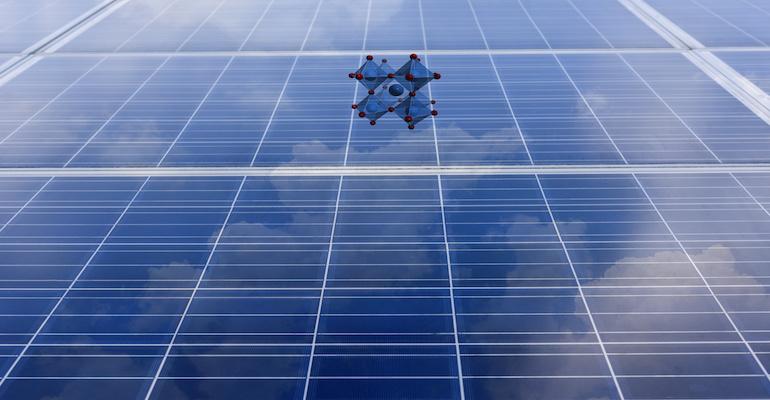 Adding salt crystals used in common fertilizers can prevent the harmful material from polluting the environment and causing a health hazard.

Perovskite-based solar cells long have been viewed as a promising alternative to silicon-based cells because of their higher light-conversion efficiency and lower cost of production. However, one drawback to the perovskite materials used in these devices is that they contain the toxic chemical lead, which can have a severe negative impact on the environment and people’s health if it leaks and escapes from the cell.

To help solve this problem to make these types of solar cells a more viable alternative to current mainstream technology, researchers at Ecole Polytechnique Federale de Lausanne (EPFL)—a leading technology university in Switzerland—have developed a solution using a common material found in fertilizer that can prevent lead from seeping into the soil in case a perovskite solar cell fails.

Related: Solar has Arrived! These Are the 12 Biggest Solar Power Plants in the World

The team, led by Professor László Forró at EPFL’s School of Basic Sciences, has added a transparent phosphate salt to the perovskite that doesn’t interfere with its ability to convert sunlight into electricity, he said. What the salt does, however, is interact with the lead in the material so it won’t escape into the soil in which the cell is positioned, he said.

While perovskite cells have remarkably high conversion rates—25 percent, which is “now approaching the performance of the best silicon solar cells”--the presence of lead in the technology is extremely worrying, which is why researchers aimed to solve the problem, Forró said. Perovskites typically consist of lead, tin, iodine, bromine, and other elements.

Related: How can Better Material Interfaces Boost the Flow of Electrons in Solar Panels?

“The solar energy-to-electricity conversion of perovskite solar cells is unbelievably high…but their central element is lead, which is a poison; if the solar panel fails, it can wash out into the soil, get into the food chain, and cause serious diseases,” he said in a press statement.

The Problem with Perovskites

The reason that lead can potentially seep into the environment from a perovskite solar cell is that in most of these cells, the lead can dissolve in water, researchers said.

While this water and other solvent solubility is an advantage to the production of perovskite-based cells—making them simpler to produce and less expensive—it also can become a hazard if the panel breaks or gets wet, the latter a common scenario that can be caused by rain, they said.

Researchers have surmised, then, that to solve the problem, they needed to find a way to capture and even recycle the lead from the cell before it could get to the soil. If they could do this, they would create a path to further implementation of these types of cells, as this potential environmental hazard is a key obstacle for the approval of their use by regulatory authorities.

So far, however, none of this research has been able to solve the problem without compromising cell performance, Forró explained—until now. The solution his team devised uses inexpensive and transparent phosphate salt crystals that are commonly used in soil fertilizers.

Several years ago, the team discovered that these salt crystals can be incorporated into various parts of the sandwich-like lead halide perovskite devices—such as photodetectors, LEDs, or solar cells—to immediately react with the lead in the cell to produce a water-insoluble compound that cannot leach out to the soil, researchers explained. The crystals also enable the lead to be recycled.

“These salts instantaneously react with lead ions in the presence of water, and precipitate them into extremely non-water-soluble lead phosphates,” Endre Horváth, one of the researchers on the project, said in a press statement.

The team published a paper on its work in the journal ACS Applied Materials and Interfaces.

Researchers are encouraging their colleagues to apply the research to the development of prototypes of functional photodetectors as well as devices such as solar cells and light-emitting diodes for use in perovskite-based solar cells. They believe their work will be a pathway to broader use of these devices, Forró said.

“This is an extremely important study -- I would say, a central one -- for large-scale commercialization of perovskite-based solar cells,” he said.