Did You Need Proof? The US Government Shows That EVs Are Cheaper to Run 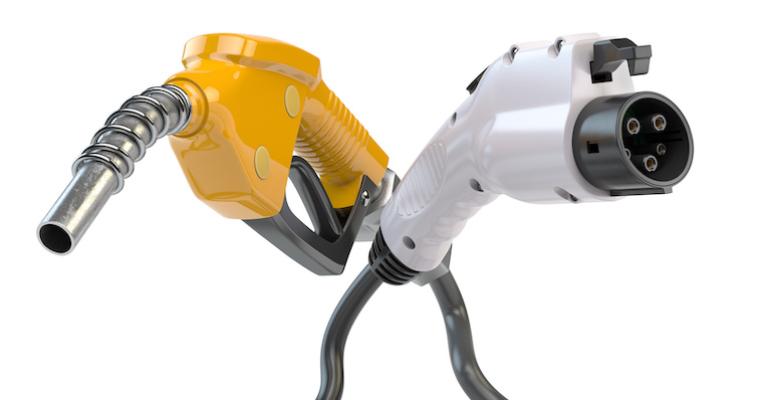 Electric vehicle (EV) advocates have always pointed to lower operating and maintenance costs as a reason to go electric. It makes sense—a gasoline-powered vehicle has over 10,000 parts in its engine and driveline, while an EV has fewer than 10. Fewer parts mean fewer things to go wrong. The Office of Energy Efficiency & Renewable Energy (EERE,  part of the US Department of Energy) has published results of a study of EVs versus gasoline-powered vehicles and it proves what EV fans have been saying.

Related: General Motors Increases its EV and Autonomy Commitment to $35 Billion Through 2025

In its report, the EERE says, “The estimated scheduled maintenance cost for a light-duty battery-electric vehicle (BEV) totals 6.1 cents per mile, while a conventional internal combustion engine vehicle (ICEV) totals 10.1 cents per mile.” In addition, the EERE pointed o areas where an EV wins out over a traditional gasoline-powered vehicle. “A BEV lacks an ICEV’s engine oil, timing belt, oxygen sensor, spark plugs and more, and the maintenance costs associated with them.” The study also looked at hybrids: “The hybrid-electric vehicle (HEV) and the plug-in hybrid-electric vehicle (PHEV) share costs with both the ICEV and the EV but save money on brake maintenance.” 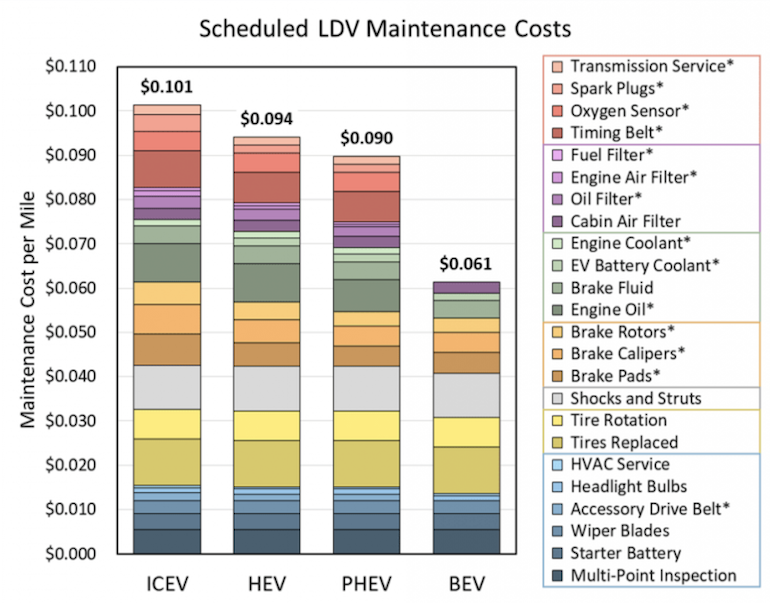 How significant is the difference between costs to run an EV and a gasoline vehicle? Motor Trend did an analysis based on the EERE numbers and the size of the US government's vehicle fleet. According to the U.S. General Services Administration, in 2019 government-owned light-duty vehicles (sedan, SUV, or passenger van) traveled 1,958,202,121 miles. Motor Trend calculated that if the US government switched from gasoline vehicles (at 10.1 cents per mile) to EVs (at 6.1 cents per mile), the overall savings, just in maintenance costs would be $78 million.

The EERE study doesn’t include the lower cost of electrical energy versus that coming from gasoline. Clean Technica did an additional calculation to look at how much money the US government would save in fuel costs.  They assumed the average fuel economy for the US government gasoline fleet is 20 miles per gallon and that it would take about 100 million gallons of gasoline to drive the nearly 2 billion miles covered in 2019.  With gas at an average of $3.00 a gallon, the US government is spending $300 million per year on fossil fuels to power its light-duty vehicles.

Clean Technica assumed that the cost of electricity is roughly half the cost of gasoline, which means that a fleet of EVs would save about $150 million in fuel costs every year. Adding in the $78 million in reduced maintenance costs of the EVs, and the annual savings realized by switching the entire US government fleet to EVs would be $228 million per year.

It’s important to note that these numbers don’t include the US Post Office, which operates its own fleet of more than 212,000 vehicles that cover more than 1.28 billion miles per year. It also doesn’t include the fleet of tactical vehicles (most of which are diesel-powered) operated by the US military.

The US Government is On-Board

On January 25, 2021, President Biden made a vow to replace the US Government’s entire fleet of light-duty vehicles (cars, trucks, and SUVs) with EVs assembled in the United States. With a fleet of more than 224,000 light-duty passenger vehicles (again excluding the Post Office), in July 2020 just 3,215 vehicles operated by the US Government were electrics, according to the General Services Administration (GSA). “The federal government also owns an enormous fleet of vehicles, which we’re going to replace with clean electric vehicles made right here in America made by American workers,” Biden said in his January 25thremarks.

Replacing the US Government’s fleet of gasoline-powered light-duty vehicles with a fleet of US-made EVs not only saves millions in operating and fuel costs, but it will also help to jump-start the US market for EVs, which is still hovering at less than 2 percent of new vehicle sales. Thanks to the EERE report there are now hard numbers that are hard for EV critics to argue against.