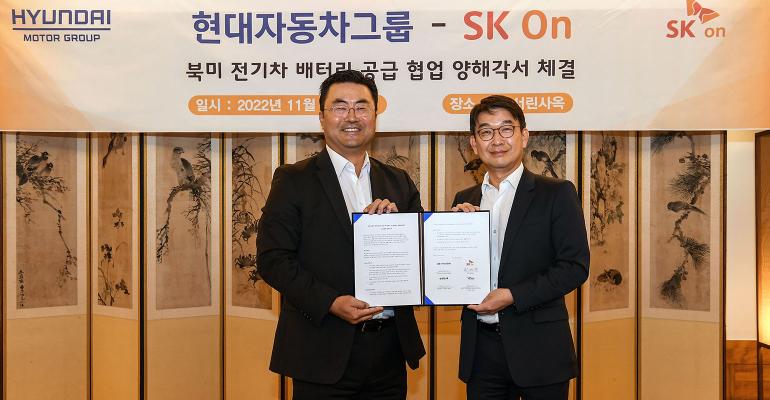 Hyundai signed a memorandum of understanding (MOU) with EV battery maker SK On Co., Ltd. on November 29 to secure a supply of EV batteries in North America, the companies announced. Under the MOU, both parties will cooperate to provide SK On batteries to Hyundai’s plants in the US after 2025 for EV production.

Just as interesting is what they didn’t announce, or at least not yet: According to the Korea Economic Daily, Hundai and SK On will build a new battery plant in the US, with an estimated investment of $1.9 billion, in order to take advantage of recent legislation that rewards US-based energy storage manufacturing. According to the report, Hyundai and SK On build the plant in Georgia as a 50-50 joint-venture factory with an annual capacity of 20 GW hours. The plan is for it to be operational by the first quarter of 2026.

Meanwhile, Reuters reports that Hyundai and another battery-maker, LG Energy Solution, are considering building two joint-venture battery plants, also in Georgia. The two plants reportedly would each have an annual capacity of about 35 GW hours. As with the Hyundai-SK On collaboration, these facilities would help the companies meet the new US EV subsidy rules, put in place by the Inflation Reduction Act this summer. Under the new rules, from 2023 at least 40% of the monetary value of critical battery minerals need to be from either the US or one of its free-trade partners in order to qualify for US tax credits. That percentage will rise to 80% in 2027.

These reports cap another extremely active period of announcements regarding new US-based production facilities tied to batteries and EV infrastructure.

And in November, six other companies—Canoo, Panasonic Energy, Nanotech Energy, LG Chem, SK Signet, and Livent—announced new or expanded US facilities. For the details of these projects, click below.