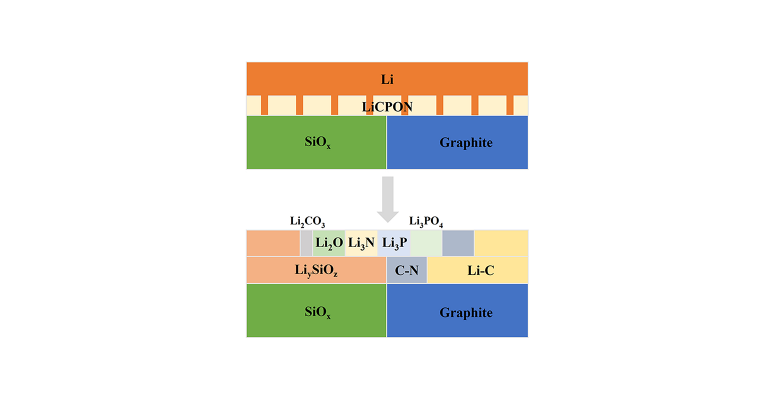 Schematic illustration of the LiCPON solid electrolyte and silicon-monoxide-carbon composite anode and consequent structure following battery cycling.
The hunt for the next generation of materials for anodes in lithium-ion batteries is still ongoing. A novel preparation technique for a silicon-monoxide-carbon composite material looks set to finally deliver the efficiency gains desired with none of the unwanted side reactions.

A paper describing the process appeared in the journal Nano Research. Since the late 1990s, most manufacturers of lithium-ion batteries have used graphite as the battery’s anode (the negative terminal into which the electrical current enters the battery), replacing coking coal. The switch from coke to graphite, a form of carbon, was made due to its long-term stability over many cycles of recharging and discharging.

But to improve lithium-ion battery performance still further (and in so doing making the transition away from fossil fuels cheaper and more feasible), battery makers will need even better anodes.

One of the widely touted anode material replacements for graphite are silicon-based compounds due to their high specific capacity (rate of discharge) and abundance in the earth’s crust. Silicon monoxide has shown great promise for the next generation of high-power lithium-ion batteries.

Despite this promise, silicon monoxide on its own also comes with a set of drawbacks, not least its inherent low conductivity and massive change in size (volume) over the course of cycles of recharging and discharging. These variations in volume of up to 300% results in a destruction and shedding of the anode materials, radically reducing performance.

“However, if silicon monoxide is combined in a composite material with carbon—a sort of mash-up between the existing graphite anode material and next-generation silicon-based anode, we could be on to a winner,” stated Zhengwen Fu, a co-author of the study and an electrochemist with the Shanghai Key Laboratory of Molecular Catalysis and Innovative Materials at Fudan University. “The composite offers the best of both worlds. But even here, there are many obstacles to be overcome.”

The carbon offers the benefit of high electrical conductivity and its aforementioned structural stability, and also experiences a much smaller volume expansion during cycling. Its flexibility and lubricating ability also work to inhibit the volume expansion of the silicon. Overall, the composite anode offers good capacity and high cycling performance.

Unfortunately solving one set of problems has only produced another: silicon-monoxide-carbon composite anodes suffer from relatively poor coulombic efficiency. Coulombic efficiency, sometimes called current efficiency, refers to the ratio of the total electric charge put into a battery compared to the total charge extracted from it. There will always be less taken out than put in, but the goal is to limit such inevitable losses to a minimum. Coulombic efficiency is of particular importance to improving the performance and reducing the cost of the colossal amount of batteries we will need to electrify vehicles and for energy storage systems to back up variable sources of renewable energy such as wind and solar.

During the lithium-ion battery’s very first cycle using a silicon-monoxide-carbon composite anode, some of the lithium reacts irreversibly with the composite, producing ‘degradation products’ that form a layer between the surface of the anode and the electrolyte called the solid electrolyte interphase (SEI). This parasitic ‘lithiation’ process in turn results in loss of active lithium as well as of coulombic efficiency.

To overcome these challenges, the researchers developed a novel technique for ‘pre-lithiation’, in which they store extra lithium in the battery in advance to compensate for the lithium consumed by the parasitic reactions during the cycling of the battery. Other researchers had developed their own pre-lithiation techniques, typically involving pure metal lithium, a modified metal lithium or a compound containing lithium. All of these approaches have their own limitations. For example, the lithium containing compounds tend to release a gas following lithiation during cycling, which reduces the performance of the anode and the energy density of the battery as a whole.

The new pre-lithiation technique, which the researchers call ‘solid-state corrosion of lithium’, does away with such problems by replacing the liquid electrolyte (the lithium-based medium that allows transport of ions between the anode and its positive counterpart, the cathode, of a battery) with a solid electrolyte composed of carbon-incorporated lithium phosphorus oxynitride, or LiCPON. In this way not only are the various unwanted side reactions associated with metal lithium avoided, but a better interface is produced between anode and electrolyte.

The researchers were able to investigate whether their solid-state corrosion pre-lithiation process was performing as predicted via optical imaging, electron microscopy and x-ray diffraction—three different methods of viewing the electrochemical reactions in real time. The technique gave a boost to the anode of almost 83% over a pre-lithiation electrode using a liquid electrolyte.

Having proven their concept on ‘coin cells’—small-scale batteries intended for laboratory battery research and development; the researchers now want to demonstrate the process with industrial-grade batteries.