Will Tesla's Sustainability and Environmental Focus Make an Impact? 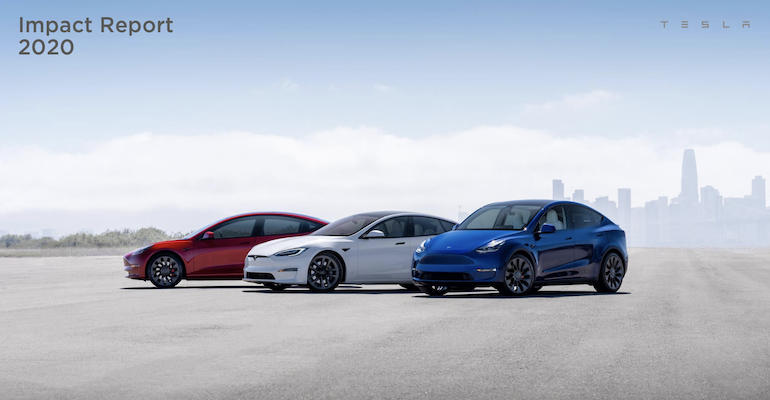 Tesla’s Impact Report for 2020 shows how the company is moving the electrification needle forward.

“The very purpose of Tesla’s existence is to accelerate the world’s transition to sustainable energy.” That’s the first line of Tesla’s 2020 Impact Report. The company says the objective of its Environmental, Social and Governance (ESG) Impact Report is “to disclose the impact a company has on those three areas, as well as to present, to the extent possible, data and other information qualifying and quantifying that impact.”

Related: Battery Supply Insights from one of the Biggest National Labs in the US

Key Takeaways from the Tesla Report:

This is what Tesla says about its mission in its report:

“We are designing and manufacturing a complete energy and transportation ecosystem. We not only develop the technology behind this ecosystem, but we also focus heavily on the affordability of our products that comprise it. We seek to achieve this through our R&D and software development efforts as well as through our continuous drive to develop advanced manufacturing capabilities. This is not only the right thing to do, but it also makes economic sense.”

While not everyone loves Tesla, it’s impossible to ignore the influence the company has had and continues to have on the electrification of transportation, in the US and worldwide. By 2030 aims to sell 20 million electric vehicles per year (compared to a half-million in 2020) as well as to deploy 1,500 gigawatt-hours (GWh) of energy storage per year (compared to 3 GWh in 2020).

Sure, other car companies are working on EVs, but not with the single-minded dedication of Tesla. If the company can even come close to delivering 20 million EVs per year the total fleet of tens of millions of vehicles built by Tesla could save tens of millions of tons of CO2 from being emitted every year.

9 Breathtaking Electric Sports Cars That Are at the Peak of EV Performance
Aug 03, 2021

Are Hybrid Vehicles Really as Attractive as They Might Seem?
Aug 06, 2021

No Longer Exclusive? Tesla Will Soon Open the Supercharger Network To Other EVs
Jul 28, 2021