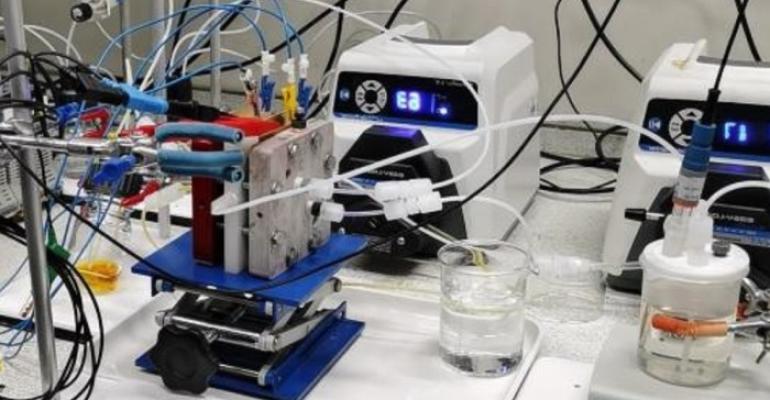 Researchers have taken a new approach to developing a battery for long-term energy storage from renewable sources with a dual-membrane device that uses lower-cost material than comparative and previously designed devices.

A team of engineers at Imperial College London developed a polysulfide-air redox flow battery (PSA RFB) that aims to solve the problem of scaling up when it comes to energy-storage devices designed to support the storage of energy from renewable sources like solar.

Storing this type of energy has particular needs due to the variable nature of harvesting it and then reusing it at a later date when the source is not available—i.e., when the sun isn’t shining.

Scientists have eyed redox flow batteries for this purpose, which store energy in two liquid electrolytes that flow through the cells during charge and discharge cycles. In these devices, the amount of energy stored is determined by the volume of the electrolyte; theoretically, that makes it easy to scale the device up.

However, typically the electrolyte material used in redox flow batteries is vanadium, which not only is expensive, but also is sourced from either China or Russia, two countries with which the West has difficult political and trade relationships—particularly regarding Russia’s current war with Ukraine.

To solve this problem, researchers have been seeking both lower-cost and easier-to-source materials to use as the electrolyte in redox flow batteries. The approach of the Imperial team--led by Professors Nigel Brandon and Anthony Kucernak—is to use a liquid as one electrolyte and a gas as the other. The materials in this case are polysulfide, or sulphur dissolved in an alkaline solution, and air.

While this solves the vanadium problem, it does introduce a performance hiccup, as the performance of PSA RFBs has so far been limited, researchers said. This is because no membrane used to date in these devices has enabled the necessary chemical reactions to take place while still preventing polysulfide from crossing over into the other part of the cell, they said.

When this happens, you lose material from one side, which reduces the reaction that occurs there and hinders the activity of the catalyst on the other side, researchers noted. This is what drives down the battery’s performance.

To solve this issue, researchers took a dual-membrane approach, which served to separate the polysulfide and the air, putting a solution of sodium hydroxide between them.

Not only did this remedy the issue of performance loss, but all the materials used in the design are relatively inexpensive and easy to source, solving the previous issue that vanadium creates as well, researchers said.

The device also performed better in tests against the best results obtained to date from a polysulfide-air redox flow battery, they said. The new design was able to provide significantly more power, up to 5.8 milliwatts per centimeter squared, researchers reported in a paper on their work published in the journal Nature Communications.

In terms of cost-effectiveness, however, the battery demonstrated mixed results, researchers said. The energy cost of the device—i.e., the price of storage materials in relation to the amount of energy it can store--was --$2.5 kilowatt per hour, which is reasonable versus other redox flow batteries developed so far.

However, the power cost--or the rate of charge and discharge achieved in relation to the price of the membranes and catalysts in the cell—was calculated at about $1,600 per kilowatt. This cost is higher than what’s feasible for large-scale energy storage and thus far from ideal. However, the team believes it can make improvements to lower this cost, Brandon said.

"To make this cost-effective for large-scale storage, a relatively modest improvement in performance would be required, which could be achieved by changes to the catalyst to increase its activity or by further improvements in the membranes used,” he said in a press statement.

Researchers already have spun off a company from their project, RFC Power Ltd., to commercialize the design as part of its aim to develop long-duration storage of renewable energy.