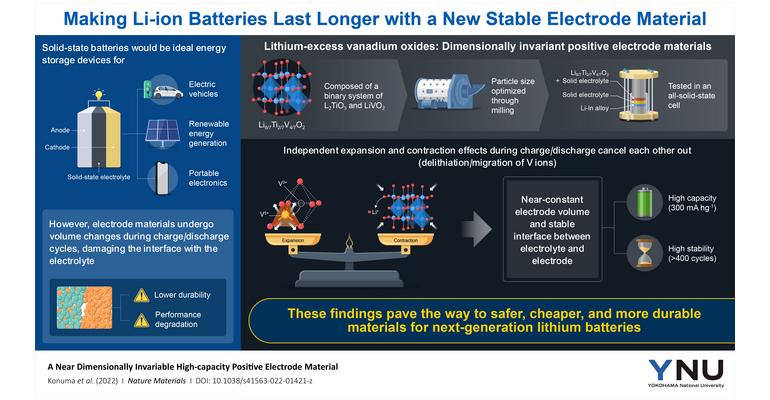 Electric cars are widely regarded as our best bet to replace conventional cars with a more environment-friendly alternative. However, electric cars and other electric vehicles will most likely run on lithium-ion batteries, which currently don’t deliver the necessary performance and durability at a reasonable price.

Solid-state batteries (SSBs), however, have gained much traction over the past few years among researchers looking for alternatives. While conventional lithium-ion batteries contain a liquid electrolyte in which lithium ions flow during the charge/discharge process, SSBs are made entirely from solid materials. Besides a massive improvement in operational safety – since these batteries won’t spill toxic liquids when punctured – SSBs can be charged much more quickly.

But up until now, there was an unsolved problem in SSBs that limited their durability. When lithium ions are inserted into or extracted from the electrodes of the battery, the crystalline structure of the material changes, making the electrode expand or shrink. These repeated changes in volume damage the interface between the electrodes and the solid electrolyte and cause irreversible alterations in the crystal chemistry of the electrodes.

Against this backdrop, a team of scientists led by Professor Naoaki Yabuuchi of Yokohama National University, Japan, investigated a new type of positive electrode material with unprecedented stability in SSBs. Their work, which was published in Nature Materials, was co-authored by Associate Professor Neeraj Sharma from UNSW Sydney, Australia, and Dr. Takuhiro Miyuki from LIBTEC, Japan.

The material the research team focused on was Li8/7Ti2/7V4/7O2, a binary system composed of optimized portions of lithium titanate (Li2TiO3) and lithium vanadium dioxide (LiVO2). When ball-milled down to an appropriate particle size in the order of nanometers, this material offers high capacity thanks to its large quantity of lithium ions that can be reversibly inserted and extracted during the charge/discharge process.

Unlike other positive electrode materials, Li8/7Ti2/7V4/7O2 has a special property that makes it stand out: it has nearly the same volume when fully charged and fully discharged. The researchers analyzed the origin of this property and concluded that it is the result of a fine balance between two independent phenomena that occur when lithium ions are inserted or extracted from the crystal.

On one hand, the removal of lithium ions, or ‘delithiation,’ causes an increase in free volume in the crystal, which makes it shrink. On the other hand, some vanadium ions migrate from their original position to the spaces left behind by the lithium ions, acquiring a higher oxidation state in the process. This causes a repulsive interaction with oxygen, which in turn produces an expansion of the crystal lattice.

“When shrinkage and expansion are well balanced, dimensional stability is retained while the battery is charged or discharged, i.e. during cycling,” Prof. Yabuuchi says.

“We anticipate that a truly dimensionally invariable material – one that retains its volume upon electrochemical cycling – could be developed by further optimizing the chemical composition of the electrolyte.”

The research team tested this new positive electrode material in an all-solid-state cell by combining it with an appropriate solid electrolyte and a negative electrode. This cell exhibited a remarkable capacity of 300 mA.h/g with no degradation over 400 charge/discharge cycles.

“The absence of capacity fading over 400 cycles clearly indicates the superior performance of this material compared with those reported for conventional all-solid-state cells with layered materials. This finding could drastically reduce battery costs. The development of practical high-performance solid-state batteries can also lead to the development of advanced electric vehicles,” Prof. Sharma explains.

By further refining dimensionally invariant electrode materials, it may soon be possible to manufacture batteries that are good enough for electric vehicles in terms of price, safety, capacity, charging speed, and lifespan.

“The development of long-life and high-performance solid-state batteries would solve some of the problems of electric vehicles,” Prof. Yabuuchi says.

“In the future, for instance, it may be possible to fully charge an electric vehicle in as little as five minutes.”

The researchers are keen to see more progress in this field that would accelerate the adoption of electric cars and help build a greener future for the planet.