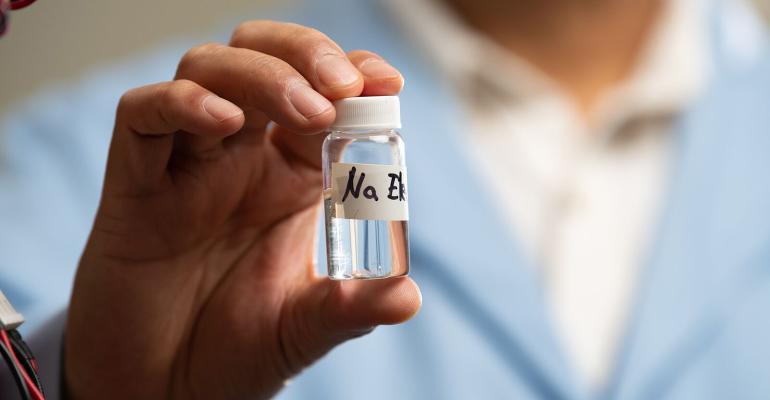 Researchers from the Department of Energy (DoE) have made a significant breakthrough that they believe just may be the solution to making sodium-ion batteries a viable alternative to lithium-ion batteries.

Researchers from the DoE’s Pacific Northwest National Laboratory (PNNL) have tweaked the ingredients of the liquid core of sodium-based storage devices to greatly bolster their longevity and resolve performance issues that have so far plagued them, they said.

“Here, we have shown in principle that sodium-ion batteries have the potential to be a long lasting and environmentally friendly battery technology,” Jiguang Zhang, one of the lead researchers on the project, said of the research, which was published in a paper in the journal Nature Energy.

Scientists long have viewed sodium-ion batteries as one of the most desirable options to replace lithium-ion batteries in the future for several reasons. Given how abundant sodium is, it’s far less expensive, easier, and more ethical to source than lithium—an expensive, limited resource extracted in exploitative ways in underdeveloped regions of the world.

Sodium-ion batteries also potentially can retain a high capacity of energy at any given weight and volume, which makes them an attractive alternative to lithium-ion batteries, which become heavier as they are more energy-dense, researchers said.

Specifically, the PNNL team worked with the battery’s liquid electrolyte, which forms by dissolving salts in solvents. The electrolyte is the part of the battery in which charged ions flow between the positive and negative electrodes. This over time in any battery gets sluggish, which limits how many times the device can be recharged and still continue to hold a charge and thus function optimally.

A key drawback in sodium-ion batteries is that this charge degradation happens faster than in lithium-ion batteries, which has hindered its viability as a commercial alternative to lithium devices.

Led by scientists Yan Jin and Phung Le, the PNNL team approached that problem by creating a new recipe for the electrolyte, switching out the liquid solution and the type of salt flowing through the battery to solve a key problem that typically occurs with this part of the device.

The current electrolyte for sodium-ion batteries tends to dissolve the protective film on the anode, or the negative electrode in the device. This film is a critical part of the battery because it allows sodium ions to pass through to the anode while preserving battery life.

To solve this problem, researchers stabilized the film protecting the anode as well as added an ultra-thin protective layer on the cathode, or positive electrode, they said. Their changes to the device resulted in creating an overall more stable battery, one that in lab tests could maintain 90 percent of its cell capacity after 300 cycles at 4.2 V, researchers reported.

While this performance is higher than most sodium-ion batteries previously developed, it’s still not on par with lithium-ion batteries. But researchers said it’s some of the most promising work to date to advance the design of sodium-based devices.

The battery developed by the PNNL team also showed improvements over current lithium-ion designs in its ability to operate at high voltages, an area in which the latter devices historically have struggled. Indeed, lithium-ion designs can short circuit and even catch fire when they become too energy dense, which is one of the key reasons scientists are looking to replace them.

The novel sodium-based device, on the other hand, uses a naturally fire-extinguishing solution that is not influenced by temperature changes and can operate at high voltages, researchers said. The ultra-thin layer that forms on the anode is key to this, providing an overall device stability , they said.

Researchers also measured the production of gas vapor at the cathode, and found that it was minimal, they said. This can provide scientists with insights for the development of stable electrolytes for sodium-ion batteries for high-temperature operation.

The PNNL team aims to continue its work by refining the current battery design as well as experimenting with others to reduce and potentially eliminate the use of other problematic materials typically used in batteries. One of these is cobalt, which is toxic and expensive if not recovered or recycled, they said.