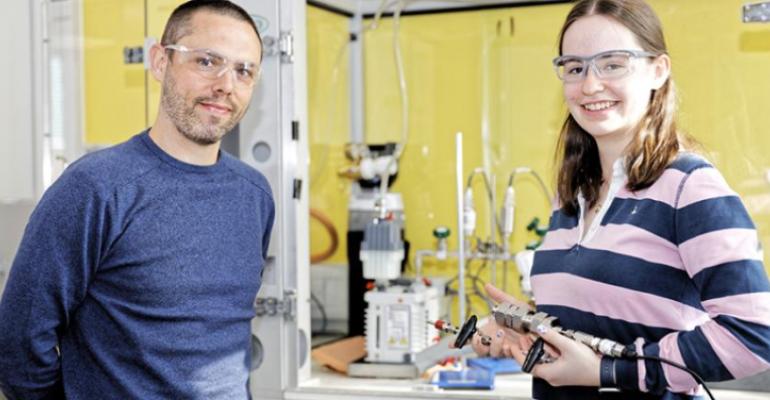 Professor Israel Temprano and Grace Mapstone, a PhD student in chemistry from University of Cambridge, who worked on a project to create a supercapacitor out of natural materials that can capture carbon dioxide. The two were co-authors on a paper on the work published in the journal Nanoscale.
Researchers hope the low-cost, environmentally friendly device can eventually scale up to participate in larger greenhouse-gas collection efforts.

Researchers have developed a low-cost battery-like device using some natural materials that can also serve an environmentally friendly purpose by collecting carbon-dioxide present in the air, they said.

A team at the University of Cambridge built the supercapacitor, which is about the size of a penny and can selectively capture carbon-dioxide gas as it charges, researchers said. The gas can then be released upon discharge in a controlled way or collected to be reused or disposed of safely.

Researchers used natural materials, including coconut shells and seawater, as part of the design of the device, further adding to its sustainability, they said.

“We want to use materials that are inert, that don’t harm environments, and that we need to dispose of less frequently,” said Grace Mapstone, a PhD student in chemistry and one of the researchers on the project, in a press statement. “For example, the carbon-dioxide dissolves into a water-based electrolyte which is basically seawater.”

Supercapacitors are similar to batteries in that they store and discharge energy, though typically their capacity is less than typical batteries.

However, there are some advantages to these devices based on their reliance on the movement of electrons rather than a chemical reaction to function—a longer lifespan and a slower pace of degradation.

“For something like carbon capture we would prioritize durability,” she said in a press statement. “The best part is that the materials used to make supercapacitors are cheap and abundant. The electrodes are made of carbon, which comes from waste coconut shells.”

How the System Works

Like a battery, the supercapacitor is comprised of two electrodes—one of positive charge and one of negative charge. To extend the charging time from previous incarnations of the device—which also would allow it to capture more carbon—researchers tried alternating from a negative to a positive voltage, an endeavor led by researcher Trevor Binford while completing his master’s degree at Cambridge.

“We found that that by slowly alternating the current between the plates we can capture double the amount of carbon-dioxide than before,” said Professor Alexander Forse from Cambridge’s Yusuf Hamied Department of Chemistry, who led the overall project.

The supercapacitor, however, can’t absorb carbon-dioxide spontaneously; it only does so when charging, researchers said. The process works like this: When the electrodes become charged, the negative plate draws in the carbon-dioxide gas, while ignoring other emissions, such as oxygen, nitrogen, and water. In this way, the supercapacitor both captures carbon and stores energy, they said.

Researchers published a paper on their research in the journal Nanoscale.

The team hopes the device can be a prototype for larger-scale devices that can capture some of the roughly 35 billion tons of carbon-dioxide released into the atmosphere per year.

Indeed, it’s a good start, as the charging-discharging process of the supercapacitor potentially uses less energy than the amine heating process used in industry now to collect the greenhouse gas, Forse said.

The next area of investigation will be the precise mechanisms of carbon capture and how to improve them, he said. “Then it will be a question of scaling up,” Forse said.

Sodium-Ion Battery to Promote Low-Cost Alternative for EVs
May 09, 2022