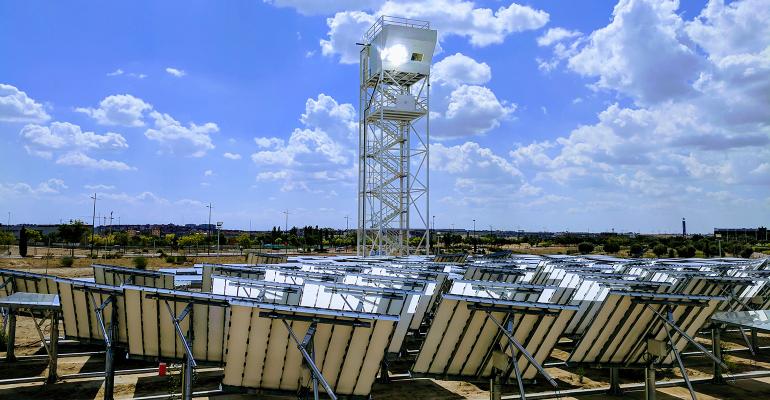 Researchers have devised a way to produce aviation fuel in a carbon-neutral production system, a solution that could help the industry drastically reduce its carbon footprint.

A team from ETH Zurich designed a fuel production system in the form of an integrated tower that uses water, carbon dioxide (CO2), and sunlight to produce aviation fuel.

“We are the first to demonstrate the entire thermochemical process chain from water and CO2 to kerosene in a fully-integrated solar tower system,” Aldo Steinfeld, a professor from—ETH Zurich and the corresponding author of the paper, said in a press statement.

The tower already has been tested successfully in production, while previously scientists have used solar energy to produce aviation fuels only in a laboratory setting, he said.

The production viability of the tower could be an important first step in making a significant dent in the production of anthropogenic emissions by the aviation industry, which contribute to climate change, researchers said.

Currently, the sector is responsible for about five percent of these emissions due to its heavy reliance on kerosene, or jet fuel—a liquid hydrocarbon fuel typically derived from crude oil.

Though researchers have been seeking solutions to these problems through solar energy as well as other forms of electricity and fuel, there is currently no clean alternative to powering long-haul commercial flights, they said.

The solar tower could now be one such solution, Steinfeld said. That’s because the fuel produced from the production system is derived from water and CO2 instead of fossil fuels, Steinfeld said.

“The amount of CO2 emitted during kerosene combustion in a jet engine equals that consumed during its production in the solar plant,” he explained in a press statement. “That makes the fuel carbon-neutral, especially if we use CO2 captured directly from the air as an ingredient, hopefully in the not-too-distant future.”

Steinfeld and his team developed the system for the European Union’s SUN-to-LIQUID project. The system—which they tested in a nine-day production run--makes drop-in fuels, which are synthetic alternatives to fossil-derived fuels such as kerosene and diesel.

The team started scaling up the design and built a solar fuel-production plant at IMDEA Energy Institute in Spain beginning in 2017. The plant is comprised of 169 sun-tracking reflective panels that redirect and concentrate solar radiation into a solar reactor mounted on top of a tower.

The concentrated solar energy drives oxidation-reduction (redox) reaction cycles in the solar reactor, which contains a porous structure made of ceria, researchers said. The ceria—which rather than be consumed can be used over and over--converts water and carbon-dioxide injected into the reactor into syngas, or a custom mixture of hydrogen and carbon monoxide.

The syngas is sent into a gas-to-liquid converter, where it is finally processed into liquid hydrocarbon fuels that include kerosene and diesel, researchers said.

“This solar tower fuel plant was operated with a setup relevant to industrial implementation, setting a technological milestone towards the production of sustainable aviation fuels,” Steinfeld explained.

The Way Forward for Real-World Use

The solar-made kerosene is fully compatible with the existing aviation infrastructure for fuel storage, distribution, and eventual use in jet engines, Steinfeld said. It also be blended with fossil-derived kerosene as a hybrid fuel, he added.

Researchers published a paper on their work in the journal Joule in which they report on the results of the production run. During that time, the solar reactor’s energy efficiency—the portion of solar energy input that is converted into the energy content of the syngas produced—was around 4 percent.

The team plans to continue working to improve the design of the system to boost the efficiency to values higher than 15 percent, Steinfeld said. One of the ways they are exploring to achieve this is to optimize the ceria structure for absorbing solar radiation.

Researchers also are developing methods to recover the heat released during the redox cycles, he added.