Will Vehicle-To-Grid Technology Finally Shoot Up? 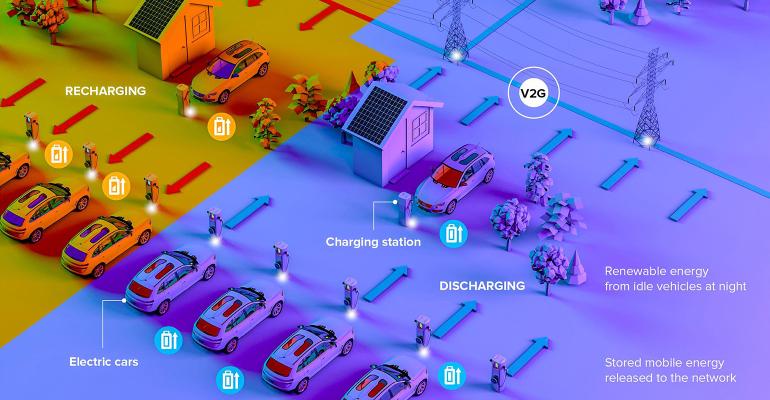 V2G system.
Vehicle-to-grid (V2G) bidirectional charging is a sustainable technology that could assist in the transition to renewable energy. Two new pilot programs aim to test its capabilities in North America.

Electricity no longer flows in only one direction, thanks to bidirectional chargers that can convert alternating current (AC) power to direct current (DC) power and vice versa. EVs charge their batteries with energy from the grid but thanks to bidirectional chargers, EVs can now take the energy stored in their batteries to push it back to the power grid to help balance transitory spikes in electricity demand. This energy storage solution is called Vehicle-to-Grid (V2G) and if it is scaled accordingly, it has the potential of successfully stabilizing the grid.

V2G allows EVs to charge during off-peak hours and give power back to the grid during peak hours when there is extra energy demand. An energy storage solution like this can maximize the use of renewable energy systems too. The excess of energy produced by renewables can be stored in the EV’s batteries and send back in the grid when energy backup is necessary e.g., wind power generation is not enough to cover the energy demand in a windless night.

The technology required for V2G already exists, the electronics to achieve power efficiency is in place, but V2G is still a proof-of-concept trying to overcome its own challenges:

Revel, NineDot Energy and Fermata Energy announced that the first Vehicle-to-Grid (V2G) program connected to NYC’s grid is now live at Revel’s Red Hook, Brooklyn warehouse. Revel, a Brooklyn-based electric mobility and infrastructure company, partnered with V2G and Vehicle-to-Everything (V2X) provider Fermata Energy and clean energy developer NineDot Energy to deploy a bidirectional charging system that can both charge electric vehicles (EVs) and discharge those EVs to send energy stored in their batteries back to Con Edison’s grid in NYC.

Based on the interconnection agreement with Con Edison, the chargers send energy stored in vehicle batteries back to the grid from 2:00 - 6:00 PM ET, during local energy demand peaks. The three bidirectional chargers can export approximately 45kW back to the grid. The V2G system currently operates with Nissan LEAF EVs; and it aims to incorporate more EV models as V2G technology becomes more available. 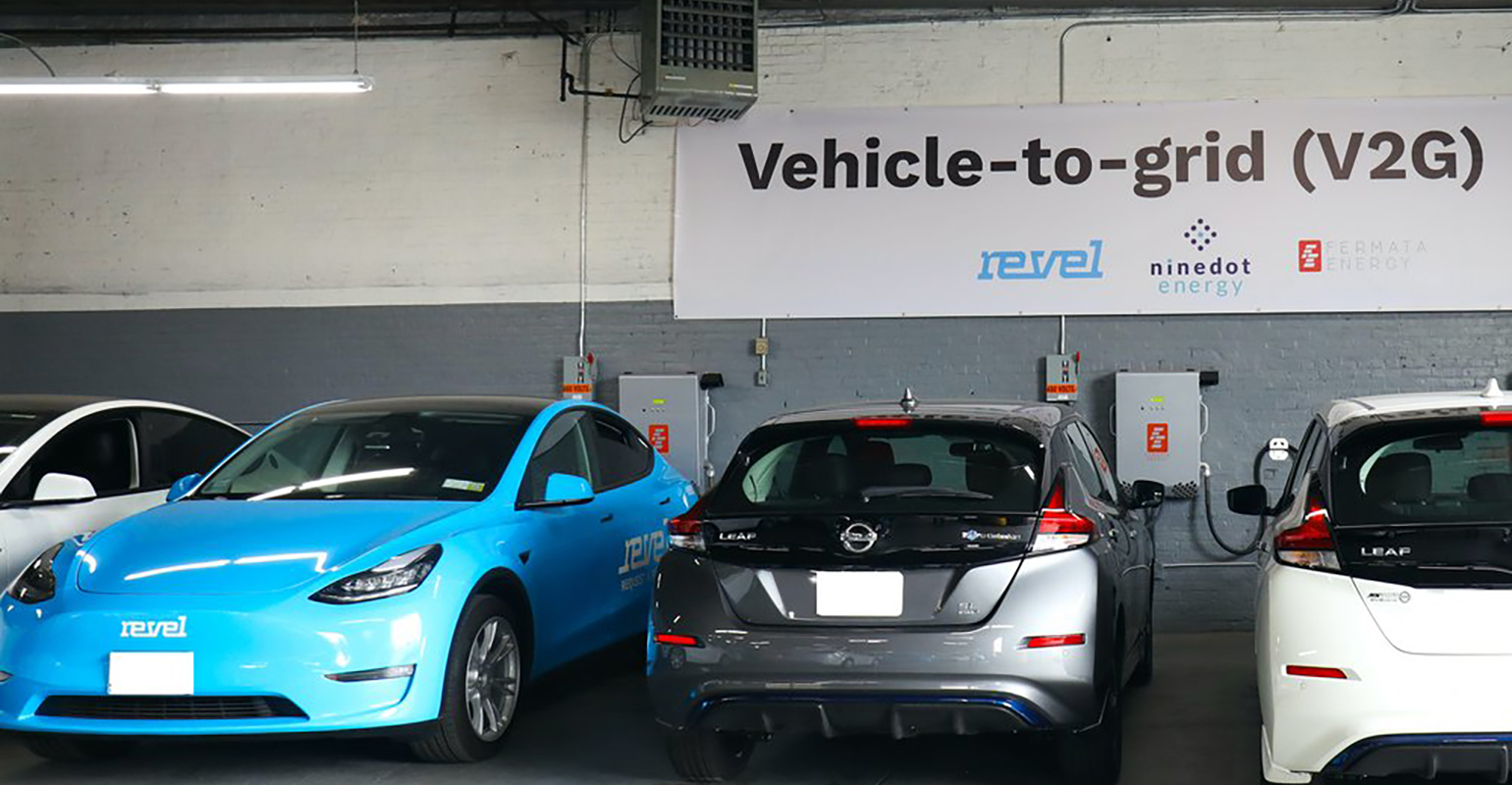 Duke Energy and Ford Motor Company are partnering on a V2G pilot program using F-150 Lightning electric truck’s batteries. The V2G pilot program is expected to launch in 2023 for customers in the Duke Energy Carolinas (DEC) service area. Pilot incentives will reduce vehicle lease payments for program participants who lease an eligible EV, including Ford F-150 Lightning trucks. In exchange, customers will allow their EVs to feed energy back to the grid – helping to balance it during peak demand.

The pilot program will enroll up to 100 customers. Duke Energy will be allowed to draw energy up to three times per month during higher peak winter and summer months, and one time per month during the remaining months of the year, for testing and research purposes and to support the energy grid during peak usage hours. As part of the pilot program, Duke Energy will analyze flows of energy between EV batteries and the power grid and work closely with Ford and other vehicle manufacturers to study the full functionality of bidirectional charging integration. 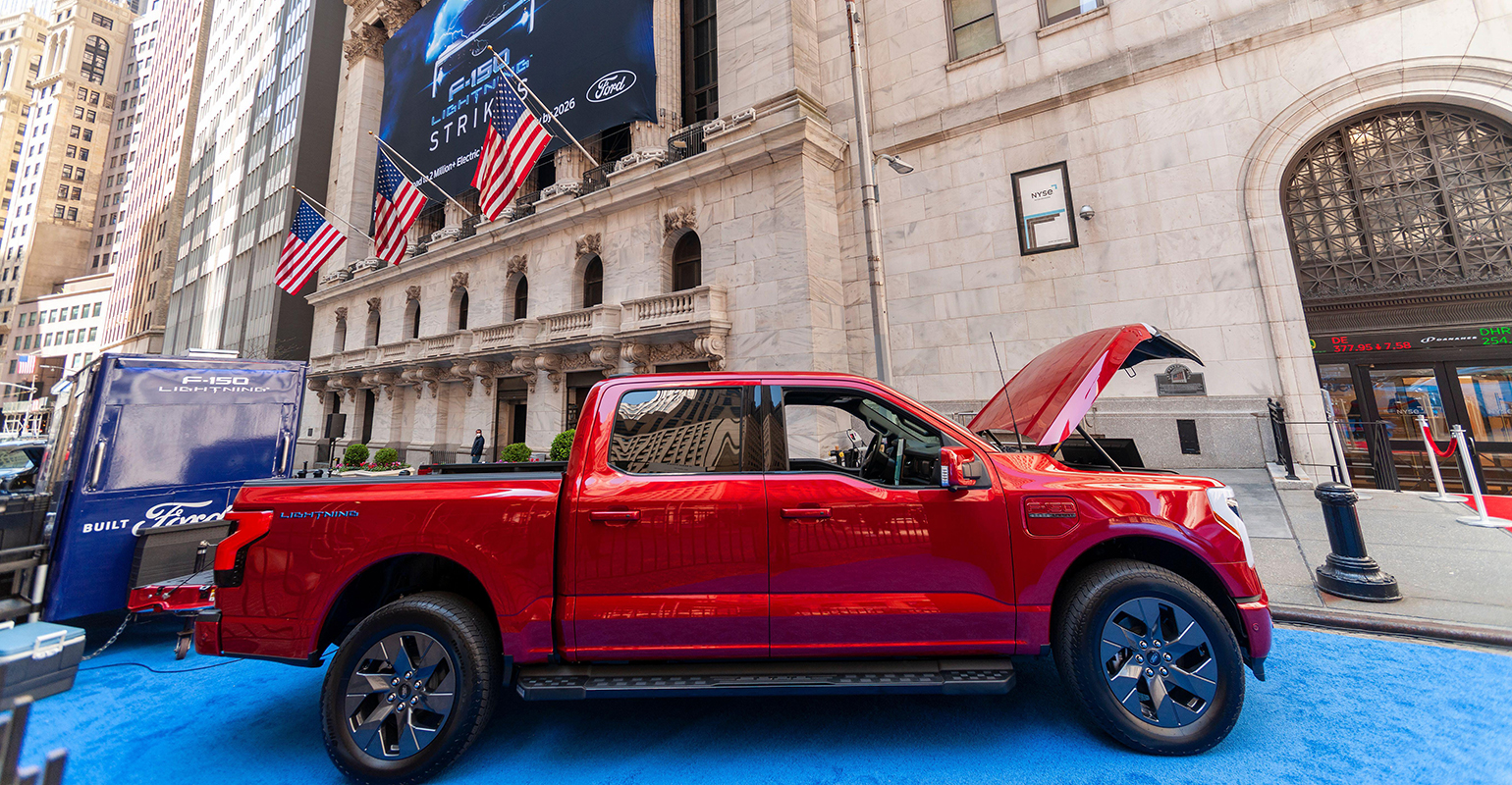 From Research to Rollout?

There are still challenges to overcome before a large-scale rollout is implemented but pilot programs like the ones mentioned above are the ideal testbed for future technologies. The U.S. electric vehicle charging infrastructure market size is expected to reach USD 49.14 billion by 2030, growing at a CAGR of 36.9% from 2022 to 2030. Favorable government initiatives, subsidies, and tax rebate programs to promote electrical vehicle (EV) adoption are driving the EV market growth and consequently the growth of the charging infrastructure through the development and adoption of innovative technologies such as V2G. There are concrete possibilities of V2G becoming a commercial reality for utilities, consumers, and regulators.