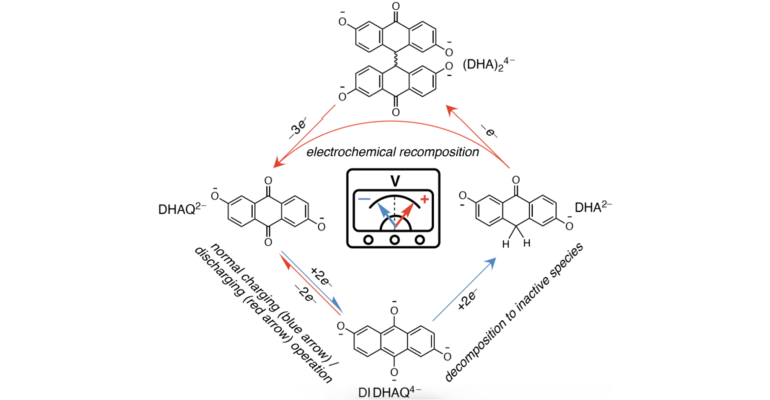 The cycle of decomposition and recomposition of molecules in an organic aqueous flow battery. During normal charge and discharge, the so-called “zombie molecule” oscillates between its DHAQ2- form (left) and its DHAQ4- form (bottom center). When it decomposes, it turns into DHA2- (right). A voltage pulse resets the decomposed molecules (right) back to their original form (left).
A new method to reverse the decomposition of key molecules may make organic aqueous flow batteries commercially viable.

While energy from renewable sources is becoming more widely used, researchers continue to seek the best way to store that energy so it can be accessed even when its source—such as solar or wind energy—is not available.

Organic aqueous flow batteries have emerged as a promising solution for this, but the instability of some of the materials present in the technology has hindered their commercial viability.

Now a collaboration between researchers at Harvard University and the University of Cambridge has found a way to solve some of the issues associated with organic aqueous flow batteries to extend their lifetime, taking “an enormous step to making these batteries competitive,” Michael Aziz, a professor of materials and energy technologies at Harvard’s John A. Paulson School of Engineering and Applied Sciences (SEAS), stated.

Aziz and colleague Roy Gordon, a Harvard professor of chemistry and materials sciences, have been working for a decade to develop organic aqueous flow batteries using molecules known as anthraquinones. These molecules store and release energy and are comprised of naturally abundant elements such as carbon, hydrogen, and oxygen.

Researchers already have had some success in previous work to extend the lifetime of one of these molecules found in the devices—named DHAQ but dubbed the “zombie quinone” in the lab.

They found that by exposing the molecule to air at precisely the right time during its charge-discharge cycle, it can extract oxygen and reverse the decomposition process, restoring the anthraquinone molecule to its original state. This process of appearing to return from the dead is what inspired the molecule’s nickname, according to the researchers.

While this work gave the Harvard team hope for their ultimate goal, they realized it’s not practical to expose a battery’s electrolyte to air because it means both sides of the battery can’t be fully charged at the same time, creating an imbalance.

To find a more practical approach, Aziz and Gordon worked together with chemists at the University of Cambridge to reach a better understanding of how the molecules decompose. From this collaboration was born the product of the current work—an electrical method of reversing the process of decomposition.

The researchers found the key to the success of their current work is a type of “shock therapy” applied during the battery discharge cycle, they said.

They discovered that if they performed what’s called “deep discharge”—or draining the positive and negative terminals of the battery so much that the voltage difference between the two becomes zero—and then flipped the polarity of the battery to make the positive side negative and vice versa, they could create a voltage pulse that resets the decomposing molecules back to their original form.

“Usually, in running other kinds of batteries, you want to avoid draining the battery completely because it tends to degrade its components,” Yan Jing, a postdoctoral fellow at Harvard who worked on the project, stated in a press release. “But we’ve found that this extreme discharge, up to actually reversing the polarity, can recompose these molecules—which was a surprise.”

The process is similar to how a pacemaker works—it periodically provides a beneficial shock to the system—one that in this case brings the decomposed molecules back to life, he explained.

Researchers published a paper on their work in the journal Nature Chemistry. In the paper, they demonstrate that their process can produce an organic aqueous flow battery that has a net lifetime 17 times longer than shown in previous research.

Further, subsequent research to refine the process demonstrated an even greater increase in lifetime—of up to 260 times longer, with a loss rate less than 10 percent per year, the researchers stated. According to Aziz, this latter statistic is especially promising for commercialization of the device.

“Getting to a single-digit percentage of loss per year is really enabling for widespread commercialization because it’s not a major financial burden to top off your tanks by a few percent each year,” Aziz stated.

Harvard’s Office of Technology Development has patented the key technology of the project as well as licensed it and other related patents to Quino Energy, a startup that’s pursuing commercial development of an organic aqueous flow battery based on the work of Aziz, Gordon and the team.