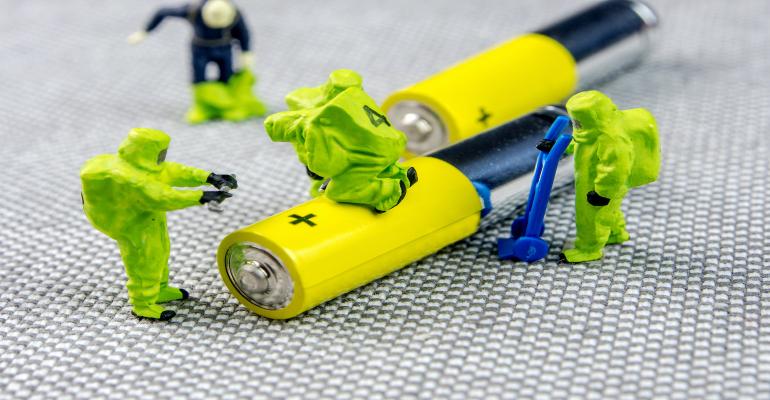 A University of Warwick team tests lithium-ion batteries far beyond their rated limits.

As the electrification of transportation systems continues forward, it is becoming clear that the lithium-ion batteries used in electric vehicles (EVs) must be treated carefully to avoid catastrophic failure. Overcharging, charging too quickly (with too much electrical current), and discharging at too great a rate or too near depletion can cause irreparable damage to lithium-ion cells. This damage can result in much lower cell lifetimes, or, in the worst cases can cause a breakdown of the cell which can create a thermal runaway condition or even a fire.

To prevent the abuse of cells during charging a discharging, a Battery Management System (BMS) is used to monitor the state of charge and temperature of individual cells in the pack. The BMS is generally capable of maintaining the performance level of the pack by balancing the charge level of the individual cells. Fast charging is known to accelerate aging such that cycle life becomes compromised, so there exists a trade-off between cycle life and performance that a BMS can facilitate.

But what are the limits of a cell when abused through very high charging and discharging currents? Finding out was the purpose of research performed by WMG, an academic department at the University of Warwick, in England. WMG investigated the impacts on battery cell aging from high current operation using commercial cells with two tests to establish the maximum current limits before cell failure and applying this maximum current until cell failure. The testing was performed to determine how far cycling parameters could progress beyond the manufacturer’s recommendations. The results of their research have been published in an open-access paper on MDPI.

The rate at which a battery is charged or discharged is designated by the term C. A rate of 1C means that a fully charged battery rated at 1Ah should provide 1A for one hour. The same battery discharging at 0.5C should provide 500mA for two hours, and at 2C it delivers 2A for 30 minutes. Discharging a battery during acceleration of an EV can reach rates of up to 8-10C, while fast DC charging can be done at rates of around 4C.

As described in the research paper, three commercially available LFP cells were tested in the cell failure test and cell surface temperatures were logged for the entire process. For this test, 20 C constant current (CC) and constant voltage (CV) were applied to charge the cell followed by 20 C CC discharge. This charge and discharge cycle was applied five times and increased by 20 C a further five times until 100 C was applied. The final five cycles involved 20 C CC and CV charges followed by CV discharge.

During this extreme testing regime, the LFP cell did not undergo thermal runaway nor did it fail catastrophically. Temperatures were logged at three locations on the outside surface of the cell including the top (positive end), the middle, and the bottom of the cell (negative end).  The temperature of the cell was observed to increase markedly during discharge, with the middle of the cell seeing the greatest increase. Cell temperatures rose by approximately 35 ◦C during the first five cycles of the test, but with further current increases, they only rose by 2 ◦C.

It was observed that charge and discharge currents could reach a magnitude of 1.38 and 4.4 times the manufacturer’s specifications. respectively. However, the application of these currents resulted in a rapid decrease in capacity in the first 60 cycles as well as an increase in resistance.

The cells were also subjected to a high rate cycling test with charging and discharging rates of 20C for 500 cycles. (Image Source: Univ. of Warwick, MDPI, Creative Commons Attribution)

“The testing showed there is a window for operating batteries above manufacturer stated current limits, however, whilst maintaining manufacturer stated voltage limits. We need to ensure that batteries operate in the safest manner possible, and for an appropriate practical lifetime, which is why the manufacturers have these limits,” said Justin Holloway, Lead Engineer from WMG.

Following all of this abuse, the investigators observed deformation of the “jelly roll” (coiled electrodes and separator) with the formation of lithium plating from testing and aging. These deformations began at the center of the cell in an axial direction towards the outside of the cell. This suggests that the core of the cell was the hottest part of the cell during the high current flow.

Holloway noted, “We also identified thermal fatigue as the driving mechanism for jelly roll deformation. With each cycle of charge and discharge, the cell experienced thermal stresses causing deformation of its components. These deformations grew progressively with cycle number, while the jelly roll was constrained mechanically by the rigid outer can and center pin.”

This observation also provided an idea for building batteries that are more resistant to abuse. “If convection cooling could be applied to the center of the cell where the cell was the hottest, these deformations could be mitigated and controlled, allowing the cell to maintain capacity and resistance criteria for longer,” said Holloway.

Although these results from WMG are only applicable to LFP battery chemistries, they do provide some indication that this lithium-ion chemistry at least is capable of safely withstanding significant abuse. It will be interesting to see if similar research using nickel-based cathodes results in the same ability to withstand such abuse.