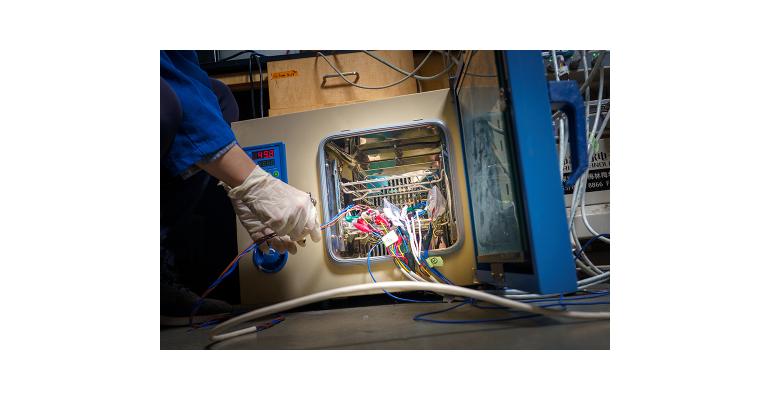 Researchers from UC San Diego testing the high performance of battery pouch cells in an oven heated to 50 degrees Celsius. A novel electrolyte facilitated the development of lithium-sulfur batteries that perform well at extreme temperatures on both ends of the spectrum.
A liquid electrolyte for lithium-sulfur batteries paves the way for operation at both very high and low temperatures.

While lithium-based batteries have become the de facto standard for many electronic devices as well as electric vehicles (EV), they typically haven’t worked well at extreme temperatures--which is causing complications in their long-term viability for the latter.

That may be set to change thanks to engineers at the University of California San Diego (UC San Diego), who have developed lithium-sulfur batteries that perform well at extreme temperatures on both ends of the spectrum—i.e., freezing cold or scorching hot—even when operating at a high energy density, they said.

The invention paves the way for EVs that can drive further on one charge even in cold climates, researchers said. It also can save manufacturers money by reducing or even eliminating the need for cooling systems that keep batteries from overheating in places where it’s extremely hot, they said.

Because EV battery packs are typically under the floor of the vehicle, they are exposed to hot roads, requiring a need for “high temperature operation in areas where the ambient temperature can reach the triple digits,” Zheng Chen, a professor of nanoengineering at the UC San Diego Jacobs School of Engineering who led the study, noted in a press statement.

“Also, batteries warm up just from having a current run through during operation,” observed Chen, who’s also a faculty member of the UC San Diego Sustainable Power and Energy Center. “If the batteries cannot tolerate this warmup at high temperature, their performance will quickly degrade.”

Key to the novel design is a novel electrolyte developed by Chen’s team that can function optimally through a wide temperature range, researchers said. It also features compatibility with a high-energy anode and cathode to facilitate the development of a complete prototype device.

The electrolyte is comprised of a liquid solution of dibutyl ether mixed with a lithium salt. It’s the liquid part of the material is what makes gives it its capability to operate at extreme temperatures, researchers said.

Dibutyl ether has a particular characteristic in that its molecules bind weakly to lithium ions; this means that the electrolyte molecules easily can release lithium ions as the battery runs. Researchers discovered this weak molecular interaction in previous research, in which they found it can improve battery performance at sub-zero temperatures.

The liquid also works well at the high end of the temperature spectrum because, with a boiling point of 141 Celsius (C), or 286 Fahrenheit (F), it stays liquid at high temperatures, researchers said.

Is Lithium-Sulfur the Future?

While its ability to operate at extreme temperatures is all well and good, the electrolyte would not be useful for this particular research unless it was compatible with a lithium-sulfur battery—which it is, researchers said. In fact, it appears to prevent some of the key reactions within a lithium-sulfur battery that have precluded its long-term viability for EVs and other applications, they said.

Lithium-sulfur batteries are comprised of an anode made of lithium metal and a sulfur-based cathode. Scientists believe they could be the dominant battery design of the future because they can store up to two times more energy per kilogram than current lithium-ion designs—which, in the case of EVs, could translate into doubling their range without making the battery pack any heavier.

These devices also promise lower manufacturing costs, especially because they use at their core an earth-abundant material in lieu of lithium, which is both complex and unethical to source.

Lithium-sulfur batteries aren’t without their drawbacks, however; both the cathode and anode have inherent performance issues that have precluded previous devices from lasting more than tens of cycles.

Sulfur cathodes tend to dissolve during battery operation—a scenario that worsens at high temperatures.  Moreover, lithium-metal anodes are prone to the formation of dendrites that can pierce other of the battery, causing it to fail, sometimes catastrophically.

All of this has made developing a viable lithium-sulfur battery that can operate at a high energy density—a requirement for EVs—a daunting task, which becomes even more complicated when it has to work through a wide temperature range, Chen acknowledged.

“If you want a battery with high energy density, you typically need to use very harsh, complicated chemistry,” he said in a press statement. “High energy means more reactions are happening, which means less stability, more degradation.”

Electrolyte to the Rescue

Fortunately, the dibutyl ether electrolyte developed by the UC San Diego team prevents these issues, even at high and low temperatures, researchers found. The team also engineered the sulfur cathode to be more stable by grafting it to a polymer, which prevents more sulfur from dissolving into the electrolyte, they said.

All of this resulted in a device that, in laboratory tests, could sustain much longer cycling lives than a typical lithium-sulfur battery, researchers found.

Specifically, the proof-of-concept batteries retained 87.5 percent and 115.9 percent of their energy capacity at -40 degrees C and 50 degrees C (-40 degrees F and 122 F), respectively. They also had high Coulombic efficiencies of 98.2 percent and 98.7 percent at these temperatures, respectively, which means the batteries can undergo more charge and discharge cycles before they stop working, researchers said.

“Our electrolyte helps improve both the cathode side and anode side while providing high conductivity and interfacial stability,” Chen said in a press statement.

Researchers published a paper on their work in the journal Proceedings of the National Academy of Sciences (PNAS).

The team plans to continue to work on the battery chemistry in terms of scaling. They hope to optimize it to work at even higher temperatures on both ends of the scale, as well as further extend its cycle life, researchers said