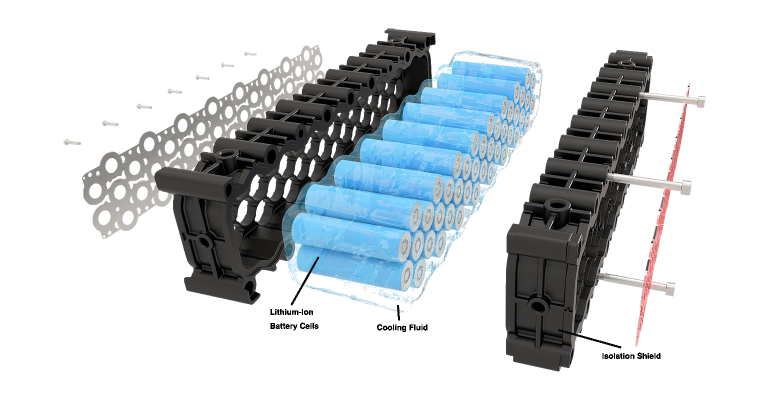 In this Xing Mobility diagram of its Immersio system, the individual lithium cells reside in a bath of temperature-controlled coolant.
The Immersio XM25 keeps cell temperatures low and steady by completely immersing them in coolant.

On hot days in the old neighborhood, kids cooled off with a popsicle or took refuge near fans; others ran through a sprinkler. But some—the most fortunate ones—were able to beat the heat by jumping into a swimming pool. There is nothing like complete immersion in the deep end for keeping cool.

This lesson in temperature control is core to the Immersio XM25 battery system, introduced by Taiwan-based Xing Mobility at the Battery Show Europe in Stuttgart, Germany, in June.

Where other battery systems traditionally employ cooling plates or coolant channels that contact only a part of a battery, the XM25 system completely immerses the battery cells in a bath of cooled dielectric coolant that is pumped through the battery pack.

The need for keeping the battery cool is serious. High heat can not only reduce performance and shorten battery life, it can also lead to thermal runaway, which is when high temperatures cause exothermic reactions within the battery, which increases its temperature further—leading to overheating and, possibly, battery explosion.

The XM25 system builds on the company’s Immersio 1.0 battery system, which it introduced in 2019; the patented immersion cooling system has been in development since 1915, according to the company. The new variation is particularly suitable for heavier vehicles used in construction, agriculture, and the like. It is scheduled to go into production as part of a new electric vehicle produced by an unnamed Asia-based commercial vehicle manufacturer by the end of the year.

The temperature stability provided by the immersion system enables a range of advantages, including faster charging, higher power output (up to 2,000 A per 10 sec), weight savings, extended battery life, and safer user conditions, according to company literature.

Xing Mobility’s system isn’t the only immersion-based system in the industry. In 2021, Stuttgart-based automotive supplier Mahle introduced its own version, touting similar advantages. In contrast with Xing Mobility’s Immersio XM25, which is aimed at heavier commercial equipment, Mahle is targeting the automotive EV market, according to a Mahle news release.