Battery Storage Will Help China Reach Carbon Neutrality By 2060: Can Others Keep Up? 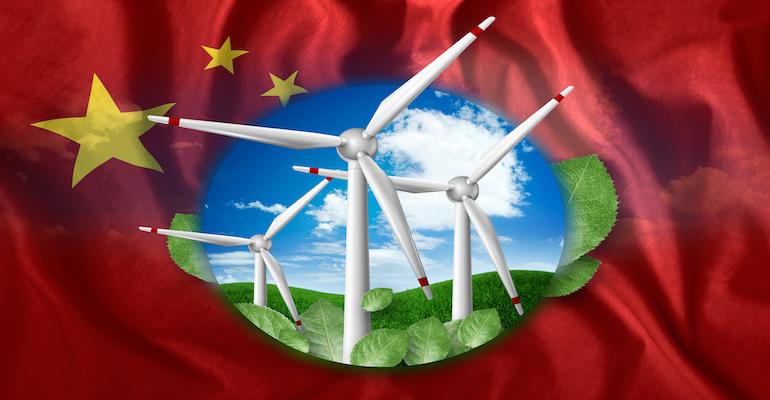 There are two reasons why the development of advanced batteries for energy storage is undergoing such massive growth. The first is the transition of the transportation system away from fossil fuels and to electrification. This has pushed the development of lithium-ion batteries that can supply large amounts of energy and power, be recharged rapidly, are safe, and can be produced at prices that allow electric vehicles (EVs) to be cost-competitive with gasoline internal combustion engine (ICE) vehicles.

The second big push for energy storage has been the need to move away from fossil fuels and their greenhouse gas (GHG0 emissions to renewable energy, specifically wind and solar. Because both of these energy sources are intermittent, battery storage is seen as the most practical and cost-effective way of moving them to the mainstream.

Related: Let’s Meet the 7 Top Battery Suppliers That Are Leading The EV Revolution

Despite a recognition of the importance of both a transition to renewable energy and the electrification of the transportation fleet, the share of fossil fuels in the world’s energy mixed has barely changed in the past decade. According to a report released by the Paris-based think tank REN21, fossil fuels accounted for 80.3% of energy consumption in 2009, compared with 80.2% in 2019. Over that period, "modern renewables" only grew from 8.7% to 11.2%.

The 2019 breakdown in the renewables category—based on data from the International Energy Agency (IEA)—was: 1% biofuels for transport, 2.4% wind, solar, biomass, geothermal, and ocean power, 3.6% hydropower, and 4.2% biomass, solar, and geothermal heat.

China is the world’s largest consumer of energy, well ahead and consuming two-thirds more energy than the second-place consumer, the United States. In 2019, China’s energy mix included 58% coal, 20% oil, 8% natural gas, 8% hydroelectricity, 2% nuclear, and 5% other renewables like wind and solar. With 86% of its energy coming from fossil fuels, China has been heavily criticized, particularly by those who do not want to see other countries like the US pull away from coal, oil, and gas.

Where will China go? In September 2020, China’s President Xi Jinping announced via a video link before the United Nations Assembly in New York that his nation would take a series of steps to reach carbon neutrality by 2060. Reaching that goal is daunting and will require a complete redesign of China’s present-day energy system. Tsinghua University’s Institute of Energy, Environment, and Economy in Beijing worked out the details of an energy mix that would get China to carbon neutrality within that timeframe.

To see the scope of the change, Bruno Venditti of Visual Capitalist created a set of graphical images for Visualizing China’s Energy Transition in 5 Charts. The most interesting two images show where China’s energy mix will be in 2025, and where it will need to evolve by 2060: 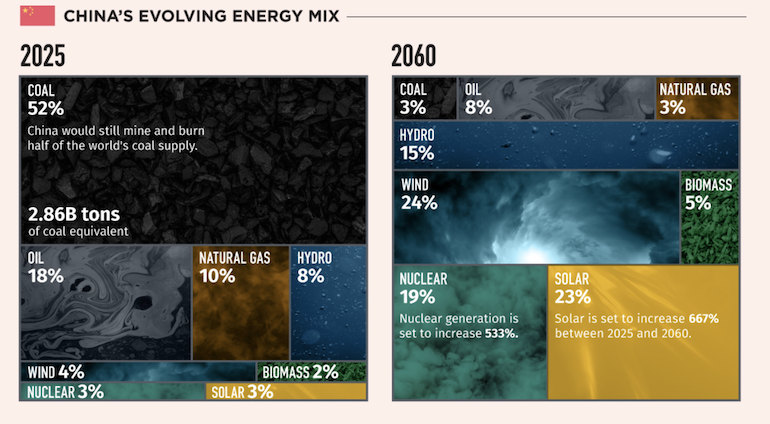 When compared to 2019, China’s fossil fuel usage will drop just 6%and wind, solar, nuclear, and other renewables will increase only 5%. By 2060, all of that turns around with fossil fuels making up just 14% of the energy total and nuclear and renewables making up 71% of the energy system. Significantly, the intermittent renewable energy produced by both solar and wind, 47% of the total, will require battery energy storage to meet these goals—and China is presently the undisputed world leader in lithium-ion battery manufacturing.

There is nobody who would say China’s plans for carbon neutrality are not ambitious. On the other hand, they are the path that China and other countries, notably the US, need to take if climate change will ever become manageable. Hold on tight, it won’t be an easy journey.

Did You Need Proof? The US Government Shows That EVs Are Cheaper to Run
Jun 25, 2021