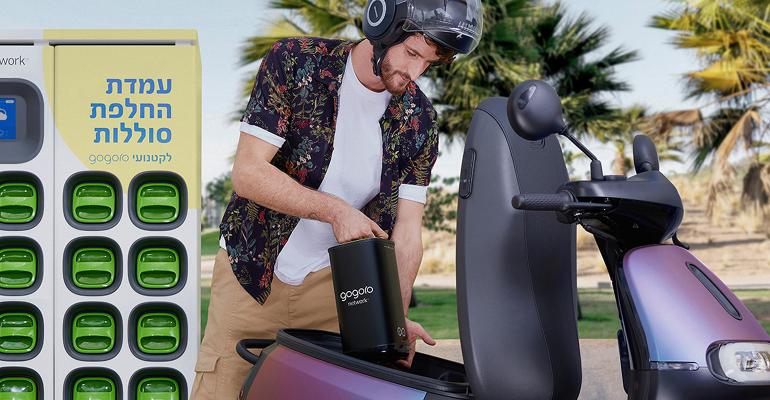 Rather than plugging in a Smartscooter to recharge it, riders simply swap out depleted Panasonic batteries for fresh ones at a 'GoStation' for a monthly subscription fee.
Taiwan-based scooter maker’s battery-swapping network tallies 325+ million swaps—around 340,000 per day.

What does a Taiwan-based e-scooter manufacturer have to teach the world about the battery business? A lot, apparently.

Gogoro Smartscooters are powered by what the company calls the G1 Aluminum Liquid-Cooled Permanent Magnet Synchronous Motor. Sensors throughout the cycle collect data such as battery level and consumption rate, available to riders via Gogoro mobile apps.

Central to the company’s growth is what it calls the Gogoro Energy Network. Rather than plugging in a Smartscooter to recharge it, riders simply swap out depleted Li-ion batteries for fresh ones at a GoStation for a monthly subscription fee.

According to the company’s website, Gogoro surpassed 500,000 subscribers in Taiwan this past August and has enabled more than 325 million battery swaps, around 340,000 per day. In addition, the company supports 10 other two-wheel vehicle makers so they too can use GoStations for battery swapping (“Powered by Gogoro”), accounting for more than 92% of Taiwan’s electric two-wheel refueling.

The rest of the world is taking notice:

While the Panasonic Li-Io cartridge 18650 battery is well-suited to the battery-swapping concept, the same can’t be said for the heavy, built-in batteries used in electric cars and trucks.

While some carmakers are considering bundled but easily detachable battery packs for delivery vans and light trucks, a recent article in The Economist noted that while battery-swapping ideas for cars do exist, most manufacturers foresee better-performing battery designs and an improved charging infrastructure as the eventual solution to charging speed challenges.