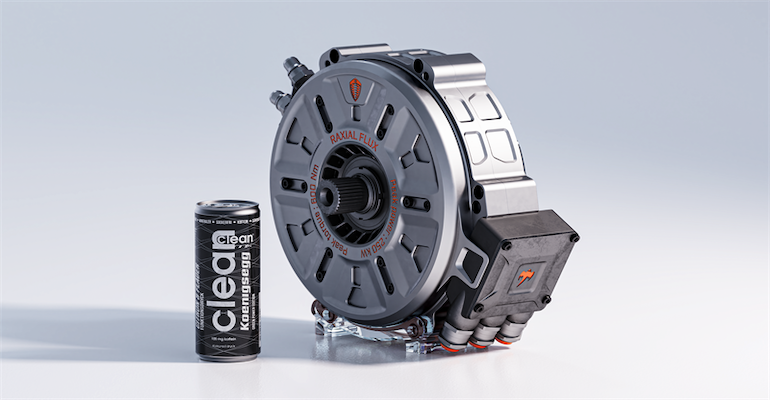 Koenigsegg Automotive AB is a Swedish manufacturer, based in Ängelholm, Skåne County, Sweden, that has specialized in high-performance sports cars. The company was founded in 1994 in Sweden by Christian von Koenigsegg and the company's first street-legal production car which was introduced in 2002. In 2009, Koenigsegg attempted to buy the remains of Saab from General Motors but pulled the plug on the deal at the last minute. Historically, Koenigsegg has pulled extraordinary power and performance from internal combustion engines (ICE) but more recently has turned its engineering prowess toward electrification.

The company’s newest innovation, the Quark electric motor uses a novel torque/power-rich balance between radial(power-dense) and axial(torque-dense) flux topology—a concept that it is calling Raxial Flux. In addition, Koenigsegg has integrated two Quark E-motors with one of its in-house six-phase David inverters, plus planetary gear sets, to create the Terrier: a torque vectoring EV-drive unit.

According to the company, the Quark E-motor, “relooks at the fundamentals of magnetism, materials, cooling, and packaging instead of following the norm.” The mixing of radial and axial flux layout enables, “the best torque to power to weight ratio in the industry.” E-Motor Development Lead András Székely said in a news release, “We constructed the shaft within the Quark out of 300M steel used in motorsports and aerospace. Direct cooling was chosen for its higher cooling efficiency and compact design. Even the rotor uses the renowned Koenigsegg Aircore hollow carbon fiber technology (presently used in Koenigsegg’s rims, steering wheel, seats, etc).” He went on to add, “The Quark presents new benchmarks in compact and torque-rich engineering with the first production version weighing just 30 kg, producing up to 600 Nm of torque and 250 kW (335-horsepower) of power.” 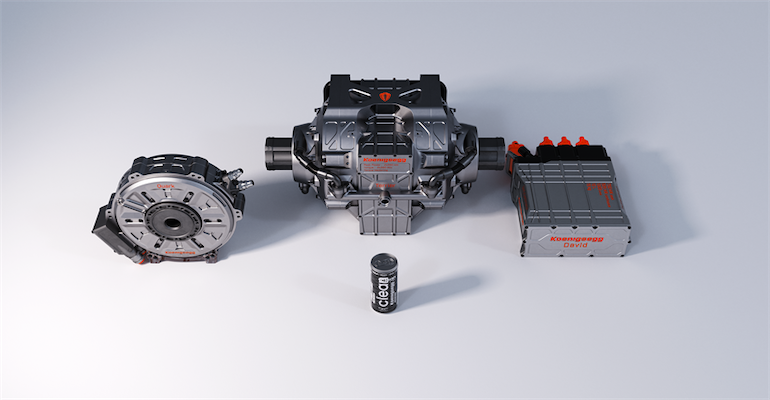 The launch of the Quark E-motor, in parallel with the recently unveiled David inverter, enabled Koenigsegg to create an EV-drive unit suitable for many EV applications – The Terrier. A two-Quark-one-David configuration presented an opportunity to create a powerful and torque dense, torque vectoring drive unit for a variety of electrification applications.

The David inverter’s 6-phase capability provides 3 phases to each Quark, thereby drastically reducing weight, size, and components. Given the Quark’s flat packaging, David can neatly slot between two Quarks to create a square super-dense package. Koenigsegg notes that “as the Quarks provide  power and torque at reasonable RPMs, only small low-ratio highly efficient planetary gear sets are needed at each output.”

Overall, the  670 hp (500 kW) and 811 lb-ft (1100 NM) output from the Terrier from a system that weighs 187 pounds could be just the thing for super-car vehicle performance or superior efficiency in applications like electric aviation.

“The Quark is unique in its high efficiency in combination with its class-leading torque-to-power-to-rpm-to-weight matrix,” said CEO and Founder Christian von Koenigsegg. “This means, when using the Quark in applications such as marine, aircraft or VTOL, there is no need for a step-down transmission, instead direct drive can be achieved, as the RPM of the motor is right from the get-go.” He went on to note that, “Small high-revving motors can have higher peak power to weight ratio, but they need transmissions in most applications in order to get to the desired output rpm and torque, causing energy loss and adding weight and complexity to do the same job. So any benefit in size is lost. In other cases, like the Terrier application, the transmissions can be reduced in size and complexity compared to higher-revving, less torque dense motors, which is also a big win.”

9 Breathtaking Electric Sports Cars That Are at the Peak of EV Performance
Aug 03, 2021