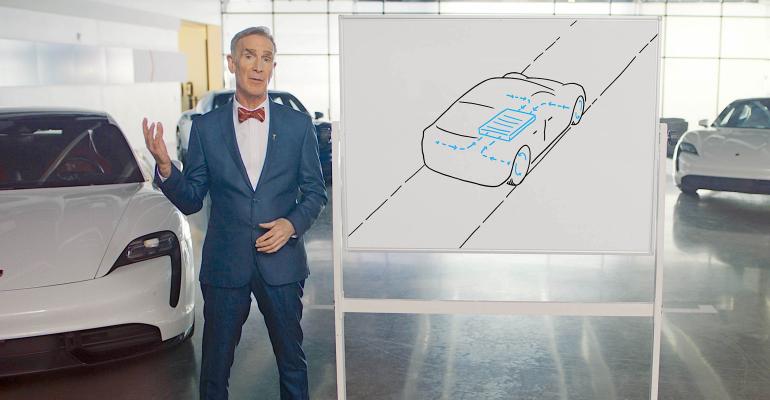 Bill Nye, The Science Guy has deployed his science evangelism to help consumers understand the significant differences between Porsche’s Taycan electric vehicle and other, more familiar models like the Tesla Model S.

As we described in our coverage of the Taycan’s introduction, Porsche has employed an 800-volt battery and electrical system instead of the current standard 400-v system. And it features a two-speed transmission rather than the usual single-speed EV gearbox.

Related: Summarized for You: 5 Different EV Surveys Offer Hints on What Comes Next

Nye dives into these and other technical subjects to quickly and easily convey what makes the Taycan the Porsche of EVs.

Porsche has dedicated a YouTube channel just to the five-video series on the Taycan, leaving us the hope that the company has bigger plans for future collaborations with the science star. Click through our gallery to see them.

Get Out of the Laboratory: Off-Road Racing Is One Way to Prove EV Abilities
Apr 29, 2021

GM or Hyundai? Which Company Has Best Solution to EV Battery Fires?
May 07, 2021