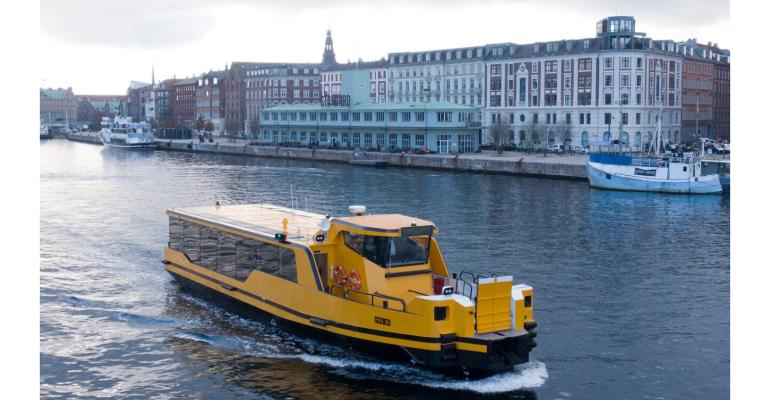 The fully electric Bryggen Ferry was an Enchandia project with Damen Shipyards. Seven of the passenger vessels now ply the waterways of Copenhagen.
Lithium-titanium-oxide technology supplies the current amidst the currents.

While the automotive industry is busy making headlines with electric vehicle advancements, the rest of the transportation sector is left playing catchup. Technology in the maritime industry is still a way out from seeing cargo ships go fully electric.

One reason for this is that we simply don’t yet have batteries with the capacity to support the long-distance travel of the maritime industry. However, to this point, shorter-distance travel on ferries has yield promising results.

One company that has been a pioneer in this field has been Swedish company Echandia, who has been leading the way by supplying heavy-duty energy storage for maritime applications. In this article, we’ll explore Echandia’s technology, the role it’s playing in the industry, and the importance it may have in the industry moving forward.

For maritime applications like ferries, which have the luxury of frequent docking and recharging, the most important battery specification is not capacity, but rather durability. To hone in on this, Echandia utilizes batteries that are based on a lithium-titanium-oxide (LTO) chemistry, a technology that has been proven to offer long lifecycles and high durability.

Beyond this, Echandia is unique in its goal to provide a durable energy system with the smallest amount of oversizing possible. In general, batteries are designed to be oversized, meaning that they are made larger with the expectation that, over time, the power output will decline. Enchandia also claims to combat this challenge through the use of its LTO batteries, which are generally more efficient than competing chemistries such as nickel-manganese-cobalt (NMC) and lithium-iron-phosphate (LFP) batteries. With a more efficient battery that also offers a long lifecycle, less oversizing is required to meet target power outputs over the battery’s life.

So far, Enchandia’s LTO battery systems have been tested to remain viable for 30,000 charge cycles and support supercharging at the rate of 10 minutes per charge. Further, they offer a high level of durability, where the company guarantees at least 5 years of life on each energy system.

Thanks to their impressive technology, Echandia, and its LTO technology, are catching on and picking up clients in waterways all over the world.

In Copenhagen, Arriva Denmark and Damen trust Echandia’s LTO batteries to power a seven-vessel fleet of all-electric ferries. Since their debut, Damen estimates that CO2 emissions from Copenhagen’s public transportation have reduced by 10%.

A separate venture with Damen in Rotterdam utilizes the energy systems to power six hybrid and three fully electric ferries. The hybrid catamarans are charged eight times a day and the electric ones are charged eighteen times, with each charge taking only 6.4 minutes.

To realize plans for the southern Indian city of Kochi, Siemens partnered with Echandia to supply 23 electric ferries with plans to build up to 55 more. These passenger boats can carry up to 100 people at a time. When carrying so many people, safety is the primary concern. Sajan P. John, General Marine Manager of Kochi Metro Rail Limited said Echandia was selected to provide energy storage for this project because “the safest of all lithium chemistry was the LTO.”

On top of their current momentum, increasing regulations on carbon emissions within the maritime industry may further bolster Encahndia’s place in the market.

In specific, the International Maritime Organization (IMO) has recently begun passing regulations similar to lower emissions and increase the efficiency of shipping worldwide. Going into effect in January 2023, ships will have to calculate their energy efficiency existing ship index (EEXI) and carbon intensity indicator (CII). Every year moving forward, ships will receive a grade based on these values and those below a certain threshold will be required to take corrective action. While these rules mainly pertain to cargo shipping, it is a sign for all to explore options to electrify and improve efficiency.

The IMO is committed to reducing greenhouse gas emissions in shipping by 50% by the year 2050 with 2008 emissions as the benchmark. This will be no easy feat; cargo ships can consume hundreds of tons of fuel oil every day.

Though not proven on a scale larger than a ferry, Echandia’s technology is a promising start in these efforts and may be an example for others to follow moving forward. Their collection of successful projects blazes a trail for broader electrification and hybridization in the industry.