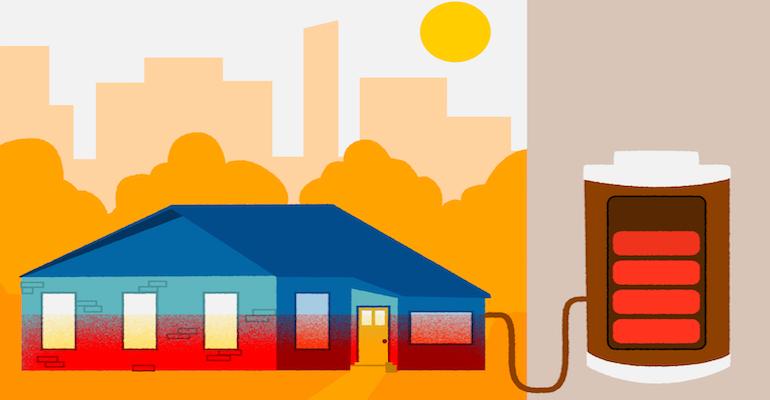 Device comprised of low-cost, easy-to-source materials could be used to preserve electricity from alternative sources and use it when needed.

Researchers have made a breakthrough in grid-level storage for alternative energy sources like solar and wind with the development of a battery that can lock in energy for months without losing much storage capacity, they said.

A team from the Department of Energy’s (DoE’s) Pacific Northwest National Laboratory (PNNL) developed what’s called the “freeze-thaw battery”—so-named because it freezes its energy for use later—out of mainly common, Earth-abundant materials.

The prototype battery—about the size of a hockey puck—is comprised of an anode and cathode made from solid plates of aluminum and nickel, respectively. These are immersed in a sea of molten-salt electrolyte that’s solid at room temperature but becomes a liquid when heated. Researchers also added sulfur—another common, low-cost element—to the electrolyte to enhance the battery’s energy capacity, they said.

The promise of the device is seasonal energy storage, allowing, for example, for the storage of solar energy during months when the sun shines often that can be saved for use during the months when there is less sun.

Related: Grid Storage Can Be Improved Using This New Method To Optimize Materials

This paves the way for a more resilient energy grid that can seamlessly incorporate renewable energy along with traditional power sources, said Imre Gyuk, Director of Energy Storage at DoE’s Office of Electricity, which funded the work.

“This research marks an important step toward a seasonal battery storage solution that overcomes the self-discharge limitations of today’s battery technologies,” he said in a press statement.

Indeed, scientists long have been trying to solve the conundrum of how to integrate renewable sources of energy—which ebb and flow with nature’s cycles—into a power grid that must put out a steady and reliable electricity stream.

The idea has been to store it in large batteries that preserve the energy until it's needed; however, while there have been some advancements in this area, no definitive solution has yet been found.

The PNNL team believes that it may have one in the freeze-thaw battery, which is first charged by heating to 180 degrees Celsius. This allows ions to flow through the liquid electrolyte to create chemical energy.

The battery allows for the freeze-thaw phenomenon because its electrolyte is molten salt—which is molecularly related to common table salt.

Because it changes its state with the temperature change and becomes solid at room temperature, the electrolyte effectively locks in the energy rather than discharges it, preserving it like food in a freezer, researchers said. Tests showed that the battery retained 92 percent of its capacity over 12 weeks.

The battery has several material advantages that keep it low-cost and thus well-suited to manufacturing. In addition to using earth-abundant metals and common salt, researchers also used fiberglass rather than typically used ceramic to create the device’s separator, which is placed between the anode and the cathode.

The use of fiberglass was possible because of the battery’s chemical stability, which not only makes it cheaper to produce but also more robust when undergoing freeze-thaw cycles, researchers said.

“Reducing battery costs is critical,” noted PNNL researcher Guosheng Li, in a press statement. “That is why we’ve chosen common, less-expensive materials to work with, and why we focused on removing the ceramic separator.”

Overall, the battery’s energy is stored at a materials cost of about $23 per kilowatt-hour, a measurement made before a recent jump in the cost of nickel.

Researchers are currently eyeing the use of iron, which is even less expensive, to replace nickel. This would bring the cost of the battery’s materials down to around $6 per kilowatt-hour—or roughly 15 times less than the materials cost of today’s lithium-ion batteries, they said.

Researchers published a paper on their work in the journal Cell Reports Physical Science.

The vision that researchers ultimately have for the battery’s use is to be charged and discharged once or twice a year to optimize both the storage and release of energy. This means it would not need to last hundreds or thousands of cycles, like the batteries that power everyday devices or electric vehicles (EVs).