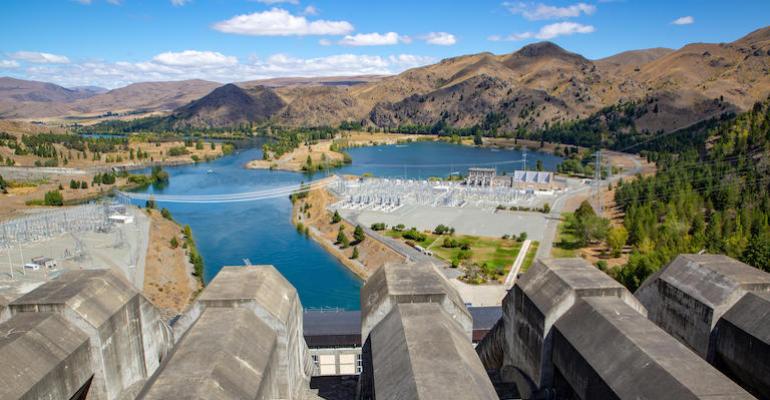 New Zealand (NZ) is building a big battery for renewable energy storage. The country produces over 80 percent of its electricity needs through renewable forms of energy. Between 55 and 60 percent of its electricity comes from hydroelectric sources, using waterpower to turn turbines that ultimately generate electrical current. In general, NZ is a rainy country, so rivers, lakes, and reservoirs are kept well replenished, providing the flowing water that generates the nation’s power needs.

The problem with hydroelectric power is that future changing weather patterns could result in lower rainfall amounts, reducing the effectiveness of these systems. NZ however also sits directly on the convergence of several tectonic plates—it is subject to a large number of earthquakes (bad) and has a lot of volcanic activity (which can be good). This means that another form of energy generation, geothermal, can be exploited. Steam and superheated water from volcanic vents can be used to power turbines that drive generators to produce electricity. Geothermal provides about 18 percent of NZ’s electric power, primarily from fields near an active volcano located near the center of the North Island.

Related: Uncertainty and the Need for Trillions of Dollars Are Hurdles to a Net Zero Electricity Grid by 2040

Wind power is a natural for NZ and currently, around 5 percent of the country’s electricity comes from its wind turbines. There are many regions of the country that have mean wind speeds of 10 meters/second or more, and plans are underway to increase the amount of wind power generation. The other variable renewable resource, solar power, only provides about 0.5 percent of NZ’s electricity—it is finding usage in distributed power generation in remote locations rather than to provide power directly to the grid.

One thing that intermittent renewable energy sources like wind and solar need is a way to store energy when it is generated and return it when the wind isn’t blowing or the sun isn’t shining. NZ is investing in pumped hydro storage where water is pumped into an elevated reservoir when there is excess power and then the energy is returned as the water flows back to its base level through a turbine that generates electricity. Pumped hydro storage is the most common form of energy storage worldwide.

Another way to store electrical energy from intermittent renewable sources is by using large batteries. NZ’s neighbor Australia has several large-scale batteries attached to its power grid to provide backup power and also to store renewable energy. A grid-connected battery and solar farm are being planned by Meridian Energy in NZ, north of Auckland on the North Island to improve the stability of the national grid, reduce the chance of network outages and allow more electricity to flow north from South Island generators.

Meridian has purchased 105 hectares of land adjacent to the Marsden Point oil refinery for the Ruakaka Energy Park, which will house a battery energy storage system (BESS) at least 100 megawatts (MW) in capacity, as well as a utility-scale solar farm.

Meridian Head of Renewable Development Rebecca Knott said, in a company news release, that the energy park represents the beginning of Aotearoa’s (NZ’s) next-generation electricity grid and supports the country’s transition to 100% renewables.

“Aotearoa is moving to a fully renewable electricity system, which means generation will be made up of more intermittent sources like wind and solar.  During periods of peak demand when there is little sun or wind, we will need stored energy that can be dispatched quickly.

“New battery technology can meet this challenge by delivering power when needed for short periods.  We’re excited about the potential for Ruakaka Energy Park to contribute to a clean, modern, and resilient energy grid for Aotearoa,” said Knott.

According to the company, Meridian is one of many potential developers in NZ and estimates between 4 and 5 batteries of this scale will need to be installed strategically around the country by 2030.  The solar farm will have the capacity to supply enough power for 15,000 households and will be constructed once the BESS is up and running—The company expects the Marsden Point BESS to be operational by mid-2023.

“The BESS is the first of many we intend to build which will have the capacity to supply instantaneous power to the grid and enable more electricity to flow from renewable generators in the South Island over the Cook Strait cable,” said Knott. “We’re currently talking to iwi and other community stakeholders about our plans for the site and undertaking ecological and geotechnical site assessments as part of our due diligence.”

Can Renewables Stabilize and Support the Power Grid? Hawaiians Will Find Out
Sep 01, 2021