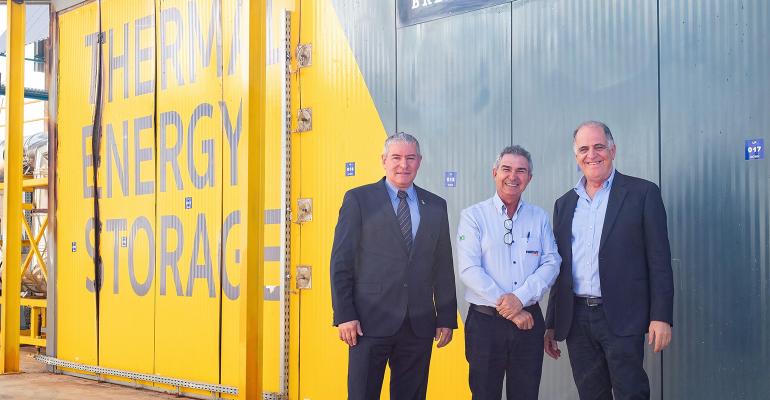 Fortlev, which makes water storage solutions including tanks, pipes, and connectors, is using a Brenmiller Energy bGen Thermal Energy Storage (TES) unit at its production facility in Anápolis, Brazil. The 1-MWh bGen unit uses renewable biomass instead of natural gas to heat the air for Fortlev’s roto-molding process. This lowers fuel costs for the process by 75% and cuts associated GHG emissions by about 800 metric tons a year.

The bGen combines thermal storage, heat exchange, and steam generation in one unit. Crushed rocks inside the unit are heated to more than 600°C, then store that heat for minutes, hours, or days until required. The bGen can be charged not only by biomass, flue gas, or recovered heat, but also by electricity. Brenmiller said its method stores and converts energy more efficiently than battery-based energy storage technologies.

Next, Fortlev and Brenmiller Energy are planning to install 60 bGen units at the facility for further emissions reductions.

48,000 metric tons of GHG emissions is about the equivalent of the GHG emissions produced by 10,500 gas-powered passenger vehicles annually.

The companies now are discussing selection of the next Fortlev site for deployment of bGen. Fortlev has seven other manufacturing facilities in Brazil. And, Fortlev Solar plans to open a facility to produce bGen units for the Brazilian market.