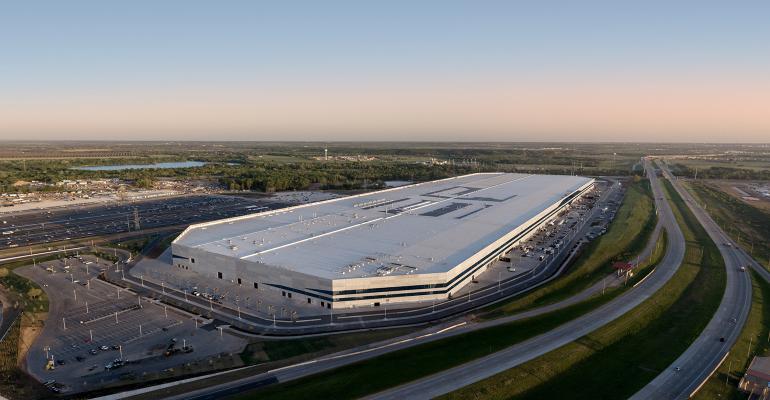 Tesla is believed to be moving the majority of its battery manufacturing equipment from Gigafactory Berlin to Gigafactory Texas, shown here.
Delays have prompted a transition from production in Germany to Tesla’s Texas factory.

In many respects, the most significant issues that the Tesla company has faced to date have been around supply chain and manufacturing. As a multinational company that sells and services vehicles in the US, Canada, Mexico, Europe, and Asia Pacific, the challenge of establishing a high-volume and reliable supply chain is particularly difficult.

To address this, Tesla has taken much of the matter into its own hands, producing everything for its cars including engines, batteries, chassis, and more. At the same time, to fulfill a global supply chain, the company has established factories all over the world.

Now, reports are circulating that unexpected delays are forcing the company to transition its battery manufacturing away from its Berlin factory and towards its Texas factory instead. In this article, we’ll look at the locations and roles of Tesla’s most notable factories and look deeper at the issues happening in Germany.

Where are Tesla’s Factories?

In order to fulfill a global supply chain, Tesla has established different manufacturing sites all over the world.

Amongst these sites, the six that are highlighted on Tesla’s manufacturing website include:

Of these factories, a large majority of them are highly focused on the production of batteries for Tesla’s electric vehicles. The term “Gigafactory” is Tesla’s nomenclature for factories that produce these batteries, with each factory built around the world to support the eventual goal of producing 500,000 vehicles per year.

Tesla Transitions from Germany to Texas

Recently, reports have been released that indicate that, despite Tesla’s intentions and efforts, the plan to manufacture lithium-ion batteries in Gigafactory Berlin is not coming to fruition.

While specific details aren’t fully available, sources close to Tesla indicate that delays in their battery’s electrode’s dry coating process have become an issue in Germany. An extremely complex and crucial piece in their battery production, the dry coating has proven to be a bottleneck in the production process that now requires a closer set of eyes.

For this reason, Tesla is believed to be moving the majority of its battery manufacturing equipment from Gigafactory Berling to Gigafactory Texas. Here, at Tesla’s global headquarters, the complex process can be watched with more scrutiny as they perfect it and ramp it up for volume production.

Currently, only the machines for electrode production will remain onsite in Germany, while everything else is returning to the US.