Fast Charging: The Hotter the Better 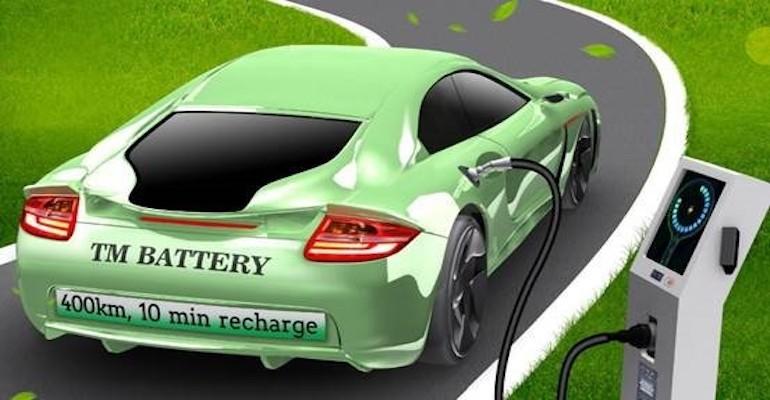 A thermally modulated battery for mass-market electric vehicles without range anxiety and with unsurpassed safety, low cost, and containing no cobalt, is being developed by a team of Penn State engineers.
By briefly heating lithium-ion batteries to 140°F, researchers have found a way to accomplish Fast Charging without degrading battery performance.

DC Fast Charging is widely viewed as one of the keys to consumer acceptance of electric vehicles. The ability to recharge a battery at a public charging station to 80% or more of its capacity in 15 minutes or less allows drivers an opportunity to travel long distances from home, making EVs a practical alternative to internal combustion engine (ICE) vehicles.

The downside to fast charging is that forcing large amounts of energy into a battery at a high rate can degrade the battery, particularly when charged at ambient temperatures under 50 degrees Fahrenheit. Researchers at Penn State found that when the charging rate is high, lithium can plate unevenly onto the carbon-graphite anode material and even form spikey dendritic crystals, reducing cell capacity and causing potential fire hazards. The team at Penn State also found that batteries heated above the lithium plating threshold, whether by external or internal heating, did not exhibit lithium plating.

They determined that if they heated the batteries to 140 degrees F for 10 minutes and then rapidly cooled them back to ambient temperatures, the lithium dendrites would not form and degradation of the battery would not occur during fast charging. Heating the battery above room temperature to around 140 degrees Fahrenheit also gives the battery a boost in reactivity which increases exponentially with temperature.

To take advantage of their discovery, the Penn State researchers have developed a prototype self-heating lithium-ion battery that uses a thin nickel foil with one end attached to the negative terminal and the other extending outside the cell to create a third terminal. When voltage is applied to the third terminal, it heats the nickel foil through resistance heating and warms the inside of the battery. When the battery's internal temperature is 140 degrees F, a thermostatic switch opens, and the battery is ready for fast charging or rapid discharging.

"We demonstrated that we could charge an electrical vehicle in ten minutes for a 200 to 300-mile range," said Chao-Yang Wang, professor of chemical engineering and professor of materials science and engineering, and director of the Electrochemical Engine Center at Penn State. "And we can do this maintaining 2,500 charging cycles or the equivalent of half a million miles of travel," he added in a Penn State news release.

To build their prototype, the team used lithium iron phosphate (LFP) for the cathode—a choice that is low in cost and avoids cobalt (a critical material that comes from a politically sensitive part of the world). LFP lithium-ion batteries are considered to have one of the safest battery chemistries available. The anode is made of very large particle graphite, a safe, light, and inexpensive material.

"This battery has reduced weight, volume, and cost," said Wang in another Penn State release.  "I am very happy that we finally found a battery that will benefit the mainstream consumer mass market." According to Wang, the batteries can produce a large amount of power upon heating—40 kilowatt-hours and 300 kilowatts of power without using expensive nickel-based cathodes. "The very fast charge allows us to downsize the battery without incurring range anxiety," said Wang. Smaller batteries cost less, which can be a factor in the effort for EVs to begin to reach cost parity with ICE vehicles. "This is how we are going to change the environment and not contribute to just the luxury cars," said Wang. "Let everyone afford electric vehicles."