GM Announces Foray into the Battery and Energy Market 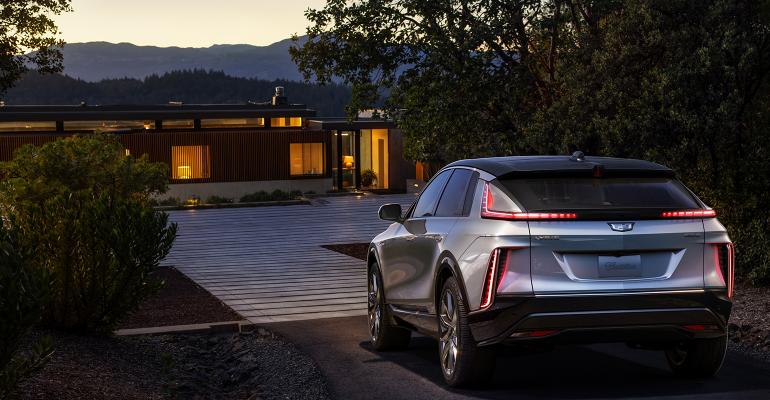 Rendering of a 2023 Cadillac LYRIQ at home.
In an effort to create an ecosystem around their EVs, General Motors is shifting focus into energy.

When it comes to garnering widespread adoption of electric vehicles (EVs), designing cars that are cost efficient, performant, and offer high range is only one part of the battle. Another significant consideration is building out the infrastructure to support EVs, including energy storage solutions and V2X technologies.

General Motors (GM) is very well aware of this fact and is now acting on it. This week, GM announced that they would be expanding their business focus with the opening of a new business unit, GM Energy, that would focus on building out the infrastructure and ecosystem necessary to support EV adoption.

In this article, we’ll look at GM’s energy offerings to this point, as well as what their plans for GM Energy entail.

Unlike competitors such as Tesla, GM does not own their EV charging network. Instead, they rely on a series of third-party charging stations and tools to support their EV offerings. The challenge here is that EV ownership becomes cumbersome for the consumer, who now must manage an array of third-party apps and subscriptions in order to charge their vehicle.

In April of 2021, GM announced Ultium Charge 360 as a solution. Ultium Charge 360 is described by GM as “a holistic charging approach that integrates charging networks, GM vehicle mobile apps, and other products and services to simplify the overall charging experience for GM electric vehicle owners.” Essentially, the platform is a type of ecosystem for GM EV owners which facilitates ease of access to charging networks and tools to support the EV without the need for managing third party solutions.

Now, GM is expanding on their EV infrastructure with the addition of two counterparts to Ultium Charge 360: Ultium Home and Ultium Commercial, all three of which are branded under the new business of GM Energy.

Alongside Ultium Charge 360, GM has announced Ultium Home as part of GM Energy.

As the name implies, Ultium Home is GM Energy’s offering to residential homeowners, with the goal of providing the tools and services necessary to facilitate the adoption of EVs in the home. Specifically, Ultium Home includes a line of charging products including a new EV charger capable of bidirectional charging for the home as well as a stationary battery pack dubbed the Powervault.

Beyond the hardware products, Ultium Home also offers a number of initiatives such as a partnership with SunPower to develop a new home energy system that will enable GM electric vehicles to provide backup energy to a home when properly equipped. The home energy system and installation services are slated to be available alongside the retail launch of the 2024 Chevrolet Silverado EV, expected Fall 2023. With bi-directional charging capabilities, the Silverado EV paired with a home energy system is expected to provide enough electricity to enable whole home backup during a grid outage, according to a SunPower news release.

Once available, Chevrolet Silverado EV customers will be able to have their home energy system installed at the same time as their Silverado EV charger to enable vehicle-to-home (V2H) power or choose to do so at a later date. For interested customers, SunPower and GM will assess the home's electrical system for compatibility with bi-directional charging. Customers can also choose to purchase a SunPower® solar system for their home.

An EV customer with solar can charge their vehicle with energy generated from their rooftop system, which is cleaner and often less expensive than charging from the grid. Customers with a home energy system, compatible EV and properly equipped home are also expected to be able to store solar-generated electricity in their vehicle's battery and export it directly into their home during the hours when electricity costs the most. This provides an opportunity for them to save even more money on electricity bills depending on home size, energy usage and utility rates.

Finally, to address the commercial side of things, GM is launching Ultium Business.

From a hardware perspective, Ultium Business is highlighted by the introduction of a larger battery storage solution consisting of megawatt batteries for large-scale energy storage. Beyond this, however, the real unique value proposition of Ultium Business is their newly offered cloud service called Energy Services Cloud.

Energy Services Cloud is a cloud-based solution to oversee the Ultium Business and Ultium Home infrastructure, offering customers with access to data about their buildings as well as energy management tools which are accessible from a centralized interface. The platform was designed to be a way of providing customers with the necessary information about their infrastructure, such as the state of the grid’s capacity and available stored energy in their storage solutions, as well as the ability to manage their assets.

A noteworthy aspect of this news is that, with these offerings, GM is putting themselves in direct competition with Tesla, who has notoriously set the trend of developing an ecosystem around their vehicles. Regardless, by introducing GM Energy, GM is doing a good thing for the EV industry making a clear effort to drive the adoption of EVs through the development of a holistic EV infrastructure.