How to Use a 6,000-Degree Microwave Plasma to Make Novel Battery Materials 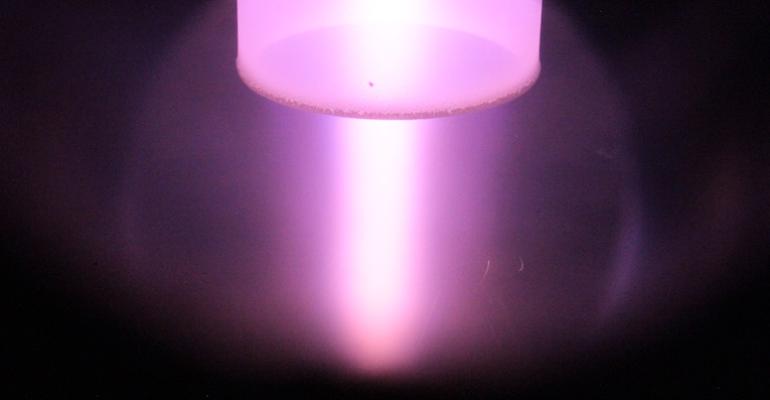 As electric vehicles (EVs) become more mainstream, the production of lithium-ion batteries to power them has become a logistical concern. The consensus is that it is more economical and practical if you can build your battery cells and packs nearby the location of your EV plant. That’s why Volkswagen has announced its plans to build six battery mega-factories in locations around Europe. Each of the mega-factories will have a capacity of 40 gigawatt-hours (GWh) to supply VW’s plans for electrification of transportation.

The question is, do battery factories need to be so large? Is it better to build one 30 GWH factory to supply a number of EV plants in the region, or to build as many as thirty 1 GWh battery factories that are co-located with the car manufacturing plant? These are questions that may have different answers if a new microwave plasma technology developed by Massachusetts-Based 6K, inc. gains widespread adoption.

6K, Inc. has developed a way to make precursor materials for lithium-ion cathodes in a way that is both quicker and more economical than traditional methods. takes a water-based solution of “Essentially what we do is take very simple salts of the necessary elements and make a water-based solution. We tend to use water-based systems with water-soluble salts for environmental reasons, and also cost,” explained Richard Holman, VP Battery Products at 6K.  “For an NMC we use a pretty high solids content of high-solubility salts, we take that solution that is highly uniform and atomically mixed, we break it into very fine droplets, and feed that directly into the plasma.”

Related: Could Graphite Made Out of Wood be Used to Produce Sustainable Battery Anodes?

Holman explained to Battery Technology how the plasma is created. “The plasma is formed using microwave generators that are commercially available—there is nothing special about them, they are used for food drying and other applications—but it’s how we apply them that matters. We use a waveguide to bring them into the reaction zone, into the specifically designed ‘torch’ and we set up a standing wave,” he told us.  “The energy density created by the standing wave is enough to form a plasma with whatever gas we are feeding through. By controlling gas flows you can extend the size of that plasma to make as small or as large a reaction zone as you want.”

The type of gas used to create the plasma can also influence the end result. “Typically, for making an oxide, that will be an oxygen plasma,” said Holman. “Very quickly, all the water gets driven off by the intense heat of the plasma, and immediately the reactions start—it’s an oxygen plasma so the kinetics are very quick. Within less than 2 seconds it converts it into the oxide. As it continues to pass through the system after the reaction has happened, the rest of it is just continuing to crystalize.” Adjusting parameters like pressure, plasma temperature, energy density, and time at temperature gives control over the profile of the material that is being created. 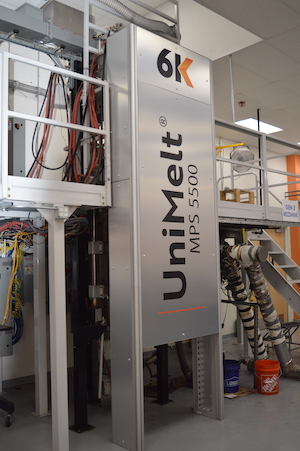 The plasma also gave the company its name. “The temperature is 6,000 degrees. Now, how much of that energy goes into the product is up to us. We can control the temperature profile by controlling a combination of residence times and just how dense that plasma is. For NMC it is about 1/3 the energy usage for our process versus the conventional process.”

“To make various NMC cathodes, we just change the ratios of the materials, it’s that simple,” Holman told Battery Technology. “We’ve done proof of concept for NCA and shown that we can make those compounds. Lithium nickel oxide is another one that we have done demonstration work on. Where we are really excited is moving beyond these chemistries to do things that (conventional) precipitation can’t do. Things that can get rid of cobalt. Dopants can improve performance but that there is no real commercial way today to get them into the product. Then there are the bigger departures. We have demonstrated that we can make LFP, and we are future-proofed. We have yet to find a compound that we can’t make.”

The plasma process that 6K uses could also potentially be used to make anode materials.  “We haven’t done graphite (anode material) yet. We get asked about it a lot, we just want to make sure the business case is sufficient for us to want to spend some time on it,” said Holman. “Most of our anode work has been focused on silicon. There the approach is going after strain-tolerant microstructures and forming them at the powder level. Not vapor deposition, not etching, not some complex templating process, but really controlling the chemistry and how it interacts with the plasma to form these strain-tolerant structures directly to powder. So by definition, you already have the scalability and low manufacturing cost.”

The 6K process can be used to create other types of anode materials. “One approach is an SiOx foam. The other approach that we are taking—we have two parallel paths in silicon—is more around in situ formed composites,” Holman told us. “These are alloy-type silicon structures where you have silicon-rich domains and conducting-reinforcing domains. You get sub-micron structures that are strain-tolerant but you’ve got that reinforcement built in so that the powder doesn’t tear itself apart. We do a lot of large-scale screening of compositions to very quickly narrow in on things that look promising. “

If making bespoke cathodes and anodes isn’t enough, the 6K team is also interested in the ceramic electrolytes (like LZO) that are being proposed for solid-state lithium metal batteries. “We have the ability to make solid electrolytes in the sizes and morphologies that are actually of interest. There is no commercial supply of materials in that format today,” said Holman. “The ideal material for someone who wants to make a sintered film or a sintered structure is small, sub-micron, spherical with a tight size distribution. There is not a process that is making those materials today. It’s made by solid-state chemistry and then grinding. And that doesn’t give you that morphology, it doesn’t give you that kind of size control, and it’s not really cost-effective and scalable. The oxide-based technologies are going to run into a supply chain problem and we are positioning ourselves to be the solution to that. We’ve already done proof of concept with LZO, shown that we can make spherical nanoscale materials that can ultimately be used to make the LZO product. I think it’s probably five years out. I am trying to be optimistic.”

Back to the question of the need to build huge mega-factories when a more local smaller battery plant might be better. “The technology is very modular. It’s a small footprint,” noted Holman. “Because it’s not labor-intensive and not energy-intensive you get a lot of economy. So you don’t need a 30 gigawatt-hour (GWh) factory to make a compelling cost case. We’ve got models for 1 GWh, 5GWh, and the difference between the 1 and the 5 you are already on the flat part of the curve.”

The small footprint and scalability of the 6K UniMelt system could allow it to be co-located with a carmaker’s EV factory. “The ideal situation is that you have UniMelts, the cell maker, the car manufacturer, and ultimately a recycling site, all in that one location. So you out only as much manufacturing as you need because you don’t need a 30 GWh factory just to make sense economically."

6K, Inc. will be attending The Battery Show and Electric and Hybrid Vehicle Technology Expo on September 14-16, 2021 at the Suburban Collection Showplace in Novi, Michigan. More information can be found here.

Battery Supply Insights from one of the Biggest National Labs in the US
Aug 11, 2021