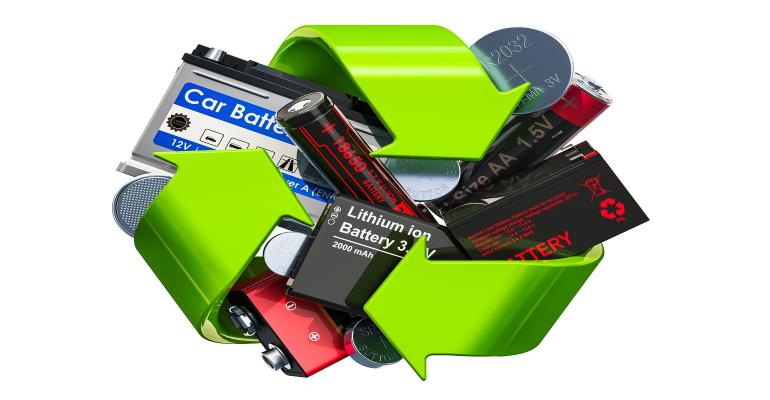 An environmentally sound process has been developed to safely recycle LFP lithium-ion batteries.

There are two general variations of lithium-ion battery chemistries that are commercially available. The most powerful option uses a cathode (positive electrode) made from nickel oxide, along with cobalt, and manganese or aluminum. Nickel-based cathodes are most commonly used for laptop batteries and in electric vehicles (EV) where their energy density and performance provide significant battery life for electronic devices and long-range for EVs. Because nickel and cobalt are both expensive materials, the cost of these batteries is significant, but the value of the reclaimed materials is high, making them a viable target for recycling.

A less powerful lithium-ion battery can be made using lithium iron phosphate (LFP), often with manganese for the cathode material. Batteries made with this cathode material are less expensive than nickel-based batteries and are considered safer as they are more stable during charging and discharging. The lower energy density has made LFP batteries a second choice much of the time, but Tesla has begun installing this battery chemistry in the Model 3 vehicles that it builds in its China plant. They are also widely used in power tools, electric buses, and power grid storage.

Because the iron, phosphorous, and manganese raw materials are inexpensive and plentiful, an LFP battery is cheaper to make, but the lack of valuable materials also makes them less attractive for recycling.

"Given these advantages, LFP batteries will have a competitive edge over other lithium-ion batteries in the market," said Zheng Chen, a professor of nanoengineering at UC San Diego said in a media release.  "It's not cost-effective to recycle them," Chen said. "It's the same dilemma with plastics—the materials are cheap, but the methods to recover them are not."

Chen and his researchers at UC have created a process for restoring spent LFP cathodes that could make it more economical to recycle these types of lithium-ion batteries. The process does the job at lower temperatures (60° to 80° C) than other battery recycling and at ambient pressure, meaning that it has lower energy costs than other methods. Also, the chemicals it uses—lithium salt, nitrogen, water, and citric acid—are inexpensive and environmentally safe.

"The whole regeneration process works at very safe conditions, so we don't need any special safety precautions or special equipment. That's why we can make this so low cost for recycling batteries," said Panpan Xu, a postdoctoral researcher in Chen's lab.

The press release described what occurs in the LFP cathode to cause its degradation in performance. “As the battery cycles, the cathode undergoes two main structural changes that are responsible for its decline in performance. The first is the loss of lithium ions, which creates empty sites called vacancies in the cathode structure. The other occurs when iron and lithium ions switch spots in the crystal structure. When this happens, they cannot easily switch back, so lithium ions become trapped and can no longer cycle through the battery.”

The recycling process developed by the researchers is straightforward. They first cycled commercial LFP cells until they had lost half their energy storage capacity. Then they took the cells apart, collected the cathode powders, and soaked the powders in a solution that contained lithium salt and citric acid. The solution was then washed with water and the powders dried by heating them.

The process restores the cathode's structure by replenishing lithium ions and making it easy for iron and lithium ions to switch back to their original spots. The switch is accomplished using citric acid, which acts as a reducing agent—a substance that donates an electron to another substance. The citric acid transfers electrons to the iron ions, which makes them less positively charged. This minimizes the electronic repulsion forces that prevent the iron ions from moving back into their original spots in the crystal structure and releasing the lithium ions back into circulation.

After the recycled powers were dried, the researchers used them to make new cathodes and tested them in both coin cells and pouch cells, and found their performance was fully restored to their original states. The process consumed 80 to 90% less energy and emits about 75% fewer greenhouse gases than other lithium-ion recycling methods. Further studies are needed on the logistics of collecting, transporting, and handling large quantities of batteries." Figuring out how to optimize these logistics is the next challenge," Chen said. "And that will bring this recycling process closer to industry adoption."

Kevin Clemens is an engineering consultant who has worked on automotive and environmental projects for more than 40 years,