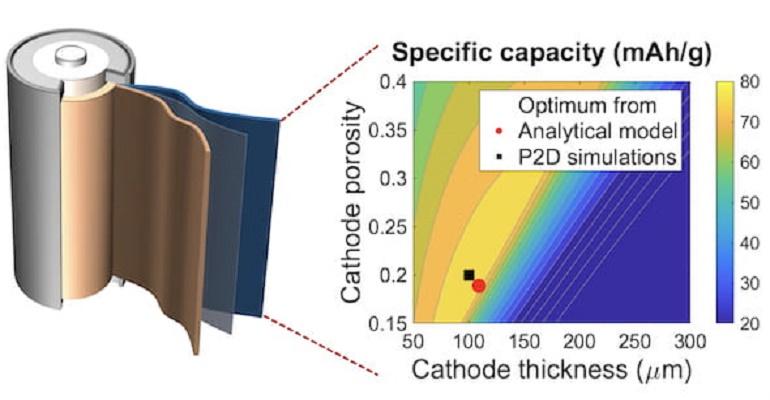 A graph that maps the capacity of batteries to cathode thickness and porosity shows a laborious search based on numerical simulations (black square) and a new Rice University algorithm (red dot) return nearly the same result. Rice researchers say their calculations are at least 100,000 times faster.
New analytical model provides a faster way to know how which battery materials will deliver certain results.

Tweaking their chemistry can be a good way to improve the performance of future battery designs. But researchers at Rice University also have found another way—a new modeling technique that is 100,000 times faster than current methods to predict how batteries will perform.

The new analytical model is different from comparable techniques in that it doesn’t require complex numerical simulation—which can be time-consuming and expensive--to inform the selection and design of battery components to get a good idea of how they will interact in practice.

The team—comprised of Ming Tang, assistant professor of materials science and nanoengineering, and graduate student Fan Wang of Rice University’s Brown School of Engineering—used a different tack than the one that’s historically been used to model battery performance to provide faster results.

“Almost everyone who designs and optimizes battery cells uses a well-established approach called P2D (for pseudo-two dimensional) simulations, which are expensive to run,” he said in a press statement.

This method is troublesome, however, especially if you want to optimize battery cells due to their “many variables and parameters that need to be carefully tuned to maximize the performance,” he said.

The model the team designed can accelerate the design process by offering simpler insights into material performance that can’t necessarily be gleaned from numerical simulations, Tang said.

The result is a model that provides an accuracy of battery performance within 10 percent more than computational algorithms so scientists can more quickly assess the rate capability of a battery. Moreover, the team made the model available freely online so other scientists also can use it.

Typically when optimizing batteries, scientists must decide on whether to design devices that store more energy or have a higher power density, which is the rate at which they can release that stored energy. This combination of qualities in one battery depends on the materials used and how they are configured, as well as internal device structures, such as porosity.

Computer modeling for battery performance according to these parameters is a time-consuming affair, Tang explained.

“Typically, you need to make tens of thousands of calculations and sometimes more to search the parameter space and find the best combination,” he said in a press statement. “It’s not impossible, but it takes a really long time.”

The model takes a considerably shorter time to come up with viable parameters to optimize batteries. Moreover, it can be implemented in readily available software like MATLAB and Excel, and even on a calculator.

The team published a paper on their work in the journal Cell Reports Physical Science.

To test the model’s efficacy, researchers made it search for the optimal porosity and thickness of an electrode in common full- and half-cell batteries, the latter of which has only one electrode.

The model delivered a performance prediction that electrodes with “uniform reaction” behavior—such as nickel-manganese-cobalt and nickel-cobalt-aluminum oxide—are best suited for applications that require thick electrodes to increase the energy density.

Another design solution the model delivered in testing was to suggest that battery half-cells have inherently better rate capability, meaning their performance is not a reliable indicator of how they will perform in the full cells used in commercial batteries.