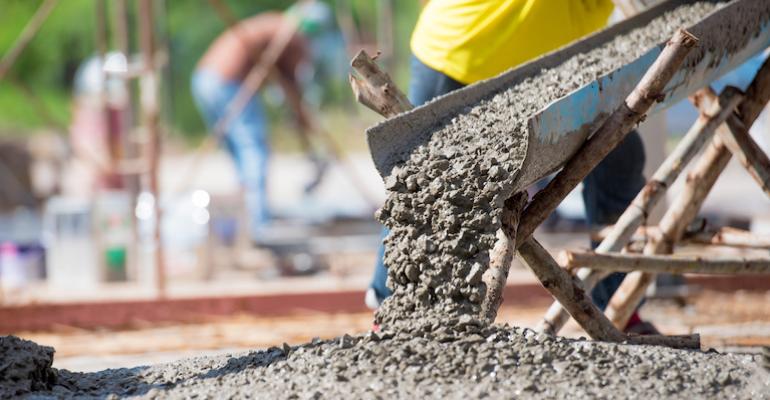 A new idea for a battery made from cement could provide a novel way to use buildings and infrastructure.

The reality is that you can make a battery out of almost anything. Two dissimilar metal electrodes, an electrolyte between them to transfer charge, and the electrochemical reaction produces excess electrons that can be siphoned off to run an electronic device.

Related: Might it be Viable to Make Lithium-Free Batteries Using Organic Redox Polymers?

The problem is that unless the electrodes and electrolyte are carefully chosen, your ad-hoc battery won’t produce very much electricity. What if your low power was really big—huge, in fact. That’s the idea behind a cement-based battery under study at the Chalmers University of Technology in Sweden. By making the battery the size of a building, or a bridge, that low-power battery might store enough electricity to power a 5G network, or sensors that monitor critical infrastructure.

The concept developed at Chalmers involves a cement-based mixture, with small amounts of short carbon fibers added to increase the conductivity and flexural toughness. The conductivity of the cement-based mixture for the electrolyte was found to be optimal at around 0.5% carbon fiber. Embedded within the mixture is a metal-coated carbon-fiber mesh—iron is used for the anode and nickel for the cathode. 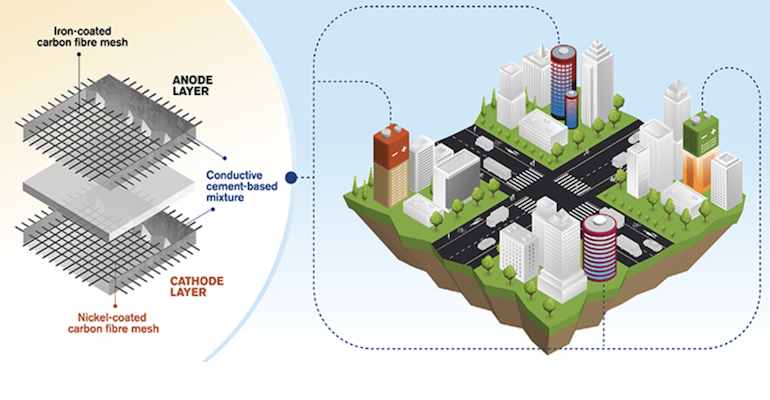 Rechargeable cement-based batteries could be the size of a building.

Out of the box

“Results from earlier studies investigating concrete battery technology showed very low performance, so we realized we had to think out of the box, to come up with another way to produce the electrode. This particular idea that we have developed – which is also rechargeable – has never been explored before. Now we have proof of concept at lab scale,” Emma Zhang, formerly at Chalmers explained in a University news release.

“We have a vision that in the future this technology could allow for whole sections of multi-story buildings made of functional concrete. Considering that any concrete surface could have a layer of this electrode embedded, we are talking about enormous volumes of functional concrete,” said Zhang.

Because the cement battery is rechargeable, the researchers see applications that could range from powering LEDs, providing 4G connections in remote areas, or cathodic protection against corrosion in concrete infrastructure. “It could also be coupled with solar cell panels, for example, to provide electricity and become the energy source for monitoring systems in highways or bridges, where sensors operated by a concrete battery could detect cracking or corrosion,” said Zhang.

It's an interesting idea, particularly as aside from new buildings, infrastructure in the US is long overdue for replacement and much of that is done using cement. “Since concrete infrastructure is usually built to last fifty or even a hundred years, the batteries would need to be refined to match this, or to be easier to exchange and recycle when their service life is over. For now, this offers a major challenge from a technical point of view,” said Zhang.