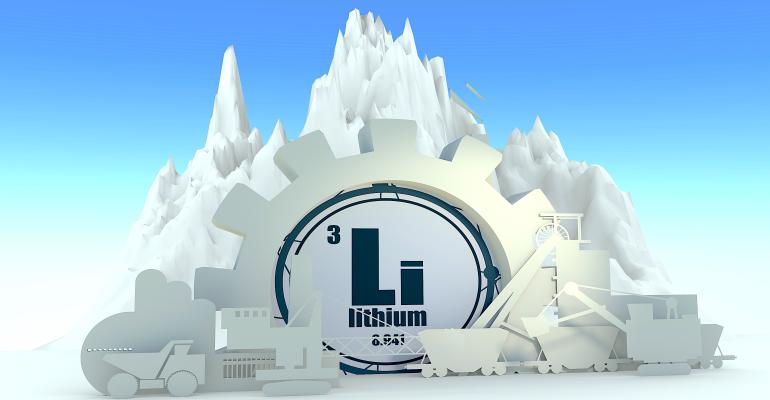 If you talk about electric vehicles (EVs) long enough, someone will eventually tell you that batteries can’t be recycled. The straw man argument most frequently expressed on social media is that electrification of transportation is bad for the environment because soon landfills around the world will be overbrimming with dangerous and toxic spent batteries. As with many “facts” delivered via handheld electronic devices by competing for special interests, much of what is said about EV battery recycling simply isn’t true.

Lithium-ion batteries pose a different recycling proposition. Unlike a lead-acid car battery, which is designed for easy replacement and weighs between 30-70 pounds, the lithium-ion battery pack in an EV can weigh between 500 and 1,000 pounds and is designed to remain in place for the lifetime of the vehicle. It isn’t a simple matter of disconnecting a positive and negative terminal and bringing an EV battery into your local auto parts store for a replacement. Each EV battery pack is specifically designed for the exact vehicle into which it is installed, and the chemistry of the individual cells may also be tailored to its application. 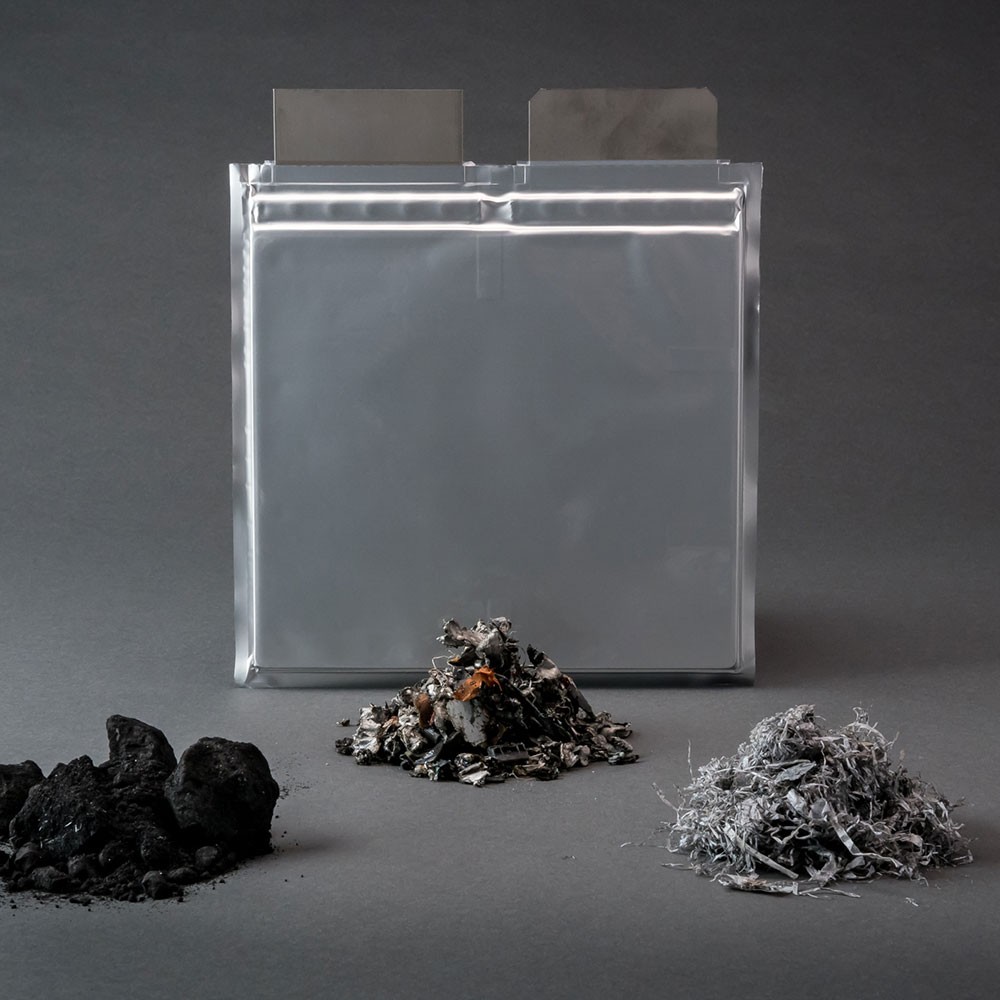 Recycling batteries from EVs won’t be easy, but the payoff promises to be big.

A lithium-ion battery is made up of three major components.  The cathode (positive electrode) is a metal oxide containing mostly nickel along with smaller amounts of metals such as cobalt, manganese, copper, and aluminum. Lithium iron phosphate (LFP) batteries replace the nickel metal oxides in the cathode with iron and phosphorous. The anode (negative electrode) is carbon graphite. The electrodes are separated by a liquid electrolyte which is typically an organic solvent. The electrodes and electrolyte are packaged in several ways. They can be built into a small cylindrical cell, a soft-sided pouch, or a prismatic cell with a hard-plastic casing.

The most valuable materials when recycling a lithium-ion battery are nickel and cobalt. These metals are expensive and, in the case of cobalt, somewhat scarce. Half of the world’s cobalt is sourced from the Democratic Republic of the Congo (DRC) in a politically unstable part of the world that has human rights concerns. Recycling them makes financial sense. Less valuable is lithium, particularly with the current slump in lithium raw material prices. But lithium still has value, and its price is expected to rebound as demand continues to grow. 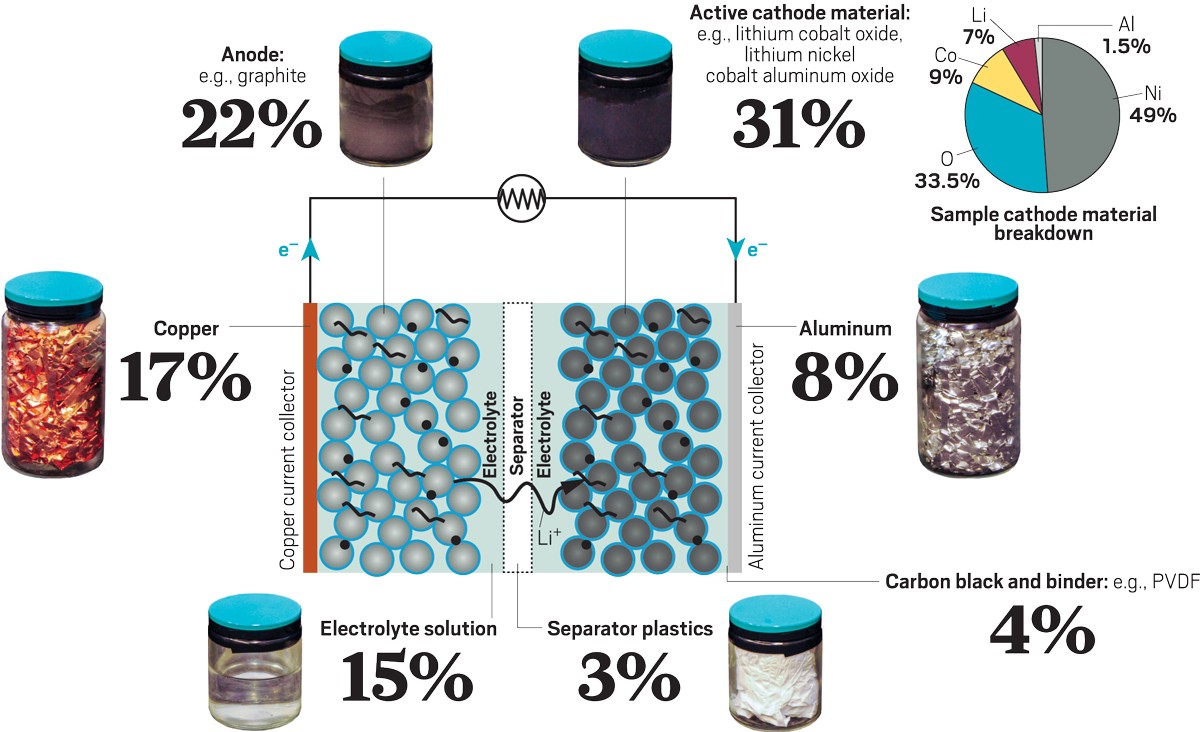 All the components of a Li-ion battery have value and can be recovered and reused. Currently, most recyclers recover just the metals. The pie chart describes a cathode material known as NCA, which is made of lithium nickel cobalt aluminum oxide.

But here is the rub—recycling has some real advantages over mining virgin ores for use in batteries. Mining is a form of gambling. Mining companies use explosives and fossil-fuel-powered heavy equipment to extract ore from the ground. They then crush the ore and subject it to powerful acids to pull out the desired metals, which must be further chemically treated and purified. The waste materials left behind must be separated from the acids and then stored indefinitely as tailings and spoils. The mining bet is that the ore will contain enough of the desired metals (usually in several hundred parts per million) to make the extraction process profitable.

Recycling, on the other hand, is a sure thing. The amount and quality of each of the desired metals are precisely known, based upon the feedstock of spent batteries that are being recycled. The concentrations of the materials in the feedstock is akin to that of a highly enriched ore. It may not be easy to extract the desirable materials from the battery cells, but the amount of return is easy to establish and, unlike mining, the profits don’t vary based upon the feedstock that is coming out of the ground.

Not that recycling lithium-ion batteries is particularly easy. Lithium-ion batteries are not designed to be disassembled and, as the need for higher energy density to create better vehicle range has increased, cells have become increasingly compact and are constructed in a variety of shapes and sizes. Battery packs also contain wiring (usually copper), sensors, and circuit boards that are part of battery management systems.

There are several accepted ways to recycle lithium-ion batteries. Pyrometallurgy facilities use a high-temperature melting-and-extraction, or smelting, a process that is similar to ones used in the mining industry. Furnaces run near 1,500 °C, recovering cobalt, nickel, and copper, but not lithium, aluminum, or any plastic and organic compounds, which burn away. It is an expensive process, in large part due to the need to treat the emission of toxic fluorine compounds released as gases during the burning of the electrolytes and plastic materials.

A chemical leaching process, called hydrometallurgy extracts and separates cathode metals below 100 °C and can also recover lithium and copper, and other transition metals. Hydrometallurgy is practiced commercially in China and is a less energy-intensive alternative with lower costs, but the need for caustic reagents such as hydrochloric, nitric, and sulfuric acids, and hydrogen peroxide, increasing environmental issues.

Early in 2019, the US Department of Energy (DOE) started its ReCell Advanced Battery Recycling Center, headquartered at Argonne National Laboratory. ReCell includes some 50 researchers based at six national laboratories and universities, and includes battery and automotive equipment manufacturers, materials suppliers, and other industry partners.

The ReCell team is investigating direct recycling methods for recovering and reusing battery materials without costly processing. One approach calls for removing the electrolyte by freezing it with supercritical carbon dioxide, then crushing the cell and separating the components physically. This can be done based on density differences. According to information from ReCell, “Direct recycling is the recovery, regeneration, and reuse of battery components directly without breaking down the chemical structure. By maintaining the process value in the original battery components, a lower-cost re-constituted material can be supplied to battery manufacturers. This will in turn help reduce the cost of EV batteries and drive up the value in recycling EV batteries.” The direct process also avoids acids and harsh reagents, making it more environmentally viable.

It’s important to remember that materials aren’t used up inside a battery. The recycled metals can be reused in a new battery without any reduction of quality or performance. The expensive battery materials for the cathode can even be supplied in a form that allows them to be used in new battery production with very little additional processing.

Planning for the Future

It will be necessary to include battery and vehicle manufacturers in the recycling process and might require some compromises in other areas of battery performance to allow easier recyclability. 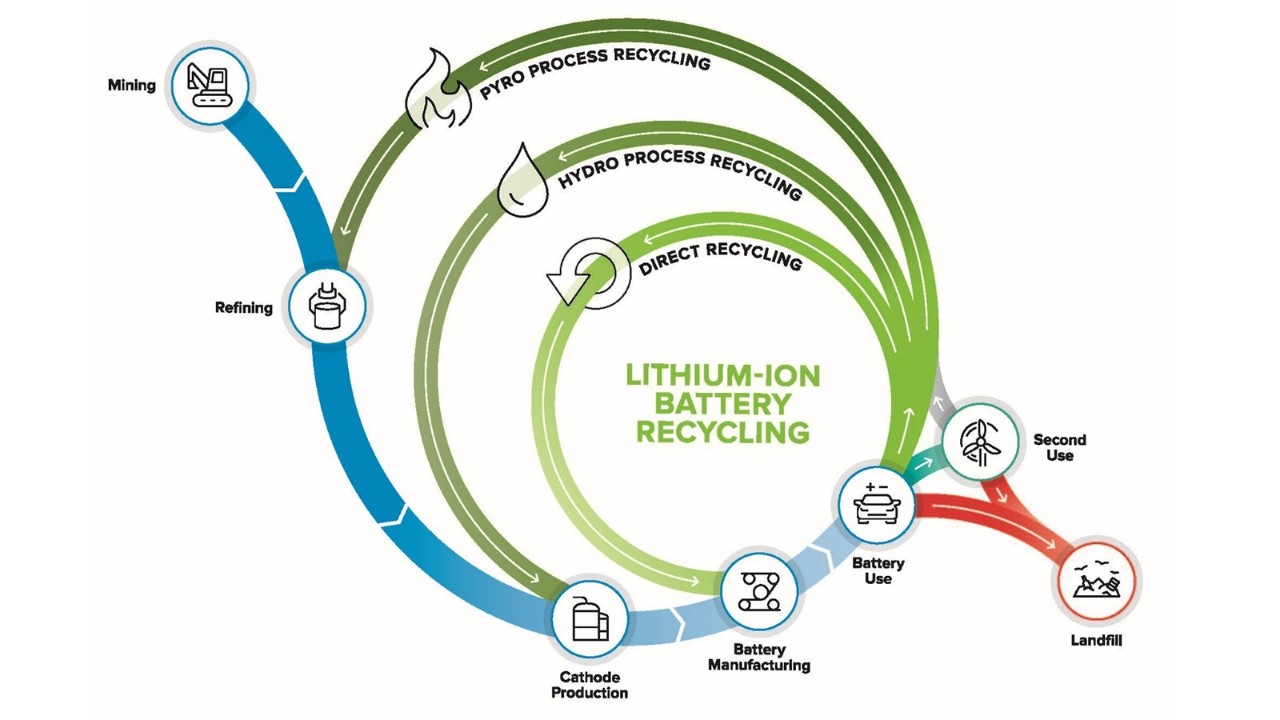 Direct recycling recovers cathode material instead of metal salts, offering the most potential for cost-effectiveness.

Carmakers are paying attention to the recycling problem. Tesla, for example presently uses a third party to recycle its lithium-ion batteries, and, at the recent Tesla Battery Day, the company announced it would eventually bring recycling in-house. Nissan and Sumitomo have already built an EV battery recycling plant in Japan that accepts Nissan Leaf EVs from all over the world for dismantling.

Investors have started to discover the potential in battery recycling. Former Tesla Chief Technology Officer JB Straubel has left day-to-day responsibilities at Tesla to run a company called Redwood Materials, whose goal is primarily battery recycling. Redwood has $40 million in funding from a $2 billion Amazon venture fund created to back companies with technology contributing to carbon reduction efforts. The company website says, “We at Redwood are planning ahead to address the problems and opportunities coming when millions of EV’s batteries need an end of life solution and when the electronics piled up in your drawers at home find a new life.”

In addition to interest from car companies and investors, adding some incentives through regulation would help move things along. As mentioned earlier, one key to the success of lead-acid battery recycling is the value place upon used batteries by a core charge that induces old batteries to be turned in for recycling when a new battery is purchased. The same idea could be applied to lithium-ion batteries, particularly those used in EVs, to help move the needle and ensure profitability and promote increased investment in recycling projects worldwide. Not only would the environmental concerns of batteries in landfills be averted, but recycling battery materials would also take some of the pressure off the need for more raw materials as electrification continues to grow in the coming decades.

The one certain thing is that the materials that make up a lithium-ion battery are far too valuable to end up in a landfill. Right now, EVs are slightly more than 1% of the car market. As the EV market continues to grow, and grid-scale lithium-ion battery packs find more industrial application, battery recycling will soon go far beyond startups and pilot plants. One more straw man argument that bites the dust.