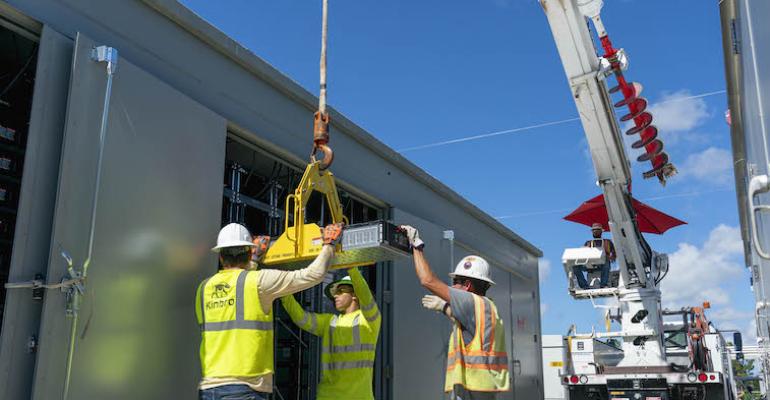 Florida Power and Light is building out a massive battery system to help implement practical solar power on the grid.

It makes sense that what will be the world’s largest solar power storage battery would be in Florida, the Sunshine State. Florida Power and Light Company ( FPL), the largest energy company in the US as measured by retail electricity produced and sold, has announced in a news release that it has installed the first of more than 50,000 battery modules that the company says will comprise the world’s largest solar-powered battery. The facility is now 75% finished with 100 of 132 total containers already installed.

The FPL Manatee Energy Storage Center is expected to have a 409-megawatt (MW) capacity, delivering 900 megawatt-hours (MWh) of energy – enough to power approximately 329,000 homes for more than two hours.

Related: Solar has Arrived! These Are the 12 Biggest Solar Power Plants in the World

“With more than 12 million solar panels installed and more than 40 solar energy centers in operation, FPL is building on its rapid solar expansion with the world’s largest solar-powered battery,” said FPL Vice President of Development Matt Valle, in the FPL release. “But that’s just the tip of the iceberg. FPL is implementing innovative battery storage projects across the state, transforming Florida’s transportation landscape with more than 1,000 EV chargers and partnering with universities and municipalities on battery systems that leverage cutting-edge microgrid technology.”