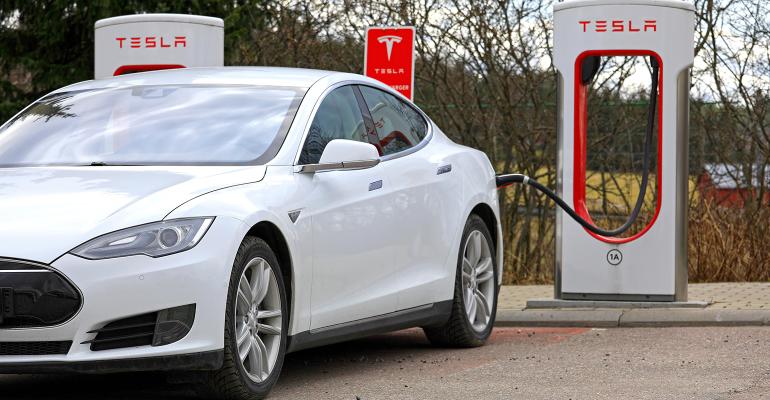 Although U.S. electric vehicle registrations remain dominated by Tesla, the brand is showing the expected signs of shedding market share as more entrants arrive. Much of Tesla's share loss is to EVs available in a more accessible MSRP range—below $50,000, where Tesla does not yet truly compete, according to a publicly released report by S&P Global Mobility.

Regardless of brand or price point, early S&P Global Mobility data suggests consumers moving to electric vehicles in 2022 are largely doing so from Toyota and Honda—brands which have been unable to keep their internal combustion owners loyal until their own brands begin to participate more significantly in the EV transition.

While both Japanese companies built a US legacy with phenomenal fuel economy and powertrain technologies—including electrification through hybrids, plug-in hybrids, and fuel-cell electric vehicles—both have been caught flat-footed in the context of 2022. S&P Global Mobility conquest data for Tesla's Model 3 and Y, Ford Mustang Mach-E, Hyundai Ioniq5, and Chevrolet Bolt show strong captures of buyers from the two leading Japanese brands. 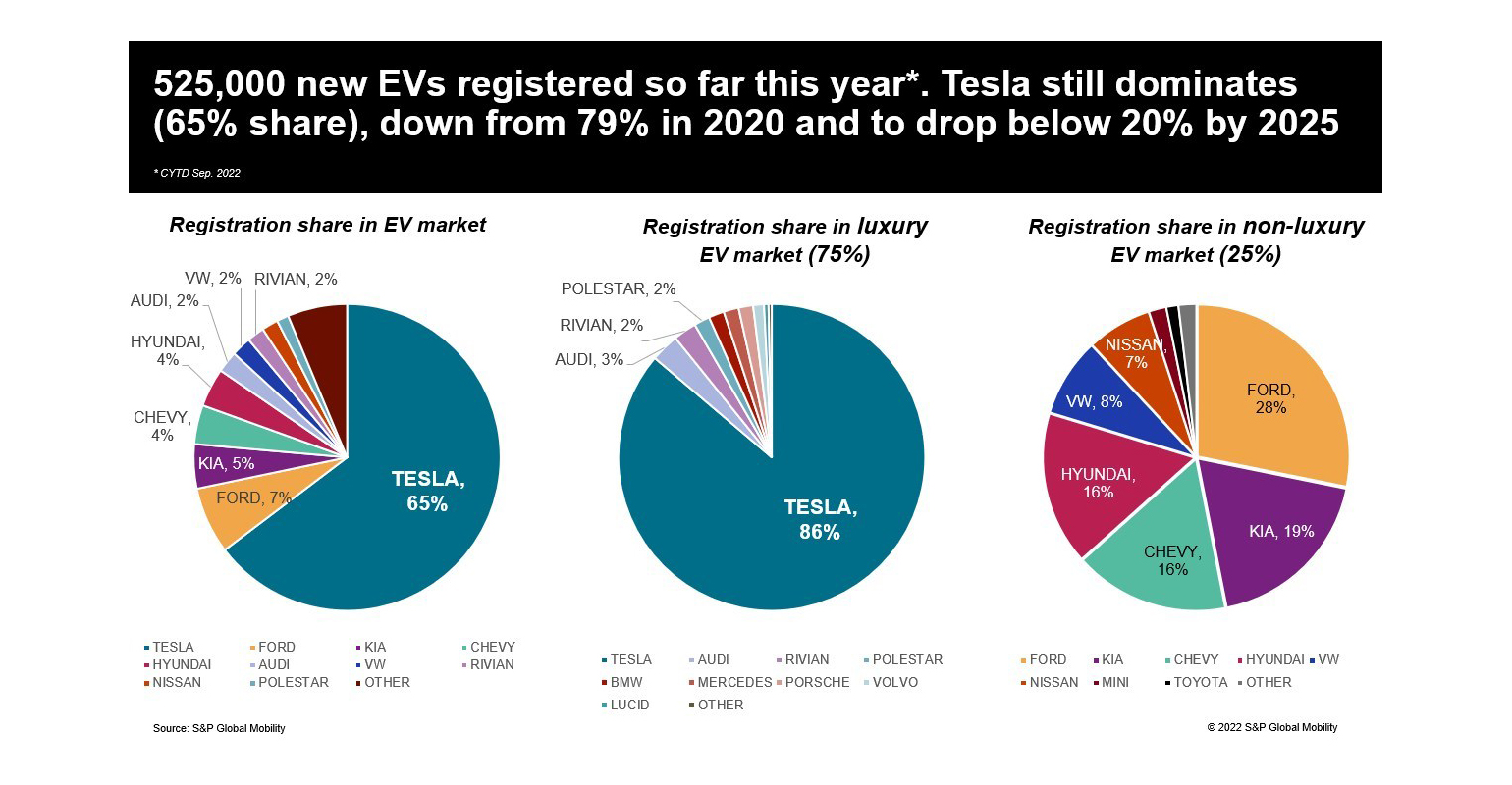 So far, most EVs continue to be acquired for higher MSRPs and by buyers with higher incomes than the demographic profile for total light vehicle registrations--in part because most EVs are Teslas.

Of more than 525,000 EVs registered over the first nine months of 2022, nearly 340,000 were Teslas. The remaining volume is divided, very unevenly, among 46 other nameplates. However, the trends may change as the number of EV buyers becomes more robust.

Tesla's position is changing as new, more affordable options arrive, offering equal or better technology and production build. Given that consumer choice and consumer interest in EVs are growing, Tesla's ability to retain a dominant market share will be challenged going forward.

S&P Global Mobility predicts the number of battery-electric nameplates will grow from 48 at present to 159 by the end of 2025, at a pace faster than Tesla will be able to add factories. Tesla's CEO Elon Musk confirmed (again) during a recent earnings call that the company is working on a vehicle priced lower than the Model 3, though market launch timing is unclear.

Tesla's model range is expected to grow to include Cybertruck in 2023 and eventually a Roadster, but largely the Tesla model lineup in 2025 will be the same models it offers today. (Tesla is also planning to deliver a commercial semi-truck by the end of 2022, but it would not be factored into light-vehicle registrations.)

“Before you feel too badly for Tesla, however, remember that the brand will continue to see unit sales grow, even as share declines,” stated Stephanie Brinley, associate director, AutoIntelligence for S&P Global Mobility. “The EV market in 2022 is a Tesla market, and it will continue to be, so long as its competitors are bound by production capacity.”

Tesla has opened two new assembly plants in 2022 and is looking for the site of its next North American plant. Tesla today is the brand best equipped for taking advantage of the immediate surge in EV demand, though manufacturing investments from other automakers will erode this advantage sooner than later.

The nascent stage of market growth leaves others competing for volume at the lower end of the price spectrum. New EVs from Hyundai, Kia and Volkswagen have joined Ford's Mustang Mach-E, Chevrolet Bolt (EV and EUV) and Nissan Leaf in the mainstream brand space. Meanwhile, luxury EVs from Mercedes-Benz, BMW, Audi, Polestar, Lucid, and Rivian—as well as big-ticket items like the Ford F-150 Lightning, GMC Hummer, and Chevrolet Silverado EV—will plague Tesla at the high end of the market.

With the Model Y and Model 3 combined taking 56% of EV registrations, the other 46 vehicles are competing for scraps until EVs cross the chasm into mainstream appeal. (A recent S&P Global Mobility analysis showed the Heartland states have yet to embrace electric vehicles.)

“Evaluating EV market performance requires looking through a lower-volume lens than with traditional ICE products,” Brinley stated. “But growth prospects for EV products are strong, investment is massive and the regulatory environment in the US and globally suggests that these are the solution for the future.”

Production volumes today are restricted by factory capacity, the semiconductor shortage and other supply chain challenges, as well as consumer demand. But the issue of production capacity is being addressed, as automakers, battery manufacturers and suppliers pour billions into that side of the equation. Though there are many signals suggesting consumer demand is high and that more buyers may be willing to make the transition—and to do so faster than anticipated even a year ago.

But consumer willingness to evolve to electrification remains the largest wildcard. Looking past Model Y and Model 3, no single model has achieved registrations above 30,000 units through the first three quarters of 2022. The second-best-selling EV brand in the US is Ford. However, Mach-E registrations of about 27,800 units are about 8% of the volume Tesla has captured, according to S&P Global Mobility data.

Tesla has four of the top five EV models by registration; in the sixth through 10th positions are the Chevrolet Bolt and Bolt EUV, Hyundai Ioniq5, Kia EV6, Volkswagen ID.4 and Nissan Leaf. Through September, the Bolt has seen about 21,600 vehicles registered, Hyundai and Kia are in the 17,000-18,000-unit range, and VW approached 11,000 units. Including the tenth-place Leaf, no other EV has had registrations above 10,000 units over the first nine months of 2022.

That said, there are caveats. Volkswagen's low volumes are affected by supply chain snarls and market allocations to more EV-friendly regions—issues Hyundai and Kia also face. However, VW's new ID.4 assembly line in Tennessee went live in October; the automaker said at the plant opening that it had 20,000 unfilled reservations and a plant capacity of 7,000 units per month.

That should change the EV volume picture significantly. A look at the roughly 525,000 EVs registered over the first nine months of 2022 shows the EV market today remains in the hands of affluent buyers, who are spending more on their vehicles than ICE buyers.

While logic dictates that further growth will require more EVs being offered in the $25,000-$40,000 price range, the willingness of buyers to spend more today reflects an aspirational nature to the choice.

Tesla's EV-only strategy gives it a retention advantage—as few EV owners have returned to ICE powertrains. But as new EVs arrive, loyalty will be tested. Currently, the Model Y has a 60.5% -brand loyalty and had nearly 74% of buyers come from outside the brand (the conquest rate)—tops in the industry. Who is Tesla conquesting from? Toyota, Honda, BMW and Mercedes-Benz. Toyota and Honda are only beginning to get into the EV market, though have yet to enter the fray in earnest. 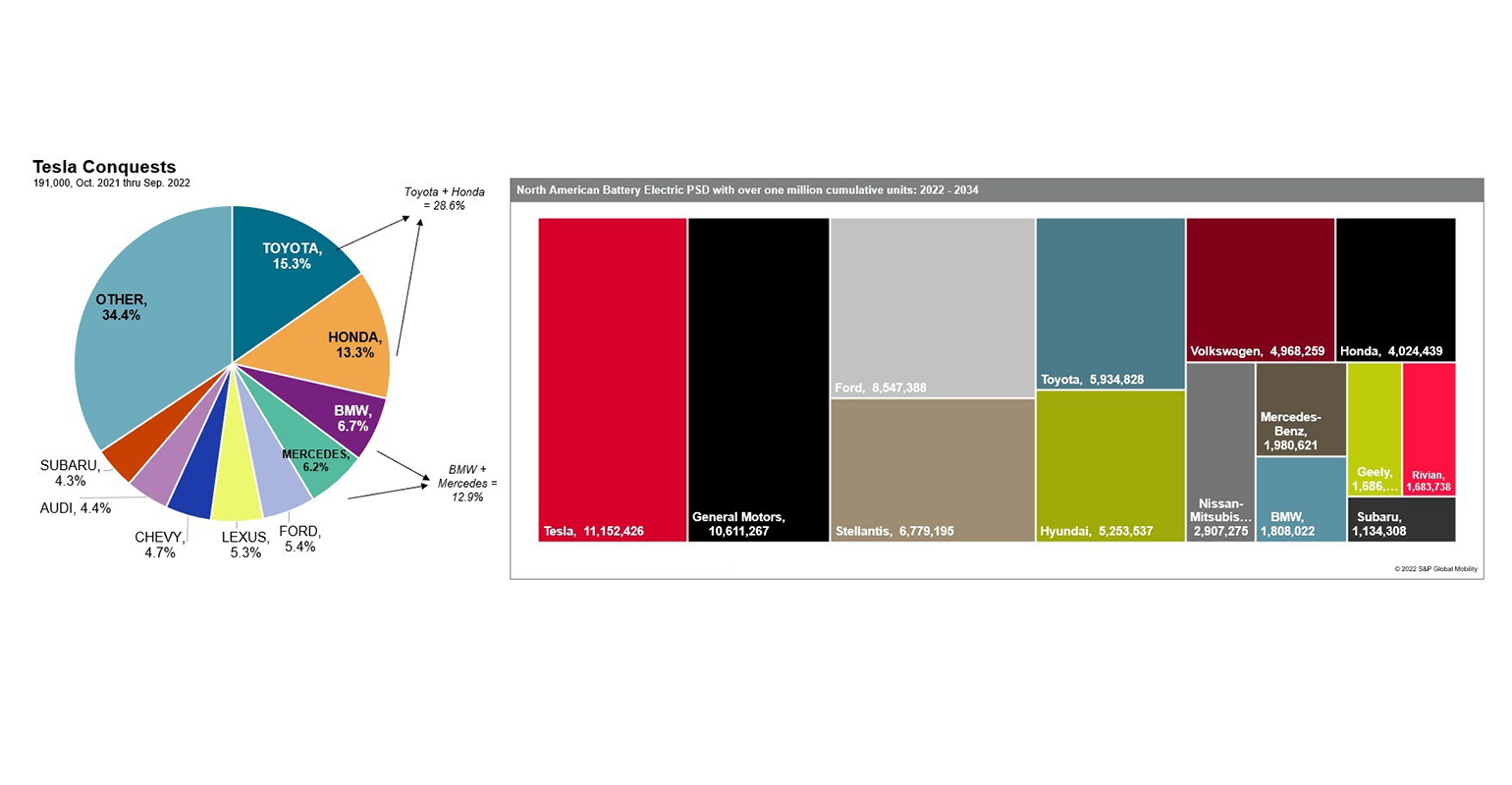 The race to market

Honda owners in particular are showing an interest in electric vehicles. Unfortunately for Honda, its first EV (a midsize SUV shared with GM) isn't expected until 2024, whereupon the second half of this decade sees a flurry of activity. That still presents the challenge of reconnecting with owners who have defected from the Honda brand.

In its meteoric growth, Tesla has conquered Japanese icons: The top five Model Y conquests are the Lexus RX, Honda CR-V, Toyota RAV4, Honda Odyssey, and Honda Accord. Meanwhile, the top five Model 3 conquests are the Honda Civic, Honda Accord, Toyota Camry, Toyota RAV4 and Honda CR-V. So even though the overall market has ditched sedans for SUVs, there remain some who prefer a sedan in electrified form.

But it's not just Tesla winning over consumers of the big two Japanese brands. Early data of the 27,800 registrations of the Ford Mustang Mach-E through September, shows similar conquest patterns: The top Mach-E conquest model has been the Toyota RAV4 (regardless of powertrain), followed by the Honda CR-V and Jeep Wrangler. The Mach-E is also experiencing registrations at a lower MSRP range—43% of registrations had an MSRP below $50,000. For Ford, more than 63% of registrations from January through September 2022 were conquests from other brands.

After the Mustang Mach-E, the next top EV is the Chevrolet Bolt (EUV and EV). The Bolt is likely to continue to gain ground, as it spent most of the fall and winter of 2021-22 in production hiatus as Chevrolet resolved a warranty issue, and then saw a price reduction soon after production re-started. With production back online, a more attractive price, and GM's plans to increase Bolt capacity in 2023, the vehicle has potential to keep growing. The Bolt also sees RAV4, CR-V and Prius as its top three conquest models.

And while the Hyundai Ioniq5 is limited in its geographic distribution (and faces similar capacity and global demand issues as VW ID.4), S&P Global Mobility conquest data show most Ioniq5 buyers previously owned a Toyota RAV4, Honda CR-V, Mazda CX-5 or Subaru Forester. Of the top 10 Ioniq5 conquests, only two are from the traditional Detroit Three brands, with the Chevrolet Bolt at seventh and Jeep Wrangler at tenth.

Of course, the high conquest rates from Toyota and Honda come from the historical sales success of those models overall. The RAV4 is the best-selling non-pickup truck in the US, which means there are more RAV4 buyers to conquest. The Camry, Accord, and CR-V follow close behind.

“Though today's EV buyers are not giving up their pickups in favor of going electric, it also suggests that there is a pool of EV owners, who are also full-size pickup owners, being created,” Brinley stated. “We know that EV owners tend to be loyal to EV propulsion. This intersection can provide support for EV pickup adoption.”

An existing pool of current EV owners who also have pickups can be a benefit for the efforts in the full-size EV pick-up space, particularly for the Ford F-150 Lightning, Chevrolet Silverado EV and GMC Sierra EV, each of which is aimed at a traditional pick-up use case and owner. The Rivian S1T, GMC Hummer EV and Tesla Cybertruck each occupy a lifestyle pickup space, geared toward innovator buyers and statement-makers, and could be more likely to conquest buyers to the pickup segment as well as to an EV purchase. But for now, electric vehicles remain the provenance of sedans and small SUVs.

NOTE: All loyalty data is based on the S&P Global Mobility household loyalty methodology, which may indicate an addition to the garage and not necessarily a disposal.

Battery Technology thanks S&P Global Mobility for enabling us to share this report.