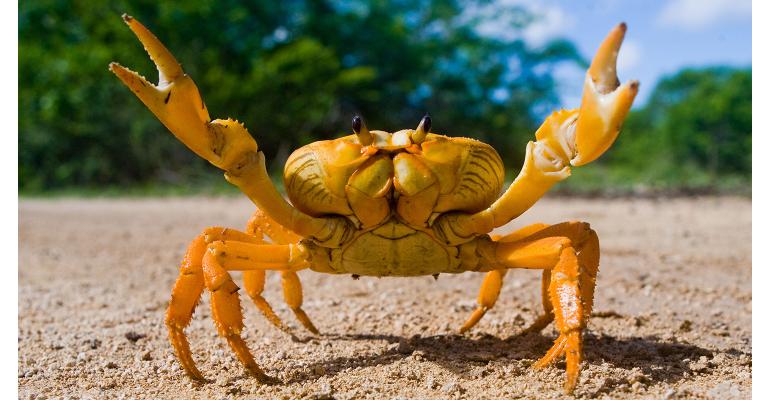 As part of a push to find more sustainable materials for batteries, researchers have created a zinc-based battery in which they've replaced the typically corrosive electrolyte material with a biodegradable one developed using a byproduct of the seafood industry—the shells of crabs, shrimp, and lobsters.

Researchers at the University of Maryland (UMD) developed the new device, which in tests demonstrated its suitability to store energy from alternative sources such as solar and wind, they said.

The need for more high-performance batteries for this and other types of advanced applications has spurred scientists to find new and creative ways to develop batteries that can provide the performance needs without using toxic materials.

For example, lithium-ion batteries on the market today widely use polypropylene and polycarbonate separators, which will take hundreds or thousands of years to degrade, noted materials science and engineering Professor Liangbing Hu, director of UMD’s Center for Materials Innovation.

“Vast quantities of batteries are being produced and consumed, raising the possibility of environmental problems,” he said.

The battery developed by the UMD team, in collaboration with scientists at the University of Houston, aims to help solving this problem by using two materials found naturally. In place of lithium or lead—the metal used in typical batteries today—they use zinc, which is more abundant in the earth's crust than lithium and creates safer and cleaner batteries, Hu said.

The other key material used in the device is chitosan as the electrolyte—which is the liquid, paste, or gel that a battery uses to shuttle ions back and forth between positively and negatively charged electrodes. Chitosan is found most abundantly in the exoskeletons of crustaceans--including crabs, shrimps, and lobsters—which means it can easily be obtained from waste from the seafood industry, Hu said.

Creating a biodegradable electrolyte from this material means that about two-thirds of the battery could be broken down by microbes; indeed, the chitosan electrolyte can decompose completely within five months, researchers said.

The battery also showed promise in terms of performance for another challenge the battery industry faces—how to store electricity from alternative sources like wind and solar for use in the traditional power grid.

In tests, the battery demonstrated an energy efficiency of 99.7 percent after 1,000 battery cycles, which shows it's suited to this purpose, researchers reported in a paper on their work published in the journal Matter.

Hu and his team plan to continue to work on this particular battery as well as other energy-storage devices that are more environmentally friendly not only in terms of the materials that comprise them, but also the manufacturing process that fabricates them.

“In the future, I hope all components in batteries are biodegradable,” he said. “Not only the material itself but also the fabrication process of biomaterials.”