Creating Order From Disorder in Batteries 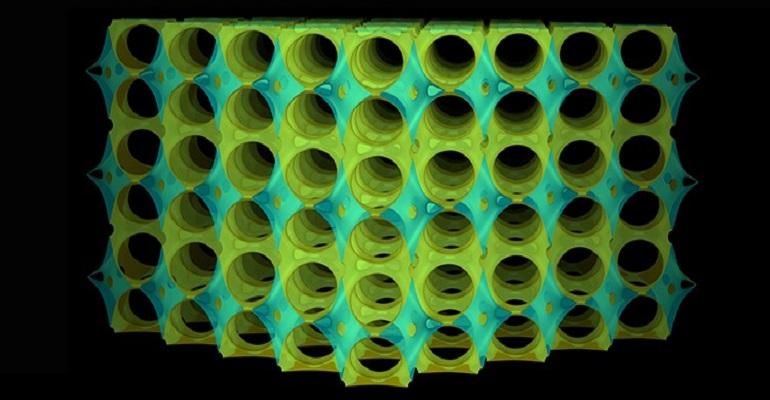 The graphic shows the three-dimensional surface of sodium ion diffusion in a hydroborate crystal. The material forms a disordered yet highly symmetrical structure that can allow sodium to be as mobile as lithium in commercial batteries.
Researchers demonstrate the transport of sodium ions in a device at efficiency on par with commercial lithium-based batteries.

Researchers in Switzerland have harnessed the power of disorder in chemistry to develop a sodium-based battery that they said is more stable than current lithium designs.

A team from the University of Geneva (UNIGE) tapped crystallography—which is a science that melds mineralogy, physics, and chemistry—to analyze and understand the structures of materials called hydroborates as well as predict their properties for use as an electrolyte in sodium-ion batteries.

Researchers applied this science to develop a non-flammable, solid electrolyte comprised of the material that can transport sodium ions in a way that’s on par with how lithium-based batteries transport lithium ions. The research paves the way for more powerful and stable batteries in which sodium replaces lithium, they said.

The basis of these improvements lie in the crystalline structure of the electrolyte, a hydroborate consisting of boron and hydrogen, researchers said. “Our [research] offers examples of structures that can be used to create and disrupt the hydroborates,” Fabrizio Murgia, a post-doctoral fellow in UNIGE’s Faculty of Sciences, said in a press statement.

This disruption is used in a favorable way to allow sodium ions to pass more easily around the battery’s electrolyte in the energy charge and discharge process.

Indeed, researchers have been working for some time to replace lithium-based batteries with other alternatives that use materials that are easier and less environmentally harmful to source. They also are seeking materials that don’t have the potential to catch fire, as the liquid electrolyte in lithium-ion batteries does.

The UNIGE team believes sodium, which is chemically similar to lithium but heavier, is a viable alternative. Other researchers also have been working to prove the use of the material in commercially viable battery designs.

“Lithium isn’t found everywhere on earth, and it creates geopolitical issues similar to those surrounding oil,” he explained in a press statement. “Sodium is a good candidate to replace it because it has chemical and physical properties close to lithium and is found everywhere.”

However, sodium has drawbacks to lithium in terms of its energy efficiencies because of its heavier weight, which is what the team solved with its use of crystallography as applied to the hydroborate electrolyte.

The structure of the hydroborates itself allows spheres of boron and negatively-charged hydrogen to emerge in spherical spaces that leave enough room for positively-charged sodium ions to pass through, explained Matteo Brighi, a post-doctoral fellow at UNIGE.

However, it’s the disorder in the structure of the material that researchers created that allowed for the negative and positive charges attract each other, creating a stable and efficient device, Brighi said.

In lab tests, the team successfully demonstrated the use of hydroborates as an electrolyte from room temperature to 250 degrees Celsius without any safety issues. The materials also showed the ability to store more energy than in lithium-ion designs.

Researchers published a paper on their work in the journal Cell Reports Physical Science, hoping it can be a toolkit for the manufacture of solid electrolytes for sodium-ion batteries.