Image courtesy of Marco A. Ruiz-Preciado, Karlsruhe Institute of Technology 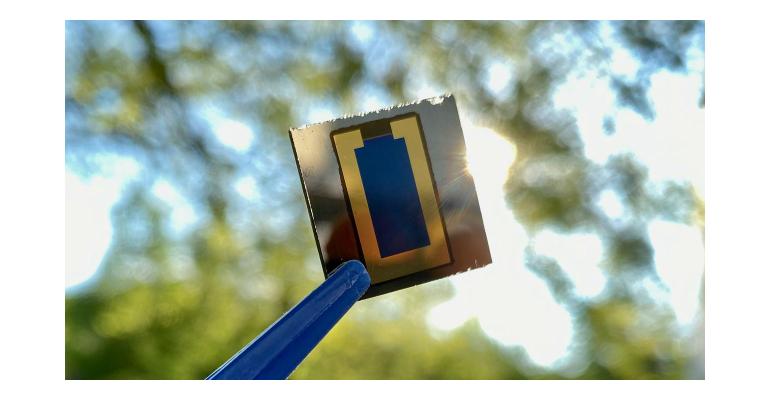 Researchers have used a combination of materials to create flexible tandem solar cells that can potentially be integrated into mobile technologies, such as smartphones, as well as for energy-harvesting window blinds or even awnings.

A team from the Karlsruhe Institute of Technology (KIT) in Germany developed perovskite/CIS tandem solar cells with an efficiency of nearly 25%, the highest reported efficiency so far for solar cells created with these materials, they said.

Indeed, researchers have known for a while now that more efficient solar cells can be increased by stacking two or more cells, particularly if each of the cells uses materials that are especially efficient at absorbing light from a different part of the solar spectrum. This can reduce inherent losses and boost efficiency, or the measure of how much of the incident light is converted into electricity, researchers said.

Perovskites, a broad class of crystalline materials that are used to make thin-film solar cells, have a versatility that makes them well-suited to tandem cells; in fact, when joined in tandem with silicon can reach an efficiency level of more than 29%. This is higher than either one can achieve individually, with current top efficiency at 25.7% for perovskites and 26.7% for silicon.

Rather than use silicon as a tandem partner, however, the KIT team—led by Marco Ruiz-Preciado and tenure-track professor Ulrich Paetzold from the Light Technology Institute (LTI) and the Institute of Microstructure Technology (IMT) at KIT—combined perovskite with copper-indium-diselenide (CIS). This material, along with copper-indium-gallium-diselenide (CIGS), has shown benefits in tandem cells that include the possibility to produce light and flexible tandem solar cells that can be installed not only on buildings but also on vehicles and portable equipment.

Moreover, perovskite-CIS tandem solar cells could even be folded or rolled up for storage and extended when needed, which paves the way for their use on blinds or awnings to provide shade and generate electricity at the same time, researchers said.

The KIT team succeeded in producing perovskite/CIS tandem solar cells with a maximum efficiency of 24.9%, or 23.5% certified, they reported in a paper on their work in the journal ACS Energy Letters.

“This is the highest reported efficiency for this technology and the first high efficiency level reached at all with a nearly gallium-free copper-indium diselenide solar cell in a tandem,” noted Ruiz-Preciado in a press statement.

The key to producing such a highly efficient cell was to reduce the amount of gallium, which resulted in a narrow band gap of approximately one electron volt (eV), researchers said. This is very close to the ideal value of 0.96 eV for the lower solar cell in a tandem, which in this case is the perovskite cell, they reported.

Band gap is a material characteristic that determines the part of the solar spectrum that a solar cell can absorb to generate electricity. In a monolithic tandem solar cell, the band gaps must be such that the two cells can produce similar currents to achieve maximum efficiency. If the lower cell’s band gap changes, the upper cell’s band gap has to be adjusted to the change, and vice versa.

To adjust the band gap for efficient tandem integration, researchers typically use perovskites with high bromine content, researchers said. However, this can lead to the cells experiencing voltage drops and phase instability, they said.

The scientists from KIT used CIS solar cells remedied the potential issues with a narrow band gap at the base of the tandem cells that they developed, they said. This allowed them to produce the upper cells using perovskites with low bromine content, researchers reported, resulting in cells that are more stable and efficient.

The study not only demonstrates the potential of perovskite/CIS tandem solar cells, but also “establishes the foundation for future development to make further improvements in their efficiency,” Paetzold said in a press statement.

Researchers partnered with the European Union’s PERCISTAND project and the Netherlands Organization for Applied Scientific Research. A previous EU project called CAPITANO and funded by Germany’s Federal Ministry for Economic Affairs and Climate Action (BMWK) also laid the groundwork for their recent work, they added.