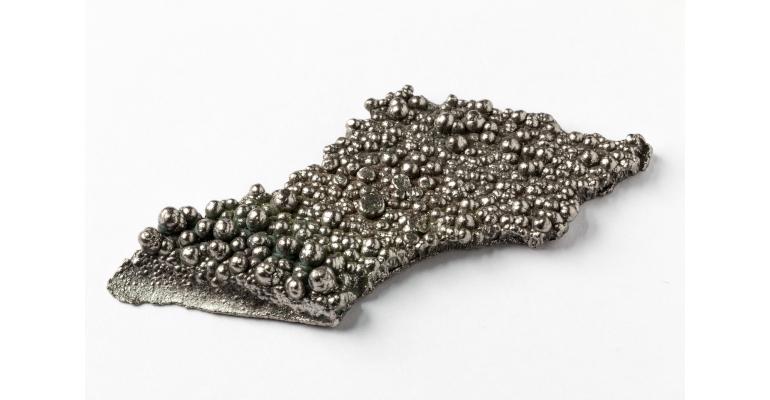 Macrophotograph of a sample of high purity 99, 8% electrolytic cobalt metal.
The cobalt-detecting technology could have financial, environmental, and geopolitical implications.

NETL researchers have devised a compact, portable device that can be used to detect cobalt at low concentrations in liquids, including process streams from U.S. coal byproducts. These byproducts include fly ash, bottom ash, boiler slag, flue gas, desulfurization sludge, and fluidized bed combustion ash. The new system may have financial, environmental, and geopolitical implications for recovering the element with U.S. resources.

NETL cited data from The Cobalt Institute, which reports that cobalt demand is accelerating with the increasing use of electric vehicles because their lithium-ion batteries use the element in their cathodes to prevent overheating or catching fire. The vehicles consumed 59,000 tons, or 34% of the global total in 2021. And cobalt demand will continue rising rapidly as the electric vehicle transition progresses, the institute predicts, estimating that 70% of coming growth will be from the electric vehicle sector.

The Cobalt Institute believes that cobalt will be one of the main objects of geopolitical competition in a world running on renewable energy and dependent on batteries. Being able to use U.S. coal byproducts as a source for cobalt could put the nation in a better position to deal with that geopolitical competition. Currently, about 74% of mined cobalt supply comes from the Democratic Republic of Congo, with 72% of the total production being refined in China. Both countries have faced accusations of environmental and human rights abuses associated with cobalt mining, according to NETL's press release.

Coal byproducts can be a source for cobalt, but they are present in low concentrations, which makes it difficult to detect during processing. And analyses of the process streams are expensive because this traditionally requires the use of an inductively coupled plasma mass spectrometer. These devices can cost up to $100,000 and are also too big to take outside of the laboratory, NETL explained.

For a potential alternative, NETL researchers Scott Crawford, Ki-Joong Kim, and John Baltrus created a rapid, inexpensive, and portable characterization technique that can reduce production costs associated with cobalt process monitoring. This will better enable the use of coal byproducts as a source for cobalt, according to NETL. The NETL system uses carbon dots that are co-doped with phosphorus and nitrogen-containing molecules as the sensing materials. Carbon dots are carbon nanoparticles that are less than 10 nm in size and can be derived from coal. Given their physical and chemical properties, carbon dots are used in a wide range of applications from drug delivery, explosive detection, and chemical sensing to food safety, bioimaging, and energy conversion.

“The portable system responds nearly instantly to the presence of cobalt with detection performance comparable to a commercial fluorescence spectrometer at significantly lower costs,” Crawford explained in the release.

Kim added that the NETL sensor “is selective for cobalt in the presence of 13 of the most common metal ions encountered in coal byproducts. It was tested by detecting cobalt when spiked into an acid mine drainage leachate sample. That highlights the sensor’s potential for real-world deployment in challenging environments.”

The team expanded on the potential for another product—a test strip sensor that uses a handheld ultraviolet lamp to elicit a selective and sensitive visual response to cobalt.  “Taken together, these sensing systems represent a significant step forward in the development of low-cost practical sensors for high-value metals in complex streams,” Baltrus concluded.