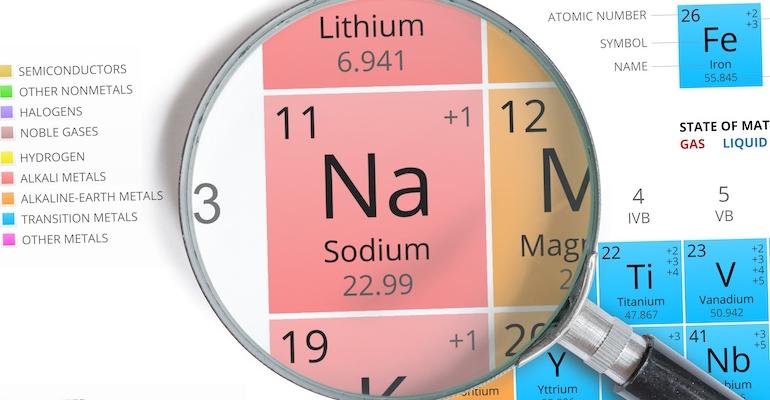 A lower-cost alternative to lithium-ion batteries might be possible using an anode-free sodium-ion design.

About a quarter of the cost of a cell phone or electric vehicle (EV) comes from the battery. In addition to their significant mass, the components that make up a lithium-ion battery—the anode (negative electrode), the cathode (positive electrode), and the electrolyte—are made from expensive materials like nickel, cobalt, lithium, and highly specialized carbon graphite.

A great deal of effort is underway to reduce the costs of batteries. One major goal is to bring the cost of an EV to parity with that of an internal combustion engine (ICE) vehicle to increase the pace of electrification of the transportation system.

Related: Electric Vehicles Could Operate on Cheap Batteries Made with Salt

Lithium-ion Batteries Are Not Cheap

In a commercial lithium-ion battery, lithium ions are stored in a graphite anode during charging and are released and travel through the electrolyte to the cathode when the battery is discharging. While the lithium ions travel from the anode to the cathode, free electrons travel through the current collector and are available to provide electrical power. The graphite used in the anode is of a special type that is both expensive and also is currently available almost exclusively from China.

One way to reduce the cost of batteries is to replace the costly lithium with an element that is less expensive and more Earth-abundant. Sodium is often mentioned as a possible candidate. At the Washington University in St. Louis lab of Peng Bai, assistant professor in the Department of Energy, Environmental & Chemical Engineering in the McKelvey School of Engineering, they are examining sodium as a replacement for lithium. The twist is that they are doing it without a traditional anode. “We used old chemistry,” Bai said in a Wash U news release. “But the problem has been, with this well-known chemistry, no one ever showed this anode-free battery can have a reasonable lifetime. They always fail very quickly or have a very low capacity or require special processing of the current collector.”

Bai replaced the traditional graphite anode with a thin layer of copper foil. Instead of being inserted into the graphite during charging, the charge-carrying ions plate themselves onto the copper. When the battery is discharged, they dissolve back into the electrolyte as ions and travel back to the cathode.

The problem with anode-free batteries is that the plating of the charge-carrying ions can become unstable, creating needle-like dendrite metal crystals. These dendrites can grow large enough to reach the cathode and cause the battery to short. Most often this has been attributed to the high reactivity of alkali metals like sodium.

“In our discovery, there are no dendrites, no finger-like structures,” said Bingyuan Ma, a doctoral student in Bai’s lab. The team noted that the deposited sodium is smooth, with a metallic luster. “This kind of growth mode has never been observed for this kind of alkali metal.”

When the team says “observed” they literally mean it. Bai’s team has developed a transparent capillary cell that offers a way to look into the battery as it operates. Ordinarily, researchers can only see into the battery by opening it up after it fails. “All of the battery’s instabilities accumulate during the working process,” Bai said. ”What really matters is instability during the dynamic process, and there’s no method to characterize that.” Watching Ma’s anode-free capillary cell, “We could clearly see that if you don’t have good quality control of your electrolyte, you’ll see various instabilities,” including the formation of dendrites, Bai said.

Water Is The Key

Using the transparent cell, the team made the startling discovery that the dendrite formation comes down to how much water is in the electrolyte. “We went back to check the capillary cells and realized there was a longer drying process of the electrolyte,” Bai said. Water content in the battery electrolyte had been noted before, but its significance was not appreciated. Because alkali metals react with water, the research team wanted to bring the water content down. “We were hoping just to see a good performance,” Bai said. But by watching the battery in action, the researchers realized that the shiny, smooth deposits of sodium that they were seeing would help to eliminate the irregularities that can lead to the growth of dendrites. The amount of water was key. “Water content must be lower than 10 parts-per-million,” Bai said.

Armed with this information, Bai’s team was able to go beyond their capillary cell and build a working battery with similar performance to a standard lithium-ion battery, but that takes up much less space because of the lack of an anode. “We’ve found that the minimal is maximum,” Bai said. “No anode is the best anode.”