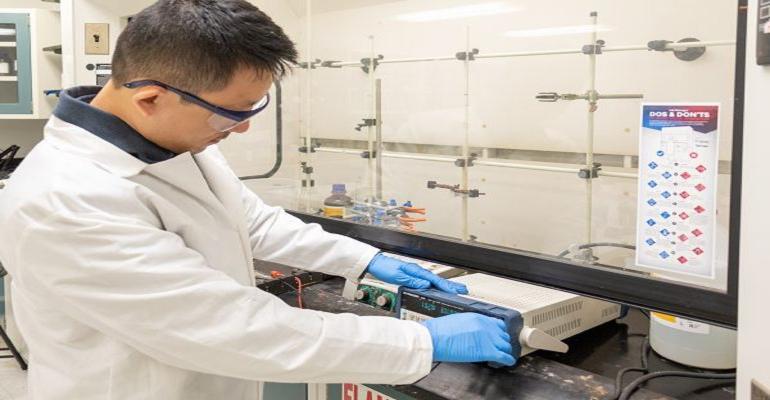 UCF nanoscience assistant professor Yang Yang has built on his experience improving batteries to create a new thin-film coating for anodes to help them avoid the degradation that can lead to battery failure.
New materials for designing the anode of lithium-ion batteries show less degradation over time.

Anyone who has a smartphone knows that, over time, the device’s battery starts to lose its ability to store energy. This is because of the degradation of materials and elements inside the battery that can shorten its lifespan.

A researcher at the University of Central Florida aims to solve this problem by focusing on providing more structural stability for a next-generation material being eyed for use as an anode, one of the two electrodes found in lithium-ion batteries.

Yang Yang, an assistant professor in UCF’s NanoScience Technology Center, developed a thin-film coating comprised of copper and tin, which can help keep an anode made from metallic tin from degrading over time. The anode is the electrode that generates electrons that travel to the cathode to create an electric current and power for the device.

Yang’s coating is an alternative to the coating typically used to protect the anode in a lithium-ion battery, one that shows the potential for better protection.

“Our work has shown that the rate of degradation of the anode can be reduced by more than 1,000 percent by using a copper-tin film compared to a tin film that is often used,” Yang said in a press statement.

Yang has been working with battery technology for some time to improve specific characteristics of the energy-storage devices. His previous work has focused on making them safer as well as able to withstand extreme temperatures.

The latest research builds on this experience and turns its attention to the anode, which has been problematic in lithium-ion designs because its degradation often is what leads to dangerous scenarios such as battery explosions or fires.

These problems with batteries typically stem from the use of graphite to comprise the battery anode. Yang’s team worked with a metallic tin anode to test its viability as an alternative for next-generation lithium-ion batteries.

Metallic tin has a high theoretical capacity and electrical conductivity, which means it could help improve the lifetime of future battery designs if it can be optimized for anode use, researchers said.

One problem with metallic tin, however, is that it tends to degrade even faster than graphite thanks to “large volume changes during lithiation/delithiation, which leads to a rapid capacity decay,” Yang wrote in an abstract for a paper published on their work in the journal Advanced Materials.

In tests, Yang’s team demonstrated that the copper-tin alloy coating stabilized the metallic tin anode, which shows promising results for its use in next-generation battery design. The technology also can scale for use in the smallest smartphone battery to accommodate larger batteries that power electric vehicles.