Ionic MT’s Ionisil nano-silicon material is derived from halloysite, which comes out of the ground with a 100% naturally-occurring nanotube structure (pictured) and silicon-oxide shell. A simple, cost-effective process transforms this mineral feedstock into a drop-in material for anodes.
Ionic MT's process to simplify the production of nano-silicon can help deliver longer-range, faster-charging EVs.

A startup company has a mass-manufacturing strategy for the development of a silicon-based, drop-in replacement for the graphite typically used in commercial lithium-ion energy-storage devices. The company, Ionic Mineral Technologies (Ionic MT), says it aims to use the material to deliver longer-range and faster-charging batteries.

Ionic MT recently emerged from stealth mode, during which it had been developing a halloysite-derived, nano-silicon that it has branded ‘Ionisil.’ This material can be used instead of graphite to produce the anode—or positively charged electrode—of EV batteries to drive significant improvements over current technology, the company said.

The anode is an integral part of a lithium-ion battery that stores and releases lithium ions during charging and recharging. While graphite is currently the most widely used material for this purpose, scientists have been seeking new and better materials that can provide more energy density and charge faster—two particular needs of EV batteries.

Non-silicon is a material that's well-suited to meet these challenges, as it has a charge capacity 10 times greater than graphite, according to scientists. Moreover, batteries made using silicon anodes can charge to 80% capacity in five minutes. Comparatively, batteries that use graphite as an anode take around 40 minutes or more to reach 80%.

The drawback to using nano-silicon for this purpose has been that to produce it synthetically in the volumes needed for EV battery production is a complex process that uses Silane gas feedstock and requires expensive, specialized equipment, Andre Zeitoun, founder and CEO of Ionic MT explained.

Ionic MT aims to solve the problem of sourcing nano-silicon for battery manufacturing through a novel production process that uses as its basic material halloysite, an aluminum silicate clay with a naturally occurring nanotubular structure.

The process the company uses has three key steps. Using conventional industrial equipment, acid is used to etch away alumina from halloysite, which is then filtered to create silicon feedstock from pure silicon oxide nanotubes. This process also creates as a byproduct precipitated alumina gel.

This resulting material then goes through Ionic MT's “top-down” process, which converts the silicon oxide powder to silicon metal powder, maintaining its nano-structure. The third step uses conventional industrial equipment to scale the nano-metal up to tens of thousands of tons to address the demand for nano-silicon in EV batteries.

“Halloysite-derived nano-silicon is a game-changer for the industry,” noted Zeitoun at the North American Battery Show.

He said Ionic MT is the first to leverage this natural resource specifically to the EV supply chain to help improve current battery technology. “With our approach, scalability is our advantage,” Zeitoun said. 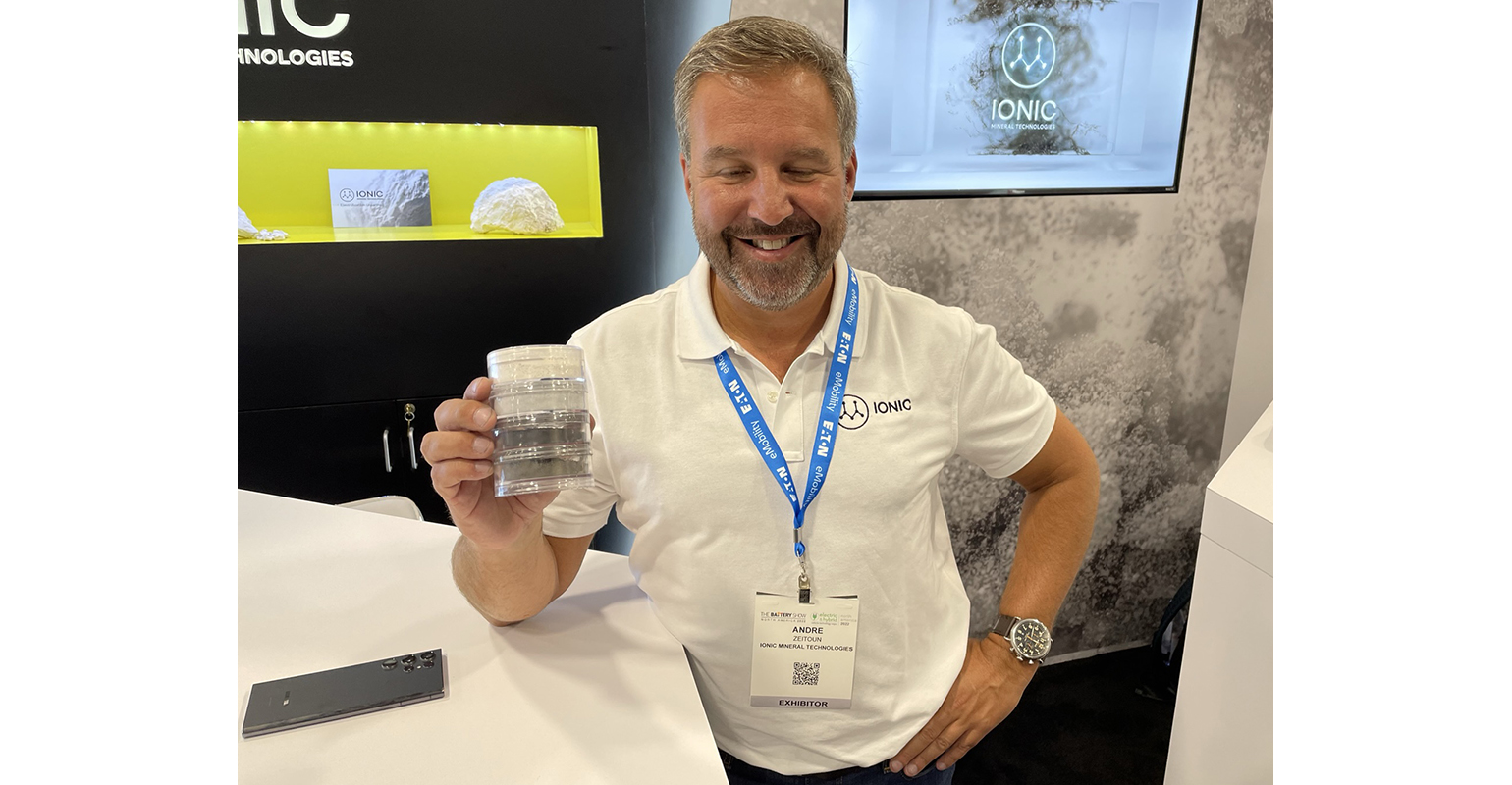 Leveraging Ionisil to create anodes for EV batteries can help manufacturers develop EVs with batteries that charge faster and with a longer driving range between charges. This would help evolve the technology to where its capabilities are more comparable with conventional internal combustion engine-powered automobiles and thus more attractive to consumers.

Ionic MT has taken its product to market just after the recent passage into law of the U.S. Inflation Reduction Act (IRA), which provides a tax credit for EVs that hinges on domestically-produced battery minerals—which until now has been a largely non-existent supply chain, according to Zeitoun.

Ionic MT is aimed at addressing this “Achilles heel” of the legislation and supply U.S.-sourced battery minerals and materials, Zeitoun said. The company is now positioned to be the leading domestic supplier of nano-silicon for the EV manufacturing sector.