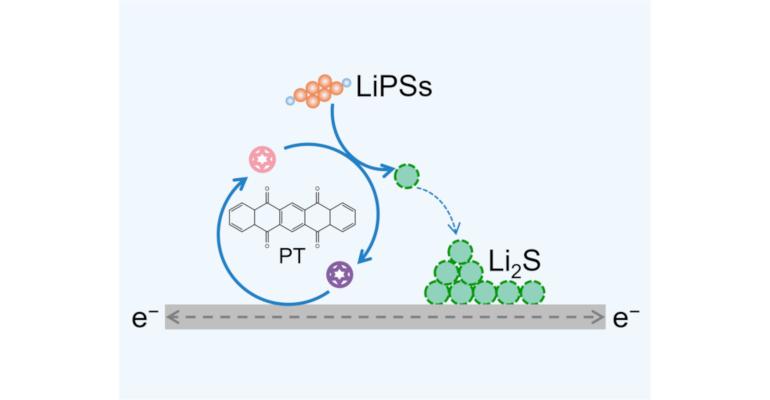 Scientists created an effective redox mediator to promote the sulfur redox kinetics under practical working conditions to improve the performance of lithium-sulfur batteries and bring them closer to their theoretical potential.
Bolstering the sluggish oxidation-reduction (redox) reaction in these devices could make them a viable alternative to current designs.

Researchers have found a solution to improve a key reaction in lithium-sulfur batteries to bolster their performance. The work could solve one of the key issues with this potential replacement for lithium-ion designs, especially in applications that require high energy density, they said.

A team of scientists from two Chinese universities developed a strategy to improve what’s currently a sluggish oxidation-reduction (redox) reaction in lithium-sulfur batteries. This reaction is part of the conversion process that turns the chemical energy to electrical energy in the battery.

This characteristic has been preventing the technology from reaching its potential for theoretical energy density—which is far greater than that of lithium-ion batteries--and thus being on par performance-wise with the currently used battery chemistries, researchers said.

Indeed, though lithium-ion batteries have served the energy-storage needs of popular devices and electric vehicles for about three decades, they are approaching their theoretical energy density limit and cannot keep pace with the demands of high-energy-density energy storage devices.

This is why scientists—like the Chinese team from the Beijing Institute of Technology and Tsinghua University—are aiming to discover and optimize other battery chemistries to take on new energy demands.

With their ultra-high theoretical energy density of 2600 Watt hours per kilogram, lithium-sulfur batteries could be that alternative to lithium-ion batteries for which scientists are seeking.

Aside from this aspect, the batteries are an attractive chemistry for scientists because sulfur—the active material in the device’s cathode—is naturally abundant, which means it’s also environmentally friendly and low-cost, researchers said.

The sluggish redox reaction is no small hurdle, however. That’s because the high theoretical energy density in lithium–sulfur batteries originates from the reactions between the sulfur cathode and the lithium anode, , researchers said.

The sluggishness occurs specifically during the discharge process--when the sulfur is reduced into dissolved lithium polysulfides and then to solid lithium sulfide, thus converting chemical energy to electrical energy. Researchers believe this problem would be exacerbated if the device was put under stress, such as conditions that energy-dense applications require, they said.

To solve the problem, researchers designed a variety of promoters—either sulfur hosts or interlayer materials in the lithium-sulfur batteries—to promote the battery’s kinetics and thus improve its reactions. Still, they are not enough to prevent the gradual declination of battery performance due to  solid lithium sulfide deposits that accumulate on the electrocatalytic active sites, researchers found.

Through further investigation, the team discovered that soluble redox mediators are effective in promoting the kinetics by chemically reducing or oxidizing the lithium polysulfides and then regenerating at the surface of the electrode.

Initially, they proved that using these redox mediators is an effective mechanism for dealing with the sluggish kinetics specifically in coin or button cell batteries--the small, flat batteries used in devices such as hearing aids, car keys, or medical implants.

The next step was to find a a redox mediator that worked in pouch-cell lithium batteries, which can be used in higher-power applications, such as military and automotive applications. To achieve this, researchers designed a redox mediator using an organic molecule called 5,7,12,14-pentacenetetrone, or PT, to promote the sulfur redox kinetics in high-energy-density lithium–sulfur pouch cells, they said.

“Concretely, the PT redox mediator provides a chemical bypass for the reduction of lithium polysulfide to lithium sulfide, thus reducing the reaction resistance and improving the deposition capacity,” explained Bo-Quan Li, an academic researcher at the Beijing Institute of Technology, in a press statement.

Researchers published a paper on their work in the journal Nano Research.

Proving that they could find a way to improve the redox reaction in a high-energy-density battery brings scientists a step closer to developing lithium-sulfur batteries that can meet their theoretical potential for heavy-duty applications, researchers said.

They now aim to develop more advanced redox mediators with the ultimate goal of realizing “ high-energy-density and long-cycling lithium–sulfur batteries with low costs and high safety” for applications such as aerial vehicles including spacecraft, Li said in a press statement.

Beyond Lithium: 10 Batteries Based on Surprising Substances
Aug 09, 2022