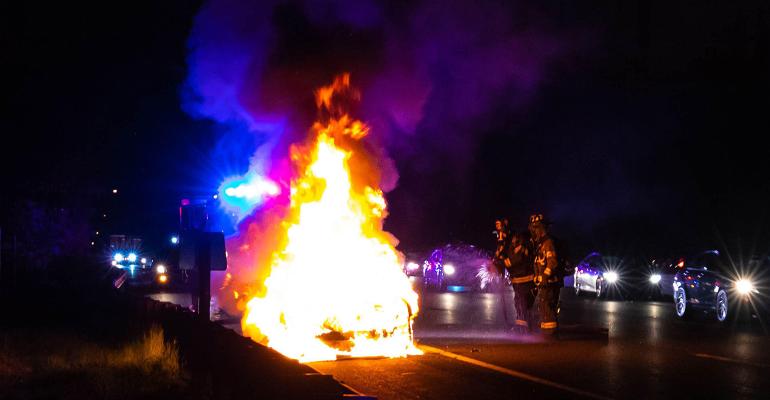 Thermal runaway can spread from one battery cell to the next, resulting in a very large, hard-to-fight fire. A new technology may stop a fire from ever starting.
Shape-memory ability shuts down the Li-ion battery when it gets too hot but before a fire can start.

When overheated, Lithium-ion (Li-ion) batteries are prone to catching fire or even exploding. But recent research published in the American Chemical Society (ACS) Nano Letters publication offers a possible solution with a new technology that can swiftly shut down a Li-ion battery when it gets too hot. And unlike other solutions, it doesn’t negatively impact battery performance the rest of the time.

The chemistry found in many batteries is essentially the same: Electrons are shuttled through an electronic device in a circuit from one electrode in the battery to another. But in a Li-ion cell, the electrolyte liquid that separates these electrodes can evaporate when it overheats, causing a short circuit. In certain cases, short circuiting can lead to thermal runaway, a process in which a cell heats itself uncontrollably. When multiple Li-ion cells are chained together—such as in electric vehicles—thermal runaway can spread from one unit to the next, resulting in a very large, hard-to-fight fire.

To prevent this, some batteries now have fail-safe features, such as external vents, temperature sensors, or flame-retardant electrolytes. But these measures often either kick in too late or harm performance. So, Yapei Wang, Kai Liu and their colleagues wanted to create a Li-ion battery that could shut itself down quickly, but also work just as well as existing technologies.

The researchers used a thermally responsive shape memory polymer covered with a conductive copper spray to create a material that would transmit electrons most of the time, but switch to being an insulator when heated excessively. At around 197 degrees F, a microscopic 3D pattern programmed into the polymer appears, breaking apart the copper layer and stopping the flow of electrons. This permanently shuts down the cell but prevents a potential fire.

At that elevated temperature, traditional cells keep running, putting them at risk of thermal runaway if they became hot again. Under regular operating temperatures, the battery with the new polymer maintains a high conductivity, low resistivity, and similar cycling lifetime to a traditional battery cell. The researchers say that this technology could make Li-ion batteries safer without having to sacrifice their performance.

The American Chemical Society (ACS) is a nonprofit organization chartered by the U.S. Congress. ACS’ mission is to advance the broader chemistry enterprise and its practitioners for the benefit of Earth and all its people. It promotes excellence in science education and providing access to chemistry-related information and research through its multiple research solutions, peer-reviewed journals, scientific conferences, eBooks, and weekly news periodical Chemical & Engineering News.