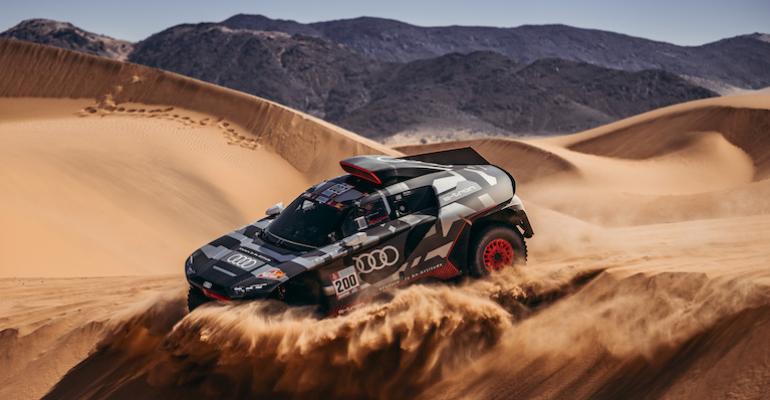 The debut of Audi’s hybrid-electric desert racers lives up to expectations with four stage wins and all three vehicles finishing the world’s toughest automotive event.

The Dakar Rally is considered to be one of the world’s toughest automotive events. For two weeks, competitors on motorcycles, quad bikes, buggy’s, specialized desert racing machines, and even heavy-duty trucks travel thousands of miles across some of the most inhospitable desert terrain on the planet. Not everyone finishes this grueling event and occasionally some competitors tragically lose their lives during the race.

2022 was the 44th running of the Dakar Rally which took place entirely with Saudi Arabia in January. Among the 550+ entries that took the start were three Audi RS Q e-tron hybrid rally cars that featured electrically powered four-wheel-drive from two Formula E MGU05 electric motors with a combined 386-horsepower, augmented by a DTM TFSI 2.0-liter four-cylinder gasoline engine that produces 270-horsepower. Audis had not been seen on the Dakar event since 1985 when the French private team Malardeau fielded three Audi Quattros.

All three of the Audi RS Q e-tron entries finished the world’s toughest off-road rally on their debut in Saudi Arabia. In total, they covered around 24,000 desert kilometers. Mattias Ekström/Emil Bergkvist finished ninth in Jeddah as the best Audi driver team. The hybrid Audi RS Q e-tron became the first car to take a stage win in the newly introduced T1-Ultimate category for vehicles running on alternative fuels when rally legend Carlos Sainz won the third stage of the event overall. Ekström and Audi driver Stéphane Peterhansel, each went on to take a stage win apiece while Sainz scored a second stage win. Sainz, a three-time overall winner of the Dakar Rally, ended the event in 14th place while Peterhansel, a 14-time winner of the Dakar Rally, had a variety of problems and finished in 154th place. Nasser Al-Attiyah from Qatar was the 2022 overall winner in a Toyota Hilux truck.

Audi has been involved in electric racing for the past seven years as a founding team of Formula E. The Audi Sport ABT team left the series at the end of 2021 after competing in 84 races and winning the championship in the 2016-2017 season with Lucas di Grassi driving. Audi left the single-seat electric racing series in order to put its resources into its Dakar Rally effort. 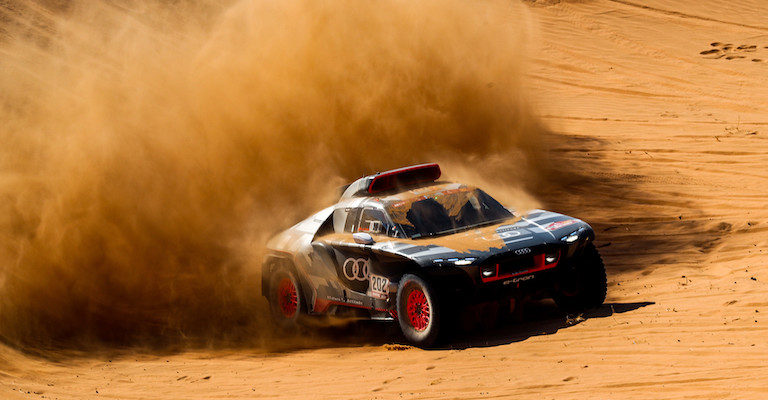 “Audi has lived up to its pioneering role in the Dakar Rally right from the start,” said Oliver Hoffmann, Audi Board Member for Technical Development in a company news release. “The alternative drive concept of the Audi RS Q e-tron has met all expectations with its electric drivetrain, high-voltage battery, and highly efficient energy converter. For more than four decades, our brand has repeatedly impressed with its innovations in motorsport – including in the world’s toughest rally.”