When Will Wireless EV Charging Hit it Big? 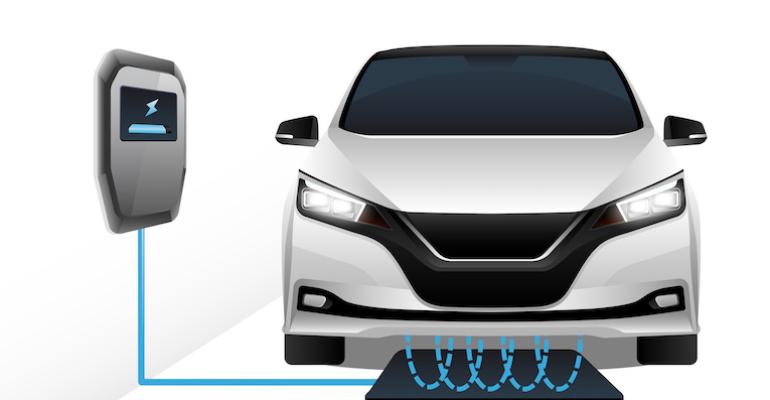 Replacing charging cables and plugs with a pad that you drive over could be the next big thing in EV ownership.

Imagine for a moment that you arrive home, driving your electric vehicle (EV). Entering your garage, you park your car and head into your house. The next morning your car is fully charged and ready to go. The only difference between this and any other EV owner is that when you arrived home you didn’t need to remember to plug the charging cable into your vehicle—a pad installed in your garage floor transmitted electrical energy to a receiver built into the bottom of your car. Wireless charging.

At first blush, the need to remember to plug in your EV every night seems like a first-world problem. As EVs move from enthusiastic early adopters to more mainstream users, however, finding ways to make electrification as seamless and easy as possible becomes more important. In addition, as taxi and rideshare fleets become more autonomous, driverless vehicles will need to recharge without a human presence to plug in their charging cables. Volkswagen has demonstrated a “charging robot” that scurries through a parking lot to plug-in EVs but charging through a wireless system is both more flexible and will likely be more adaptable to a variety of vehicle types.

Related: Electric SUVs Are Finally Arriving: We Can Help You Choose One That's Right for You

Experimentation with wireless EV charging has been taking place for more than a decade, and several companies have creative solutions, some of which have been implemented in trial versions. Two different systems have risen above the others. With Inductive charging, a magnetic-resonance field is created between a transmitting pad on the ground (which is physically connected to the grid) and a receiving pad on the bottom of the vehicle. The system senses when a vehicle is in place and wireless signals start and stop charging. WiTricity claims that its resonance inductive wireless charging has an efficiency between 90 and 93 percent.

In October 2020, the Society of Automotive Engineers (SAE) announced the first global standard for wireless electric-car charging. SAE J2954 applies to inductive-charging systems up to 11 kilowatts and allows increased interoperability between vehicles from different manufacturers.

Capacitive couple uses a pair of capacitively coupled plates (one on the ground and one under the vehicle) along with an inverter that converts the DC input voltage to a higher voltage, high-frequency AC voltage. The high voltage from the coupling plate in the road then transfers power between the air gap between the plates. Once the voltage moves to the vehicle, the voltage is stepped down with a matching network and converted back to DC to charge the EV's battery. The system doesn’t require iron materials to guide the magnetic fields, making the system lighter, smaller, more cost-effective, and easier to incorporate on roadways and an inductive charging system.

Thus far, resonant inductive wireless EV charging systems have accounted for the largest share of the overall wireless electric vehicle (EV) charging systems market. There has been an increasing implementation of pilot projects with leading automotive OEMs interested in the integration of resonant inductive power transfer technology into their vehicles. Inductive systems do not have drawbacks related to close coupling and alignment of coils required to transmit power between the primary and secondary coils, which can be an issue with capacitive coupling.

In addition to static wireless charging, investigations are also underway to charge EVs dynamically, while they are moving. A 2019 project in Sweden named "Smartroad Gotland"  installed inductive charging equipment on a road between the airport and the town of Visby, on the Swedish island of Gotland. The charging system is made from rubber-wrapped copper coils buried in the roadway at a depth of about 3 inches deep and powered by the grid. Electrically-powered trucks are equipped with five receiver coils that allow them to inductively draw current.

Testing took place over a week and a half during Swedish winter conditions that included and rain. The test truck was able to charge both while stationary and while driving over a 164-foot section of road at speeds up to 18 mph, charging at a rate of 45 kilowatts, according to Smartroad Gotland. Electreon, the company that provided the Smartroad system in Sweden is testing dynamic wireless charging on a short bus route in Tel Aviv, allowing an electric bus to recharge as it drives along a stretch of road.

Static or dynamic, the wireless EV charging market is set to grow—it will reach more than $827 million by 2027 according to a recent study. As it grows, both for commercial vehicles and with home systems installed in private garages, wireless charging will be just one more factor driving the rapid growth of electric vehicles.