Who Will Miss CHAdeMO Charging When Electrify America Pulls the Plug? 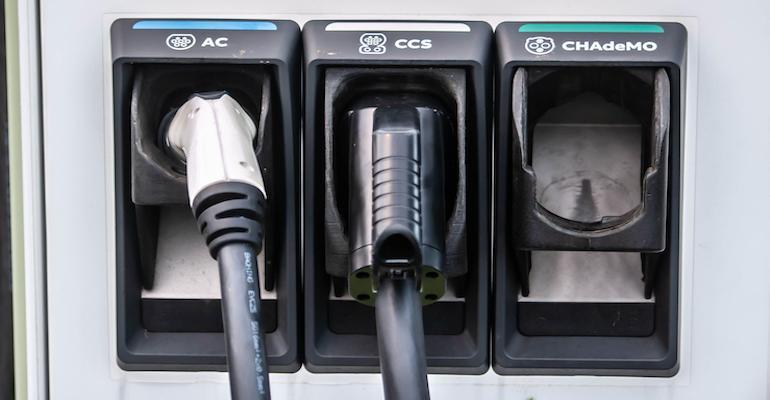 Right now there are three charging standards for electric vehicles—that is about to go to two as CHAdeMO appears ready to hit the exits.

Electrify America (EA) has announced that it will phase out CHAdeMO connectors in its charging system in 2022. What do all those letters stand for and what does EA’s announcement mean?

The CHAdeMO Association was formed in 2005 by the Tokyo Electric Power Company (TEPCO), Nissan, Mitsubishi, and Fuji Heavy Industries (Subaru).  Toyota, Hitachi, Honda, and Panasonic later joined the Association. CHAdeMO is a somewhat clumsy abbreviation of "CHArge de MOve", or "move using charge." The goal was to develop a public infrastructure of fast chargers to let people drive EVs without worrying about range.

Two of the early EVs from Japan, the Nissan Leaf, and the Mitsubishi i-MiEV came with the CHAdeMO system. Meanwhile, Tesla introduced its Supercharger network in 2012, using its own proprietary connector. A group of seven car makers (Audi, BMW, Daimler, Ford, General Motors, Porsche, and Volkswagen) agreed in late 2011 to introduce yet another charger connector called Combined Charging System (CCS) in mid-2012.

Adapters have been developed to allow interconnection between CHAdeMO, Supercharger, and CCS but having three confusing and competing standards does not seem like the best way to grow electrification.  Each of the charging systems has had its promoters and as of April 2019, there were roughly 25,300 CHAdeMO chargers globally, with 9,200, in Europe, 7,600 in Japan, and 3,200 in North America. But CCS had become more popular for non-Japanese manufacturers, while Tesla has steadfastly stuck with its own connector in the US but has switched to CCS in Europe. For a long time, a CHAdeMO adapter was the only way to fast charge Tesla vehicles outside of the Supercharger network. In late-2020 however, Setec Power released a CCS to Tesla adapter and unlocked CCS chargers to Tesla drivers.

Nissan, the last manufacturer producing CHAdeMO vehicles for the North American market has launched the new 2021 Nissan Ariya EV with a CCS charge port rather than the CHAdeMO that had been on the Nissan Leaf during the previous ten years. Proof that CHAdeMO is on its way out.

Meanwhile, only about 9% of all EV charging by Electrify America went through CHAdeMO connectors in the first quarter of 2021, so keeping it around doesn’t make much sense to the company. EA says it will no longer install CHAdeMO connectors on its EV chargers beginning in January 2022. According to information from EA, “Electrify America will focus its Cycle 3 investment on the future of electrification and deploy CCS as the non-proprietary standard at our stations. This action helps to reinforce the automotive manufacturers’ convergence on a single standard, reduces customer confusion, reduces capital and operating costs, and ultimately is expected to lead to increased EV adoption.”

In other words, goodbye CHAdeMO.