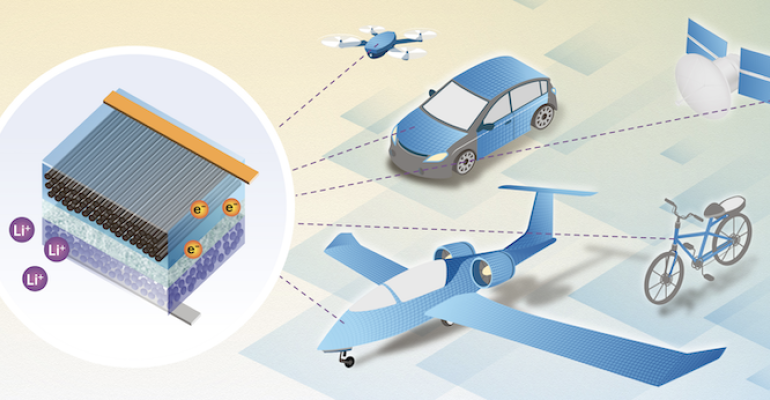 Making the battery an integral part of the structure could make products like EVs lighter and perform better.

Electric vehicles (EVs) are making strides in range, performance, and cost, thanks in large part to innovation and development of the lithium-ion battery systems that power them. Work is underway to reconfigure how the batteries are placed within the EV and one of the more interesting projects is the structural battery concept from Chalmers University of Technology in Sweden.

Carbon Fiber is a Key

Most recently, the researchers at Chalmers have begun using carbon fiber materials, both for their strength and their electrical performance. “Previous attempts to make structural batteries have resulted in cells with either good mechanical properties, or good electrical properties. But here, using carbon fibre, we have succeeded in designing a structural battery with both competitive energy storage capacity and rigidity,” explained Leif Asp, Professor at Chalmers and leader of the project in a university news release.

The new battery has an energy density of 24 Wh/kg, which is only about 20 percent of the capacity of commercial lithium-ion batteries. But because the weight of an EV can be greatly reduced without a separate pack made up of battery modules, less energy is required to move the vehicle at comparable speeds and performance levels. With a stiffness of 25 GPa, the structural battery can be used in place of other common structural materials.

The Chalmers structural battery has a negative electrode made from carbon fiber and a positive electrode from aluminum foil coated with lithium iron phosphate (LFP). The electrodes are kept apart by a fiberglass fabric that is saturated with the electrolyte. This is only a starting point, however as a new version, financed by the Swedish National Space Agency will replace the aluminum foil of the positive electrode with carbon fiber that can act as an additional load-bearing material. They estimate that the new structural battery will achieve an energy density of 75 Wh/kg and a stiffness of 75 GPa, which is about as strong as aluminum but with lower weight. “The next generation structural battery has fantastic potential. If you look at consumer technology, it could be quite possible within a few years to manufacture smartphones, laptops, or electric bicycles that weigh half as much as today and are much more compact”, said Asp.

Although the obvious application for structural batteries is the rapidly growing EV market, it isn’t hard to imagine a variety of uses for a strong, lightweight product that has the battery built into it as an integral part. “We are really only limited by our imaginations here,” noted Asp. “We have received a lot of attention from many different types of companies in connection with the publication of our scientific articles in the field. There is understandably a great amount of interest in these lightweight, multifunctional materials.”