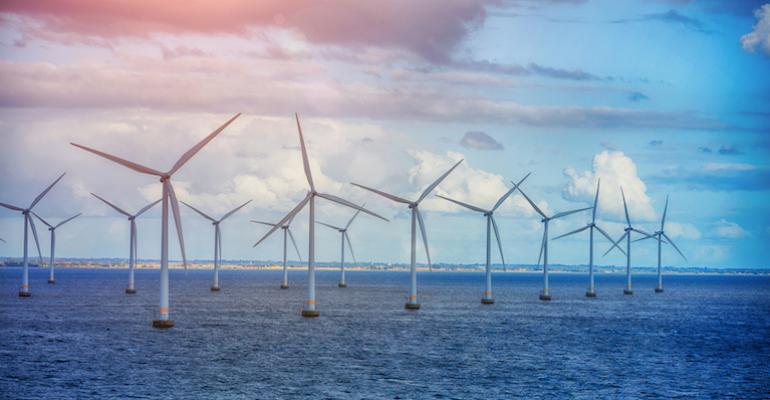 Buoyant energy storage under the sea could be a way to store renewable energy without using electrochemical batteries.

Batteries are electrochemical devices that store electrical energy through ionic interchange and reactions between a cathode and an anode. Every once in a while, however, a system appears on our radar that stresses energy storage through other than electrochemical means. Most typically this takes the form of compressing and storing air in huge underground caverns and releasing it through an air turbine to generate electricity, or what’s called pumped hydro, where water is pumped into an uphill reservoir to store energy, and then run through a waterwheel or turbine to generate electricity as it flows downhill.

Here is another one of these systems.  Researchers at the International Institute for Applied Systems Analysis (IIASA) are exploring the potential of a lesser-known, but promising sustainable energy storage system called Buoyancy Energy Storage.

“Buoyancy Energy Storage Technology (BEST) can be particularly useful to store intermittent energy from offshore wind power plants, especially in coastal regions and small islands. As an added benefit, the same technology can be used to compress hydrogen and transport it underwater,” IIASA researcher Julian Hunt explained in an IIASA news release.

The Buoyancy Energy Storage system consists of floating platforms placed close to offshore wind farms. It uses an electric motor/generator for storing energy by lowering a “compressed gas recipient”, usually a series of balloons or tanks. The system works best in locations with deep-sea floors. To recover the stored energy the compressed gas recipient rises through the water, turning a generator to produce electricity. Hunt and his colleagues introduced a series of high-density polyethylene (HDPE) plastic pipelines arranged vertically to form a cube, coupled with an anchor system connected to the seafloor. 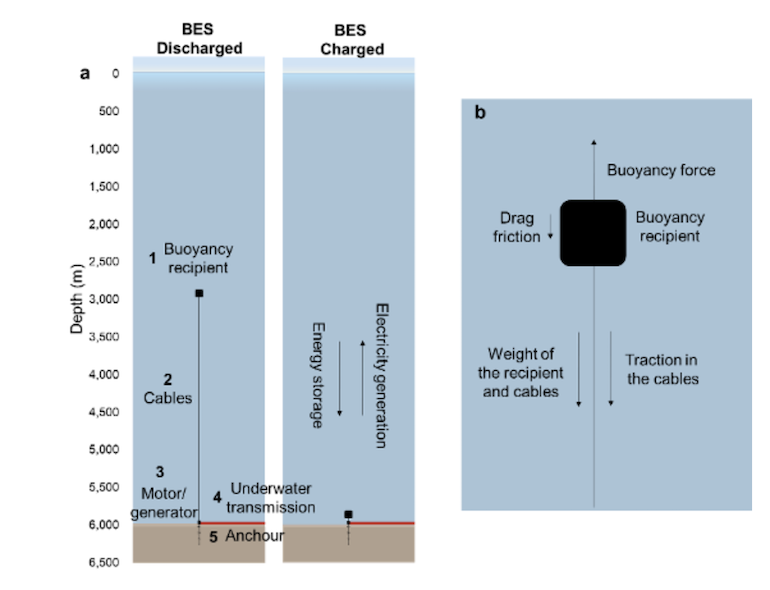 Buoyancy Energy Storage, (a) the system and main components, (b) forces exerted in the buoyancy recipient.

The team performed several simulations to test their version of the system and to determine the potential for storing energy at different ocean depths. They found that the deeper the system, the less the volume of compression gasses varies with depth and the more energy the system stores. However, installing the system at a greater depth comes at a higher cost. Even so, they determined that the cost of using a BEST system to store energy was lower per megawatt-hour (MWh) when compared to the cost of using conventional battery systems.

Not only can the BEST system be used to store energy from wind turbines, but it can also be used to compress hydrogen for storage and transportation. According to the IIASA researchers, “the investment costs associated with compressing hydrogen using BEST systems are around 30 times lower than it would be using conventional compressors, and the process involved would have the added benefit of significantly reducing the energy consumption in compression.” Once the hydrogen is compressed underwater, it can be contained in a pressure tank and brought to the surface, or it could be transported in large, deep underwater pipelines partially filled with sand. According to the team, the sand acts as ballast so that the pipeline remains at the designed depth and can be fixed to the bottom of the ocean with anchors. “Such hydrogen and sand-filled pipelines combined with BEST systems have the potential to become the backbone that sustains the future hydrogen economy, connecting all continents,” Hunt said.

Intermittent energy resources, such as wind turbines require energy storage to operate effectively. With growing interest in offshore wind energy, the IIASA buoyancy energy storage concept could be an interesting alternative to electrochemical storage—particularly as clean and environmentally friendly storage could take place nearby the point at which the energy is generated.

Will Hydrogen-Powered Cars Finally be Possible Thanks to a New Set of Tools?
Jul 01, 2021