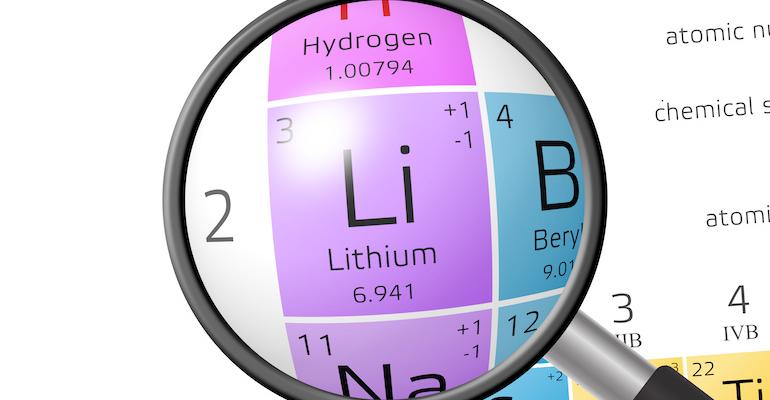 The design depends upon a clean interface between the electrolyte and the electrode, researchers in Japan have found.

Solid-state lithium batteries (SSLBs) are one of the devices scientists are eyeing to overcome some of the issues with current commercial lithium batteries, which use liquid electrolytes. However, to date, there have been limitations with solid-state designs that so far preclude their widespread use.

A team of scientists in Japan has come up with a new solid-state design that potentially can solve one of the device’s key issues—capacity. A collaborative effort from Tokyo Institute of Technology (Tokyo Tech), Tohoku University, National Institute of Advanced Industrial Science and Technology, and Nippon Institute of Technology demonstrated how the capacity of current solid-state lithium devices can be doubled, as well as be tuned to provide other benefits over lithium-ion batteries.

Researchers found that what’s essential to developing a high-capacity solid-state lithium battery is the interface between the electrolyte and the electrode, they said. Specifically, a clean interface facilitates the charge-and-discharge process in a way that creates a potential for capacity on par with commercial devices, researchers said.

"Our findings indicate that the formation of a contamination-free, clean [electrode/electrolyte] interface is key to increasing the capacity of SSLBs while ensuring low interface resistance for fast charging,” noted Assistant Professor Hideyuki Kawasoko of Tohoku University, in a press statement.

Related: Investigating the Nature of the Solid Electrolyte Interphase 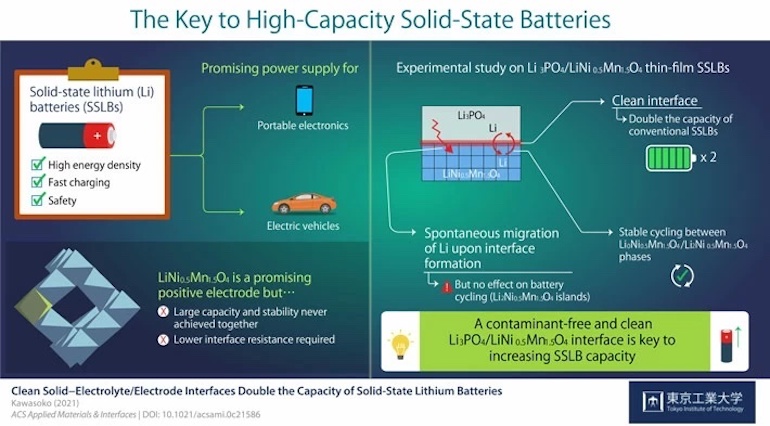 Researchers in Japan said a clean interface between the electrode and electrolyte in a solid-state lithium battery is key to solving typical capacity issues.

Lithium-ion batteries are used to power everything from iPhones to electric cars but come with highly publicized dangers—such as catching fire or exploding—due to the formation of dendrites inside the electrolyte that can cause fluid to leak.

This type of battery also has issues in terms of sourcing some of the materials used—which is expensive and ethically questionable—as well as limits to storage capacity and durability that make them less suited to emerging applications such as electric vehicles.

SSLBs—which comprise solid electrodes and a solid electrolyte that exchanges lithium (Li) ions during charging and discharging—solve the danger issue and have a high energy density, but so far have had issues with energy capacity in particular that have limited their use.

To solve these, the team in Japan focused on using spinel-oxide electrode materials comprised of lithium, nickel, and manganese, particularly one called LiNi0.5Mn1.5O4 (LNMO) that already has shown potential for generating higher voltages in devices, said Professor Taro Hitosugi from Tokyo Tech.

Previous research had hinted that simply by producing a clean interface between the electrolyte/electrode interface in a solid-state device could achieve low interface resistance and fast charging in devices using LNMO, he said.

Scientists also noted that lithium ions in solid-state devices made using LNMO would spontaneously migrate from electrolytes comprised of Li3PO4 (LPO) to the LNMO layer upon fabrication. This would form a phase of a new material, Li2Ni0.5Mn1.5O4 (L2NMO), in the batteries, the distribution and impact on battery performance of which was not known.

The team set out to investigate this phase, observing the changes in crystalline structure between the Li0Ni0.5Mn1.5O4 (L0NMO) and L2NMO phases during charging and discharging. They also studied how L2NMO was distributed at clean interfaces between electrode and electrolyte as well as what the effect of electrode thickness had on performance.

“In this study, we showed battery operations at 2.9 and 4.7 V, and simultaneously achieved large capacity, stable cycling, and low resistance at the electrolyte/electrode interface,” Hitosugi said in a press statement.

Researchers published a paper on their findings in the journal ACS Applied Materials and Interfaces.

The team said their work paves the way for solid-state battery designs for various applications where lithium-ion batteries are used, from mobile devices to electric vehicles (EVs), providing a stable and safe option to commercial batteries.